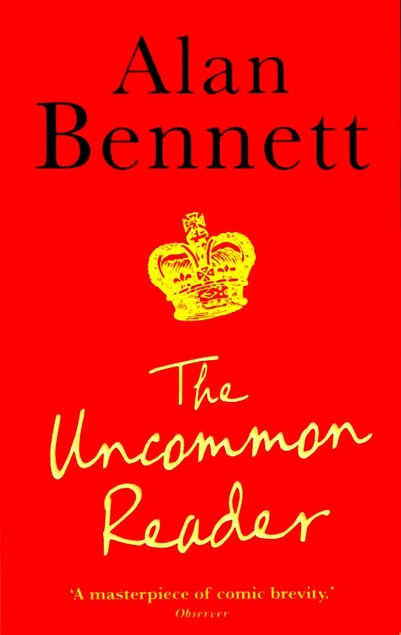 The Uncommon Reader by Alan Bennett was first published in 2007 and I remember when it was published that there was quite a lot of talk about it, presumably because of the subject matter. Bennett’s main character is of course the Queen, I suppose the ultimate uncommon reader.

Despite the fact that she owns several properties which have libraries in them the Queen has apparently never been much of a one for reading for pleasure, she has after all to do all that reading of ‘the boxes’ every day, so it’s obviously something which she would see as a duty rather than a pleasure.

Whilst walking one of her corgis she spots an unusual vehicle parked around the back of Buckingham Palace and she goes to investigate. It’s a mobile library and there seems to be only one member of the palace staff who is interested in borrowing books. He’s a young red-headed chap called Norman who spends most of his time stuck in the kitchens as apparently he isn’t good looking enough to be one of the pages, according to the equerries. He is of course gay as working for the Queen does seem to attract chaps of that inclination for some reason.

The Queen feels that as she has discovered the library she should choose a book and she plumps for one by Ivy Compton-Burnett. Mr Hutchings the mobile library driver suspects that she won’t enjoy it, and he’s right but it doesn’t put the Queen off and she’s back the next week to see what else she can borrow. The Pursuit of Love by Nancy Mitford is the next one that she tries and she’s hooked.

Late in life she develops a love of reading and she realises what she has missed all these years, she has such a lot of catching up to do. But her staff don’t approve of this change in her, as far as they’re concerned it makes her far more difficult to deal with. She realises that over the years she has met famous writers but she didn’t have any idea what they had written and she longs to ask them questions now, too late as many of them are dead. She does decide to invite a lot of authors to a bit of a do at the palace but it wasn’t a great success and she comes to the conclusion that they are probably best avoided but it doesn’t put her off their books.

The palace equerries though decide that things have gone far enough and they manage to get Norman out of the picture, they think he has too much influence with the Queen and are frankly jealous of him. It shows you how easily supposedly powerful people can be manipulated. As you would expect from Alan Bennett though, there are plenty of amusing moments.

This is one of those books that I just wished was actually true, because books are a great way of gaining insight into other people’s lives and different situations. Reading books would be the best way of seeing what ordinary people’s lives can be like, if you are not living in normal society.

This is a very quick read at just 121 pages and massive print.

The blurb on the back says: ‘A gloriously entertaining comic narrative, but it is also much more: a deadly serious manifesto for the potential of reading to change lives.’ Edward Marriot, Observer 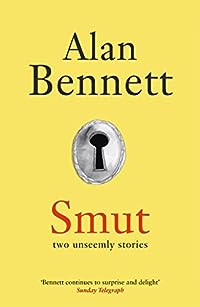 Well I had already finished reading Smut – two unseemly stories – by Alan Bennett, when fellow blogger Jo @The Book Jotter mentioned that it probably wasn’t a good one to start with as I hadn’t read anything by him before. I know what she meant as I’m sure it’s not typical of his writing as it is fairly smutty as you would expect from the title, it isn’t one to give to your strait-laced aunties or grannies.

Smut contains two novellas, or two long short stories, whichever you prefer. The first one is called The Greening of Mrs Donaldson which is about a middle aged widow who is struggling money wise after the death of her husband. She takes in a couple of lodgers, student medics, and they encourage her to get some part time work at the local teaching hospital. So far so ordinary, but things do take a turn to the more risque side of things, not really my cup of tea.

The second one is The Shielding of Mrs Forbes. You’ll not be surprised to learn that Mrs Forbes is – a middle aged woman. She’s a bit of a harridan, obsessive about her darling son, and Mr Forbes is really of no interest to her at all. This story is a bit more straight forward, hmm, perhaps that’s not quite the right phrase, given the subject matter.

Anyway, the stories were okay-ish. The blurb on the back says that they are naughty, honest and funny. The Radio Times said – ‘Hugely entertaining… an absolute joy’. But I’ll stick with my okay-ish!

For me, silence is never golden as I suffer from tinnitus, so I like to have some nice background noise as often as possible, so that the ringing noises are drowned out.

So when I’m in the kitchen I always have a radio on. We have two there, one of which is permanently tuned to 5 Live, which can be quite annoying because most of the time they seem to be talking about football. Plus they speak as if it is actually important, when IT IS ONLY A GAME.

The other radio was a present from son number 1 – a digital one which is retuned often. I love the World Service but quite often it is engulfed by football too. Radio Scotland is good for more local news and travel reports.

On Sunday I’ve been listening to Jarvis Cocker on Radio 6 whilst I’m cooking the Sunday roast and probably won’t be able to do so for much longer as it is in line to be cut in order to save money. We all know a much better way of making cutbacks, just half the pay of the fat-cats at the BEEB, they’ll still be getting too much money even then.

I’m maybe the last person in the world to have discovered Radio 7. Son number 1 steered me towards it one night last week and they were transmitting programmes from 1943. I think it was a celebration of the BBC’s 21st birthday. Great stuff. So during this week I’ve been listening to Alan Bennett and Nick Hornby giving readings.

Of course I can always listen to it on the iPlayer too. It helps to drown out not only the tinitus, but also the horrible noises which our computer is making from time to time. I think it must be on its last legs, poor thing.