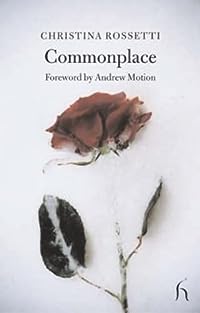 Commonplace by Christina Rossetti is one of the books that I bought at the Christian Aid book sale in Edinburgh back in May. I must admit that until then I had thought that Christina only wrote poetry but this slim volume contains five of her short stories, although the first one is quite long at 60 pages. There’s a foreword by Andrew Motion.

I quite enjoyed the novella Commonplace, she was obviously influenced by Jane Austen and the problems that women had then. I think this one is the best.

The second one, called The Lost Titian, is her imagining the loss of a Titian painting.

The last three short stories I found to be too sentimental, maudlin and heavily saturated in Christian teachings – not my sort of thing at all.

I’ll give this book a 3 on Goodreads I think – and that’s me being quite generous.

Silver – Return to Treasure Island by Andrew Motion is obviously a continuation of Robert Louis Stevenson’s famous book, and although I’m not usually a fan of spin offs (or more often rip offs) of older books I thought this one would be worth a go as Andrew Motion was previously a British Poet Laureate and so would presumably have a more than pleasant way with words. And I was correct, his writing is often poetic and the book itself is beautifuly produced with lovely end-papers, built in silky book mark and artistic cover.

At the beginning it’s set in 1802 London where Jim Hawkins owns an inn by the Thames, he has named the inn The Hispaniola in memory of his Treasure Island days and his young son – also named Jim – does most of the work while his father regales the taproom regulars with his tales of past adventures on the high seas.

Young Jim is disgruntled with his life and ready for adventures of his own so when in the depth of the night he sees a mysterious boat from his bedroom window with the boatman beckoning to him, he can’t resist and hops onto the boat. It turns out that the boatman is a boatgirl, in fact she’s Natty, who explains that she is the daughter of Long John Silver who also happens to have a pub in another part of London, also on the banks of the Thames, he has called it The Spyglass.

Silver is on his last legs and worrying about money, presumably not having a lot to leave to his wife and daughter, so he has scraped up enough to equip a ship and crew to sail off back to Treasure Island to collect the silver which he knows is still hidden there.

Jim and Natty set sail for their journey, accompanied by Natty’s mynah bird which is called Spot – a nice touch that I think, a replacement for Silver’s parrot and also of course a reminder of the Black Spot, rolled into one. Motion also wrote a certain Mr Stevenson into the story as a member of the crew.

All in all this was an entertaining read, aimed at children I suppose (well I found it in the children’s section) but suitable for children of all ages.