We visited Pitmedden Garden when we were in Aberdeenshire recently. It’s a place that I have wanted to visit for something like 40 years after watching the early days of the Scottish gardening programme The Beechgrove Garden, because one of the presenters – George Barron – was the head gardener at Pitmedden then. 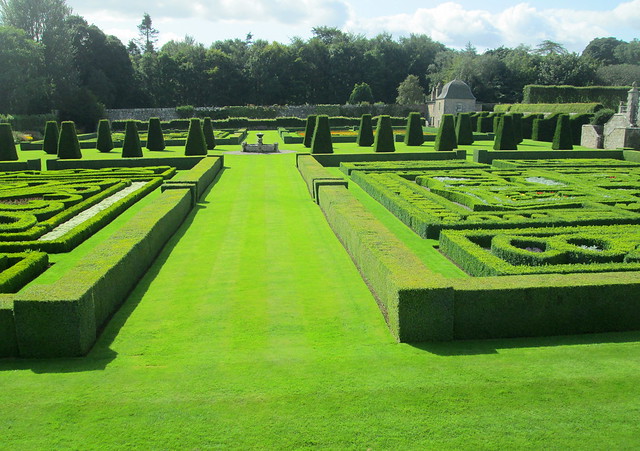 Apparently I took 42 photographs while we were there, but I’ll just show you a few of them just now, to give you an idea what it’s like if you’ve never been there. 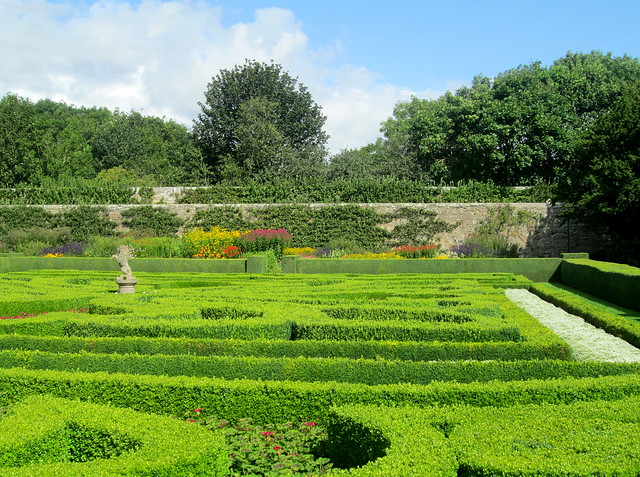 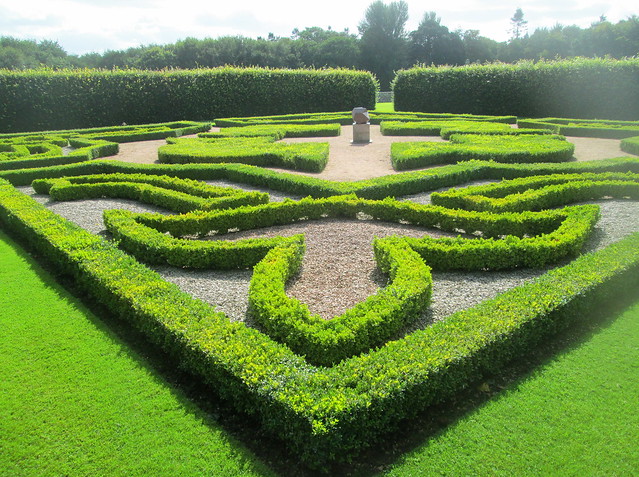 The garden is a wonderful knot garden with over six miles of clipped box and yew hedges as well as a fairly recently replanted orchard. Most of the trees in there are too new to have much of a crop, but the older trees which are trained against the tall stone walls were well laden. 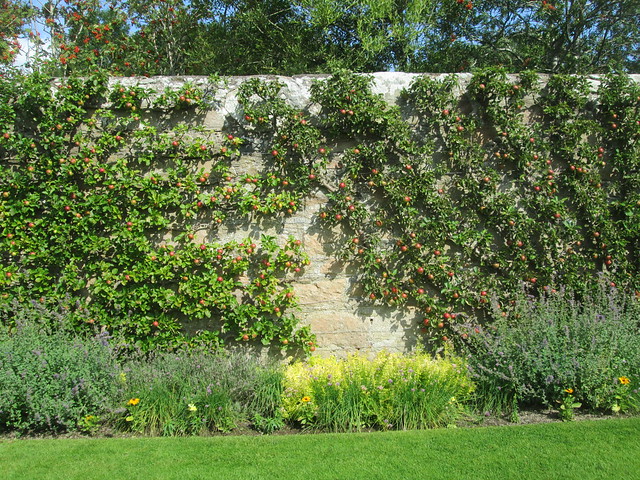 One of the great things about this garden is that despite the fact that its ‘bones’ are set in the intricate box patterns, it will still be ever changing as the spaces are planted up with seasonal bedding plants. The area in the photo below was filled with several different sorts of marigolds. I love the topiary yew buttresses aginst the walls in the background too. 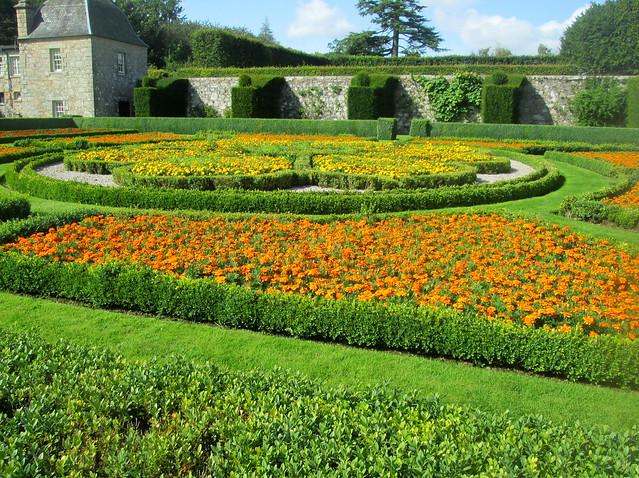 It isn’t all formal though, there are some lovely overflowing mixed herbaceous borders too. 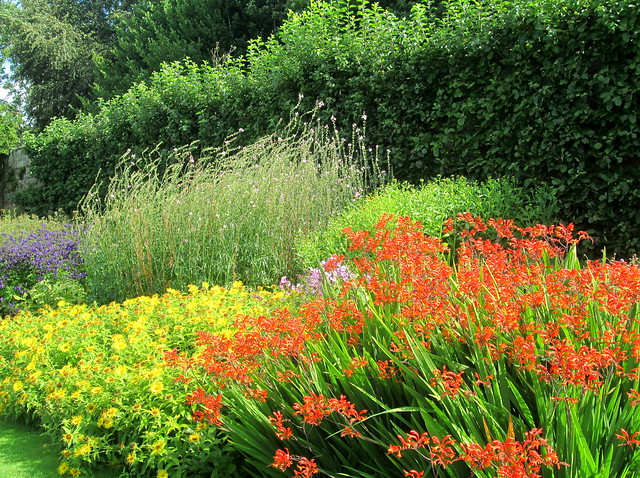 We were there quite early on a Saturday morning and almost had the place entirely to ourselves. It’s definitely worth visiting if you’re in Aberdeenshire.

Below is a You Tube video of the beginnings of Beechgrove Garden and you can see George Barron and Jim McColl chatting away, George had a lovely Aberdonian accent which wasn’t something I had heard much of back then. Occasionally he slipped into the ‘Doric’ but not often enough for my liking!

You might know that we’ve been planning on moving house for quite a while now, it’s time we downsized now that we have an empty nest, our house is actually up for sale at last. As neither of us come from Fife originally we thought it would be nice to move a bit closer to the west, maybe to the Stirling area as that’s nice and central for both east and west Scotland.

So on Wedenesday we thought we would drive to the Stirling/Clackmannanshire to do some more research on the towns and villages there. It was a gorgeous day, in fact a wee bit too hot. I had an idea that the village of Menstrie would be worth taking a look at. Scenically, it’s beautiful, just what I love with easy access to lovely hills, Dumyat in particular, and a woodland walk which we must try out some day when we have more time, but the town/village of Menstrie is really small and doesn’t have much in the way of anything amenities-wise. So we won’t be moving there. The trouble is that where we live at the moment is in a perfect location for shops, library, museum, theatre and of course a great park, I don’t think we could contemplate moving somewhere which doesn’t even have a teeny library, no matter how gorgeous the nearby hills are. From Menstrie we drove on to Doune which has a bit more life about it but still feels very rural, it isn’t so close to hill-walking areas. It does have an antiques centre though and we had a look around there, I didn’t buy any ‘stuff’ but did buy two books: Katawampus by Edward Abbott Parry and Keep the Home Guard Turning by Compton Mackenzie.

Then we went on to Bridge of Allan which I really like, it’s in a lovely setting, has a decent looking library and the Stirling Uni campus is on its doorstep which ensures there is a bit of life around the place, it isn’t preserved in aspic like some places. But house prices are quite a bit higher there, could we afford the sort of house that we would want to retire to?

We had dinner at Bridge of Allan and after that we had a walk around the town, there’s a bridge at the end of the main street, obviously what the town gets its name from as it spans the Allan Water. The town ticks quite a few personal boxes as I love to be able to stand in the middle of a town and look up and see hills, and I also prefer towns which have rivers running through them, and a bridge too of course. Jack spotted a heron standing really close to the bridge. I love them, they’re so patient and quite comical looking too, especially when the wind ruffles their feathers. Joan Kyler sent me this link to some gardens in that area which were featured on the Beechgrove Garden Bridge of Allan gardens, thanks Joan, yet again I’m getting ‘local’ info from someone 5,000 miles away!

It was a lovely drive back towards Fife in the late evening but when we got about five miles from Kirkcaldy the haar (sea mist) was rolling all over the place, it doesn’t half make the temperature drop. I wondered if it had been like that all day as sometimes happens on the Fife coast, that made the Central region seem all the more enticing, just think – no more haar!