I took a few photos of my garden last week when we were having a very long dry spell, since then we have had some much needed rain. Below is a photo of a blue clematis alpina which is against the fence, it’s my favourite clematis, of the ones I have anyway. There’s also an acer/Japanese maple on the right just coming into leaf. 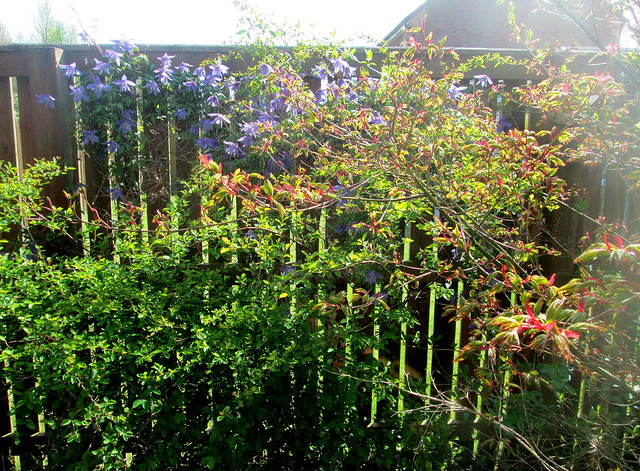 The patch below is the first area to come into flower as it’s where I have most of my snowdrops, but the narcissus, primulas, cherry blossom and heathers are flowering now. 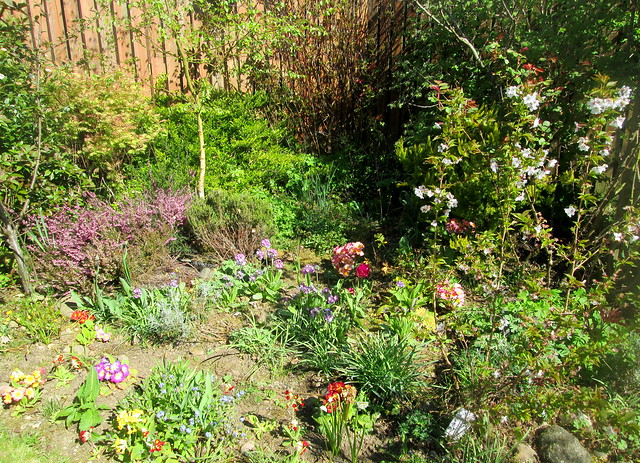 I feed the birds all winter but will be removing the last of the feeders when this one below is empty. The birds don’t need supplements over the summer. The tree the feeder is hanging on is a pear tree, very late in showing signs of growth but it has since begun to blossom. 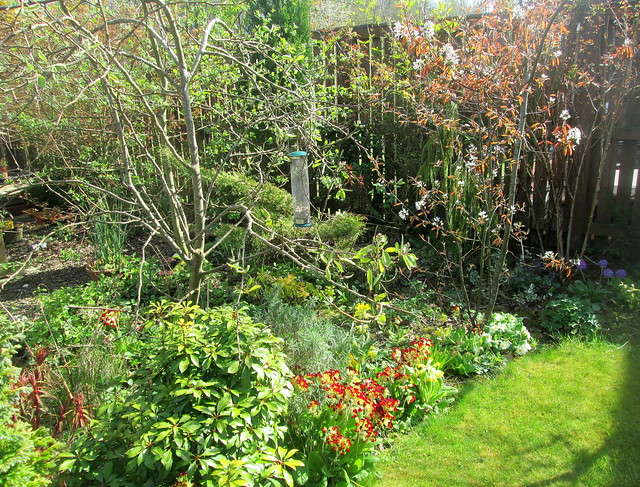 The photo below would have been quite nice if I hadn’t inadvertently left my weed bucket in view! On the far right is the remains of what was a giant cherry tree that I planted just a couple of years ago, it grew about 20 feet inside a few years, you wouldn’t think it was possible. Anyway, I realised it was going to be far too big for our garden so it has been reduced and the bark cut all around it as it was impossible to move it. I plan to keep the skeleton of the tree to grow my rambling rose Rambling Rector over it. It also produced loads of suckers from the roots. Whoever thought it was a good tree to sell to the general public was off their head. Very few gardens can accommodate a tree which apparently grows to 100 feet, something that the sellers kept quiet about! You live and learn. There are far too may trees in this garden, which I knew was a mistake, but I wanted them all, sheer greed. They are mainly small fruit trees though – apples, pear and plum. Fingers crossed we don’t get a late frost as we did last year and all the buds turned black and fell off. 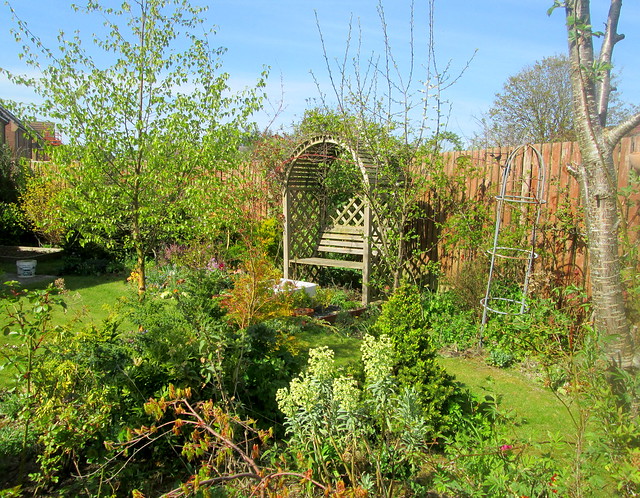 I had to trace the tree roots and pull them up where possible, that made a complete mess of the chips at the path and around the table which is to the left and out of view below. I thought it might settle down itself but it hasn’t, so that’ll be next on the agenda for needing attention. Since taking these photos the garden has been cleaned up and my brown bin is full of garden waste, but there’s yet more to do. A garden is always a work in progress! 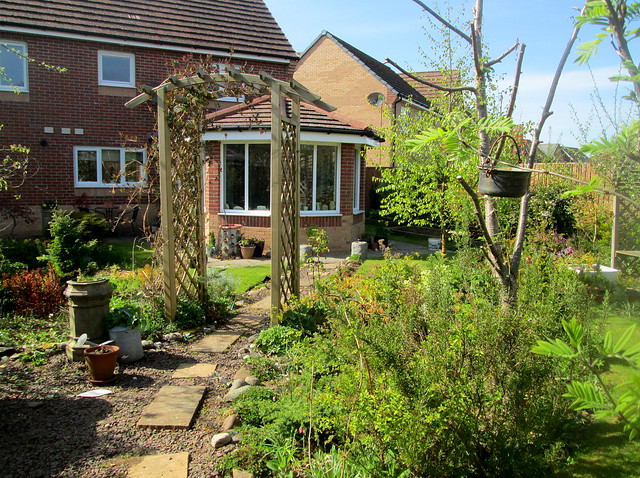 A few friends have asked me how my garden is getting on, and I have been taking photos of it over the past couple of months, but just haven’t got around to blogging about it. It has been a weird year weather wise. The spring weather was quite late in getting here, then we had a very dry period, particularly while we were away in Belgium and Holland in early May. My garden was gasping when we got back home.

But since then we’ve had a lot of rain and wind to contend with. In Scotland we didn’t get the really hot weather that they had in England and Wales earlier in July, we’ve been getting one good day of weather followed by three or four bad days, sometimes feeling more like November.

The plants are coping though. 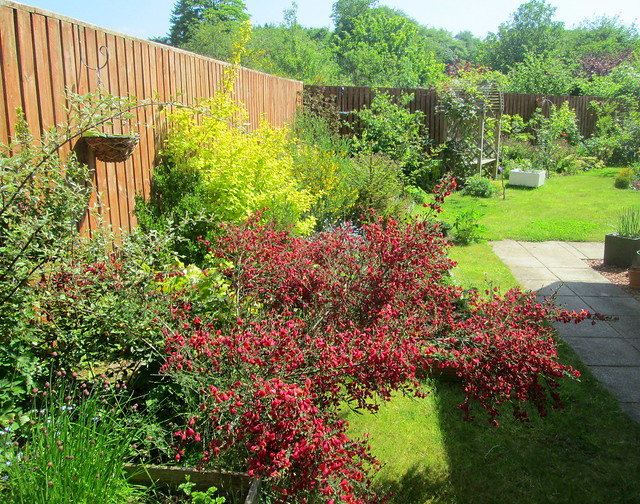 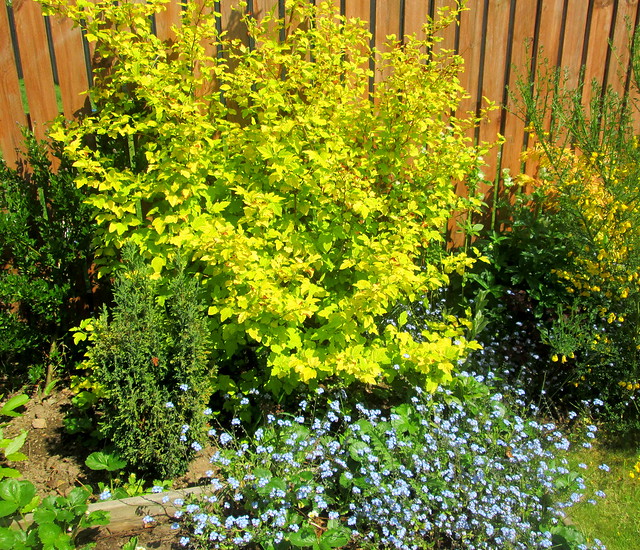 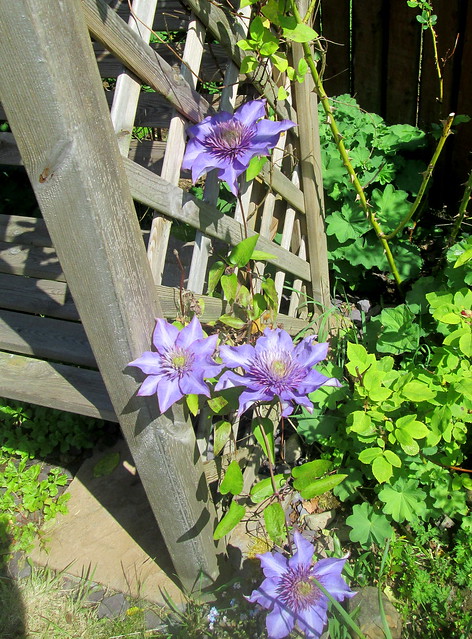 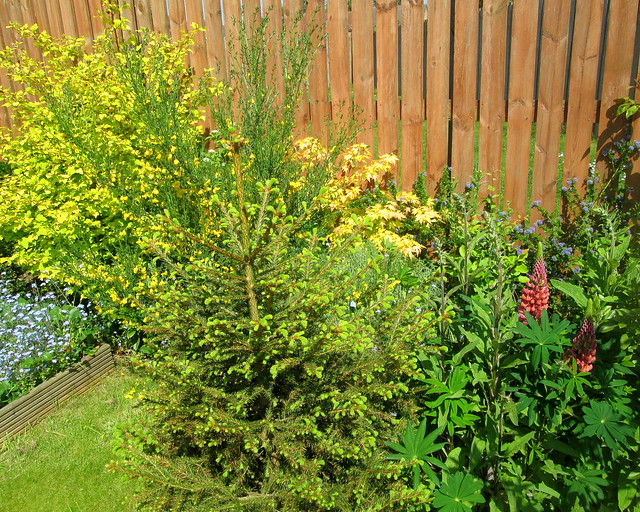 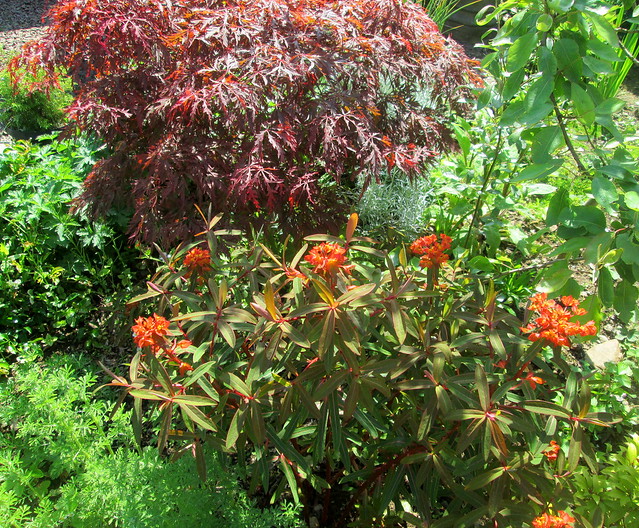 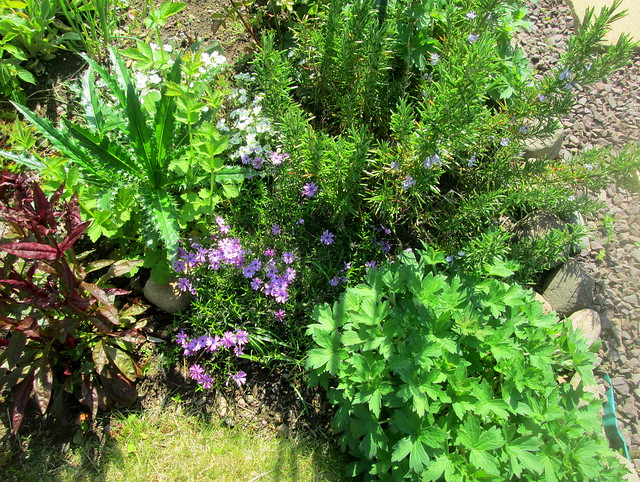 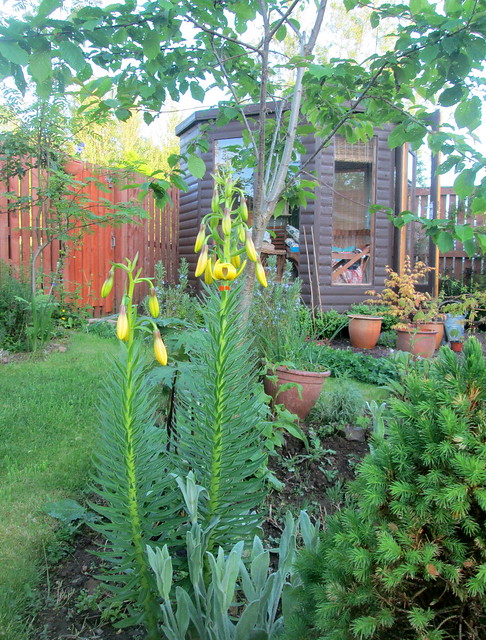 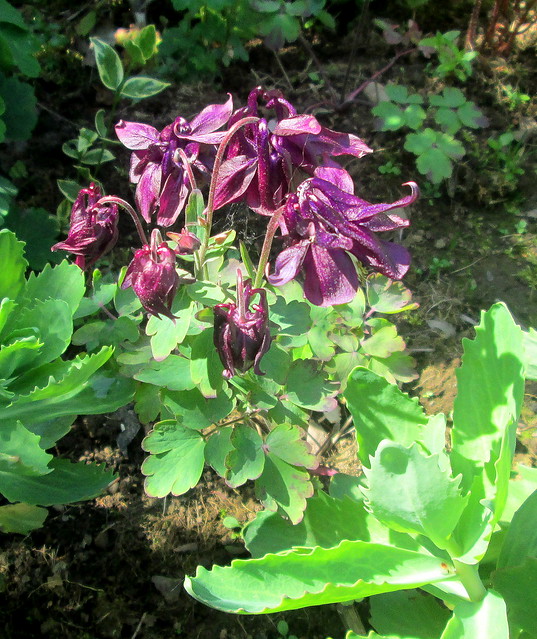 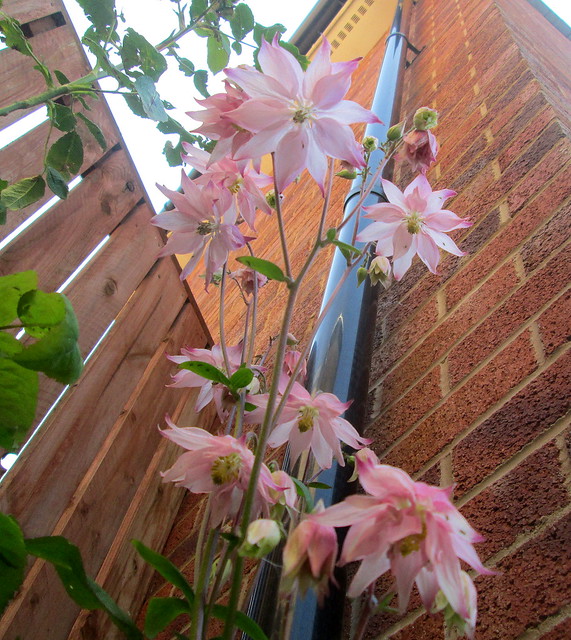 Most of those photos were taken in May so the garden looks quite different now, but I’ll leave those photos for another post! 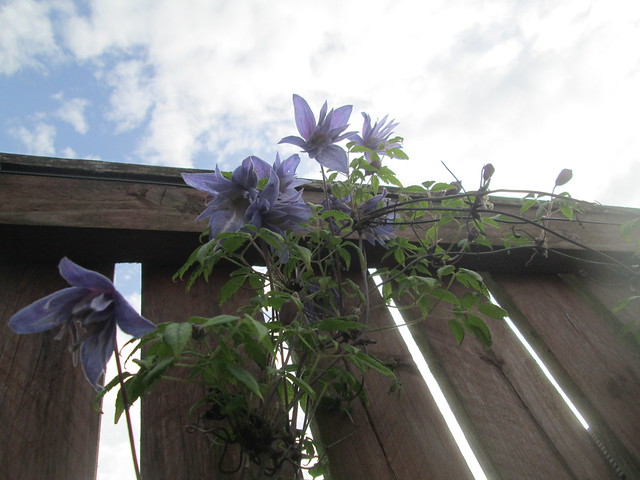 I had clematis alpina in my old garden, the one I worked in and planned for 26 years, and since moving to the new and at first very empty garden I’ve been planting a lot of my old favourites again, this one was a must have. I love everything about it, the shape, size, colour and the fluffy seedheads when the flowers have finished. 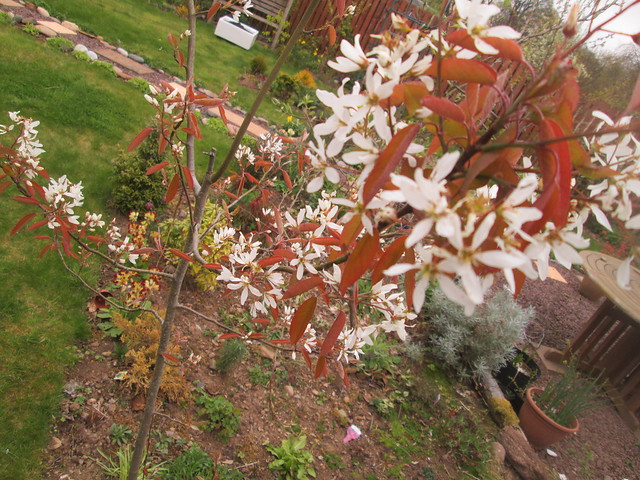 Amelanchier canadensis (above) is one of the several trees I’ve planted, in fact I probably have too many trees, if that’s ever a possibilty. The flowers don’t last very long but they’re worth having, very delicate looking and pretty, I’ve planted another specimen by the back fence but I think I might grow that one as a large shrub, hoping it’ll become nice and bushy. 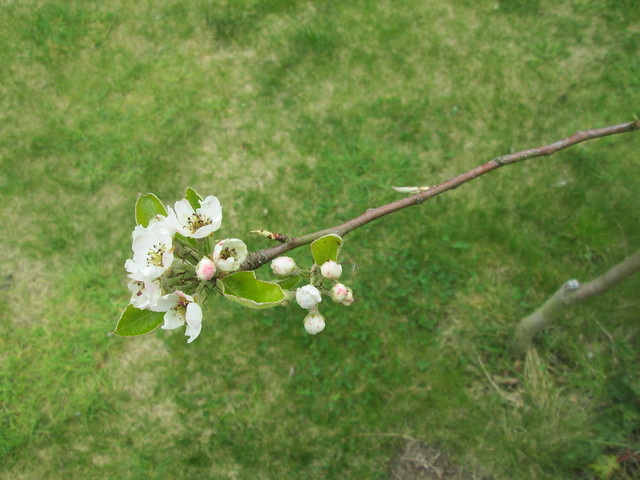 I’m fairly sure that the blossom in the photo above is apple, but then again it might be plum. Whatever, I’m just chuffed that several of my fruit trees are flowering for the first time since I planted them three years ago. 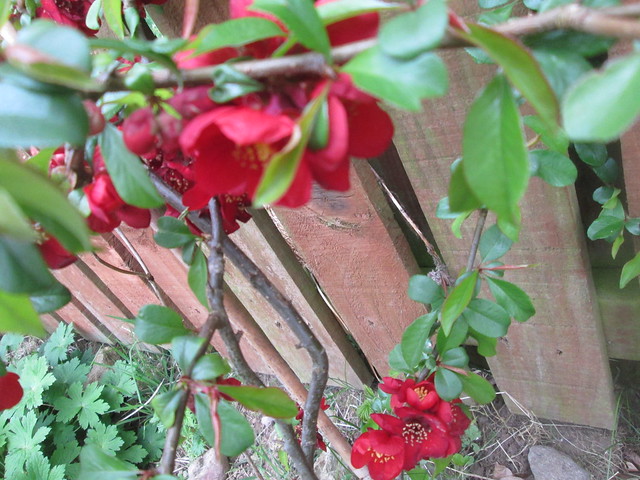 The photo of the ornamental quince above is a bit blurry, sadly this one doesn’t have the fab scent that the apricot coloured one in the old garden had. I’m still trying to track down a specimen of that one.

Below is a wee anemone, it survived the winter well and I’ve bought some more of them for the front garden. 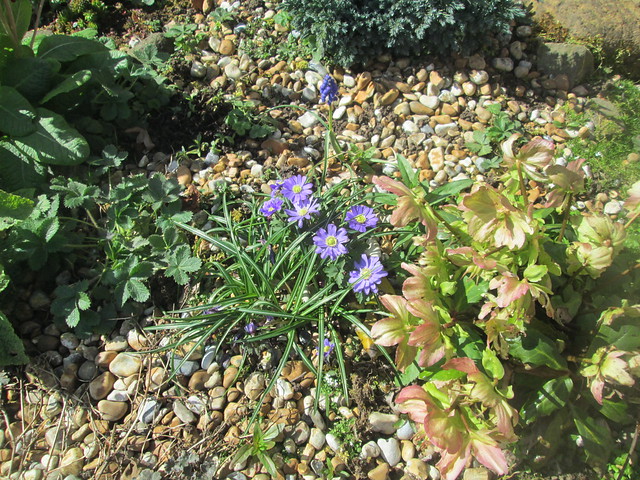 Fritillaries, I love them, but quite a few of the flowers have got holes right in the middle of the petals, it looks like something has chomped its way out of the buds. These ones are fine though. 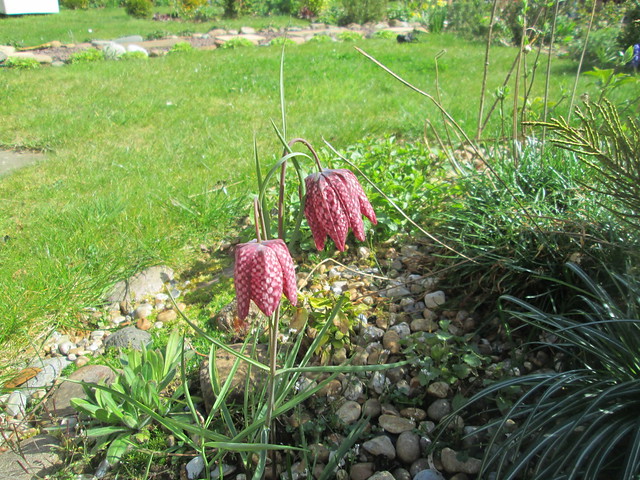 The auriculas below are plants that I’ve never grown before, I had always thought they wre too delicate and tender to be left out over winter in Scotland but these ones are thriving and will need to be split up when they stop flowering, which won’t be for ages. There was quite a craze for these plants, especially amongst the French Protestant Huguenots who fled to Britain to avoid persecution from the Catholics in France. 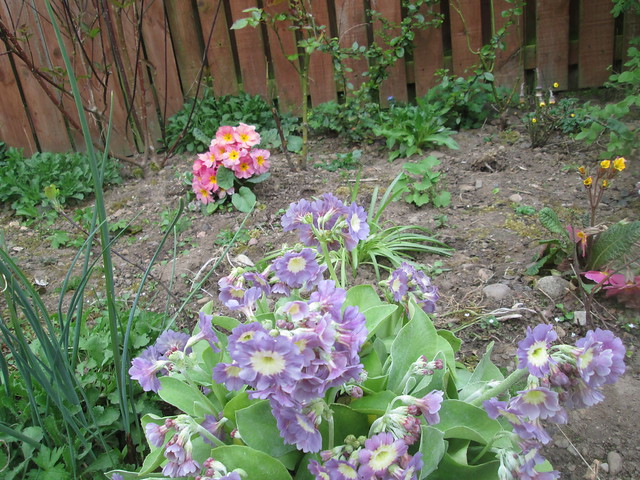 If you want to know a bit more about the plants and the Huguenots have a look here.