Exposure by Helen Dunmore was published in 2016. It’s a great read despite the fact that it has an uncomfortable atmosphere, and not just because she was writing about a character who had terminal cancer – as she had too.

The setting is 1960 Cold War London where Paul Callington has a ‘hush-hush’ job at the Admiralty. He’s married with three children and he’s happy with his life. His wife Lily is a part-time teacher and is able to help out with paying for luxuries and despite the fact that he has come to realise that his career has just about come to a standstill he’s not really bothered by it. Paul lacks ambition and in all honesty is a bit dim and lacking in common sense, despite having a decent degree from Cambridge – or possibly because of that!

When his older work colleague and old friend Giles has an accident and ends up in hospital he asks Paul to go to his flat and secretly take a file back to the office – a file that Giles should never have had at home. Loyalty to Giles makes Paul hesitate, he knows he should hand the file to his superiors and he also knows it’ll be hard to replace the file clandestinely.

One stupid decision leads to Paul being arrested as a suspected spy and his wife and family are ostracised and have to leave their schools and home.

Exposure is very like an updated version of The Railway Children in many ways with the three children – two girls and a middle boy and with a capable mother having to move to a rural location, and an innocent father in prison. But the atmosphere is more menacing with the family being in danger from the real spy.

This book was first published in 1954 but it’s 1948 when the story begins. Terrant is an Englishman working as a journalist in Berlin, he took up that career after spending four years in the infantry during the war, before being wounded. Berlin is an exciting place to be for a 32 year old bachelor like himself but when he meets Ellen Content he realises that he has found THE ONE.

Unfortunately she disappears after just a few days, and it seems to be linked with nefarious Cold War activities. Two years later Terrant sees her name printed in The Times. It says – “Among the other passengers is Miss Ellen Content of New York, who after a brief stay in England, is returning to America to fill a series of dancing engagements.” Apparently Ellen had sailed on the Queen Elizabeth and Terrant had to follow the lead.

I enjoyed this Cold War thriller and I’ll read more of her books if I ever find any, but I am a complete cynic and really had to suspend my disbelief at the thought of a hard bitten reporter immediately falling in love and pining for years for a woman he had only met a few times. But that’s probably just me, I have very little of the romantic in me, which is a jolly good thing, and I’m sure that’s why we’ve stayed married for nearly 37 years! 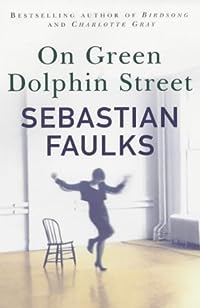 This one was bought at the most recent library book sale and it’s the first book by Faulks which I have read despite the fact that we have plenty of others in the house which my husband has read. It was first published in 2001.

The book is set in America mainly in 1959-1960 but World War II plays a part in that the main characters are still carrying around mental wounds which were inflicted by it.

Mary van der Linden is married to Charlie a high-flying British diplomat and they have two children. They’re the sort of people who I would hate to have living in the street because they make a habit of having parties into the wee small hours. Charlie’s hard-drinking is rapidly getting out of control and he’s slipping from being a high functioning alcoholic to an out of control liability. He has been trying to make money on the stock exchange and has even borrowed money to invest but he keeps losing money on his shares and they’re in a financially precarious position.

Mary’s life begins to fall apart when the children are sent off to school in England to take advantage of the subsidised private education available to the children of diplomats. The house is empty and Mary feels redundant and then she gets a phone call from her father telling her that her mother is terminally ill. Mary offers to go home and help with her mother but she isn’t wanted there and so she is left with just Charlie to look after, but he doesn’t even eat any more and she’s more of a mother than a wife to him.

Frank Renzo is a New York journalist who was a guest at one of the parties and he is smitten by Mary the minute he sets eyes on her. He’s trying to get his career back on track after being persona non grata during the McCarthy years. He’s reporting on the John Kennedy-Richard Nixon campaign. To begin with the whole thing is just a friendship with both Mary and Frank determined to be chaste but inevitably things progress and Mary finds it necessary to pretend that she is writing a book, and she needs to go to New York to do research for it. With Frank having to follow politicians around at short notice they don’t see much of each other at all. The title of her book is going to be ‘On Green Dolphin Street’. I suppose you could say that it was ‘their tune’.

Anyway, I enjoyed this book and I’ll read more by him now. It’s set in an interesting period with lots going on in it including the Cold War which I am now beginning to think of as ‘the good old days’.

Sebastian Faulks managed to make Mary van der Linden a likeable character which is really saying something coming from me because I really lack patience when it comes to married bed-hopping people in books or real life. As a friend of mine experienced in such matters once said that the romance goes out of it all the minute you start washing their socks and underwear and the bills start piling in. I almost bit my tongue off but I managed not to say what I thought which was – It was a pity she hadn’t thought before she wrecked another woman’s life and devastated three children. And that dear folks is the Presbyterian lesson for today!

Other people would say – life is short and you should grab it while you can.

Each to their own!

Back to the book, I did enjoy it, it wasn’t at all what I expected somehow. I didn’t know that On Green Dophin Street is a tune by Miles Davis. I know nothing about jazz beyond that there is ‘cool jazz’ and ‘when does the tune start jazz?’ I think this one must be cool.

There is a book called Green Dolphin Street which was written by Elizabeth Goudge in 1944.