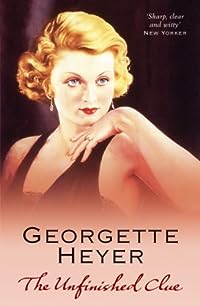 This book was first published in 1933 and for some reason seems much more like an Agatha Christie book than the others which I’ve read by Heyer. So if you’re a fan of Christie you’ll probably really enjoy this one. I didn’t dislike it but I was just a wee bit disappointed that there wasn’t much of the witty repartee in it which I’ve come to expect of Heyer. Maybe her humour was more a feature of the later books, it’s a shame really because as far as I’m concerned there’s always a place for a bit of fun, even when there’s been a murrrderr!

It’s a classic country house whodunnit, a favourite setting of mine and it’s a plus that I didn’t guess who the culprit was until very late on in it. Either my brain wasn’t in gear or it was more of a puzzle than the last P.D. James book which I read.

It wouldn’t be a Heyer without romance, she seemed to be incapable of leaving it out of any of her books. It’s daft how quickly it all happens though – certainly no problems with her men being incapable of commiting!

The blurb on the back of the book says:

‘Miss Heyer’s characters are an abiding delight to me… I have seldom met people to whom I have taken so violent a fancy from the word “Go”.’ DOROTHY SAYERS

I’m pleased that good old Dorothy was generous with her praise of another crime writer, it wasn’t always the case, especially with female crime writers. I believe Margery Allingham was a bit of a bitch where Sayers was concerned which must have been a bit awkward as they both lived just one train stop from each other and were often on the London train at the same time.

I do love vintage crime but feel that there are far more crime writers I should be giving a go. Any recommendations vintage or modern?