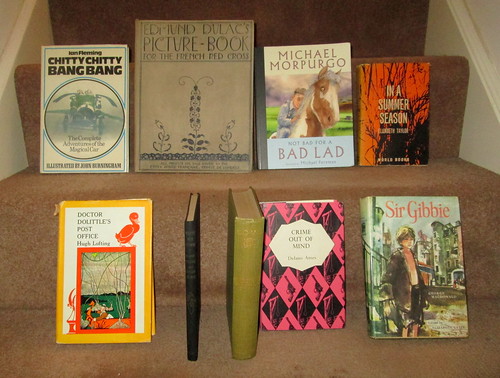 Above is a photo of the books which I bought over the weeks before Christmas – and said to Jack, just wrap those up for me! After so many years it isn’t crucial to get a sumptuous present and I’m in the happy position of not really needing or wanting anything expensive.

You’ll have noticed that my cache of books leans heavily towards children’s publications, that was just luck or serendipity, not something which I set out to do.

1. Crime Out Of Mind by Delano Ames. He was a 2014 discovery for me and I’ve read a few of his books, I’ve enjoyed them all and this is another Dagobert and Jane book, his married sleuths, so I have high hopes of it. It was published in 1956.

2. Sir Gibbie by George MacDonald. First published in 1879 this is a children’s book by a Scottish writer who used to be very popular but is now hardly read.

3. Love by Elizabeth von Arnim, published in 1925. I already have a copy of this but I had to buy this one when I saw it in its green binding, I have most of her other books in this guise and my other copy of Love is a modern paperback.

4. Doctor Dolittle’s Post Office by Hugh Lofting, first published in 1924. This is another children’s author which I missed completely as a youngster. There are a lot of books in the series and the Doctor Dolittle film was based on them.

5. Whizz for Atomms by Geoffrey Willans and Ronald Searle, published in 1956. I bought this because of the Ronald Searle cartoons, it’s a similar idea to the St Trinian’s books, it looks like a good laugh.

6. In a Summer Season by Elizabeth Taylor, published in 1961. I have read a fair few of her books and enjoyed them.

7. Chitty Chitty Bang Bang by Ian Fleming, this is an omnibus of the three stories which Fleming wrote in 1964 – 1965, but this book was published in 1971. I’ve already blogged about this one.

8. Not a Bad Lad by Michael Morpurgo and illustrated by Michael Foreman, published in 2010. I’ve not read anything by Morpurgo yet (I think) and it’s about time I did but to be honest I would have bought this book just for the illustrations because I’m a Foreman fan.

9. Last but definitely not least is Edmund Dulac’s Picture Book for the French Red Cross, published in 1915. As it says on the front cover, all profits on sale given to the Croix Rouge Francaise, Comite de Londres. Obviously to help with the First World War casualties. I was lucky to get this one at St Andrews for a reasonable price, there are people online asking silly money for it. Some of the stories are old faithfulls like Cinderella but there are a lot which I hadn’t heard of before. The illustrations are lovely and if you are interested you can download it free from Project Gutenberg here. 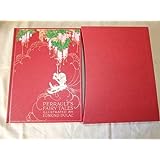 Anbolyn@Gudrun’s Tights has joined in a children’s literature challenge which you can read about here. Really this challenge is right up my street as I love children’s classics, but then again I promised myself that I wouldn’t join in any challenges this year – so I’m not doing it, but I will lurk around the periphery of it, just to see if there are any books which I should have read but haven’t.

Anyway, I had been planning to start a ‘Books from my bookshelves’ series of posts, a sort of – now and again thing, just whenever the urge strikes me – or as we used to say in Scotland – ‘when it comes up my back’ meaning just when I feel like it. Don’t ask me the origins of that strange Scottish phrase!

So, on that note I thought I would share with you one of my lovely Folio books. It’s Perrault’s Fairy Tales Illustrated by Edmund Dulac.

The Dulac illustrations are beautiful, as indeed is the whole book. This illustration is captioned AND THERE IN A ROW, HUNG THE BODIES OF SEVEN DEAD WOMEN. Well, fairy tales are all about warning youngsters of the dangerous situations that they might find themselves in if they aren’t careful! If you want to see more of Edmund Dulac’s work have a look here.