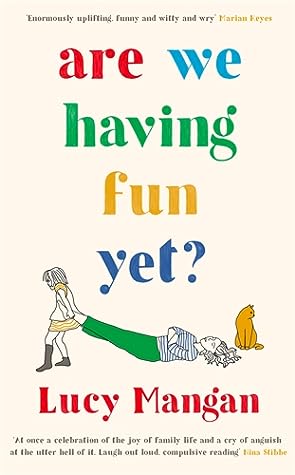 Are We Having Fun Yet by Lucy Mangan has its moments although at the beginning it reminded me far too much of the BBC TV programme Motherhood, without the diverse group of mothers that feature in that so comically. Liz and Richard are I suppose upper middle class – as is everyone else featured, it feels very autobiographical and to be fair anyone who has had children will recognise many of the situations as Liz struggles to deal with domestic angst, her two young children, and a husband who is somewhat semi-detached and in a world of his own.

As ever with this sort of writing it’s the children who are the stars and provide a lot of the humour. As a reader of Lucy Mangan’s articles since she began writing in the Guardian I had trouble separating her personality with that of Liz as it is so similar to her columns.

I found it annoying that Liz is so frazzled by childcare when she has very supportive parents living half an hour away, and that Liz (Lucy) describes herself as being ‘northern’ despite being brought up in the south of England. Having northern parents doesn’t count, where you went to school does!

Having loved Mangan’s Bookworm I found this one to be a bit disappointing and predictable but I suspect that as a granny and an actual ‘northern’ person, if you count Scotland as the north – but so many people don’t – I’m not the target audience.

I received a digital copy of the book via NetGalley. Thank you.