It can be quite surprising what you see when you visit castles in Scotland. When we went to Drum Castle in Aberdeenshire – I have to say a couple of years ago now, I didn’t expect to see an exhibition of textiles and clothes by Marian Clayden who I hadn’t heard of before but is very well known in her field of textiles and weaving. You can see my earlier posts on Drum Castle here. 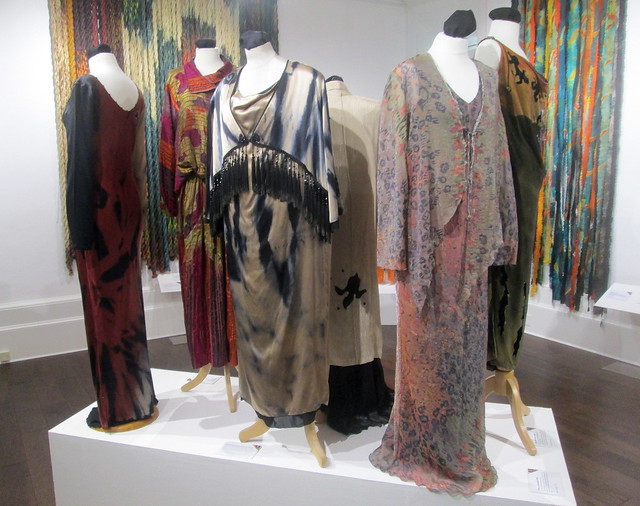 The photos really don’t do her work justice as you can’t see the textures so well. The fabric is mainly silk and velvet, absolutely sumptuous looking. 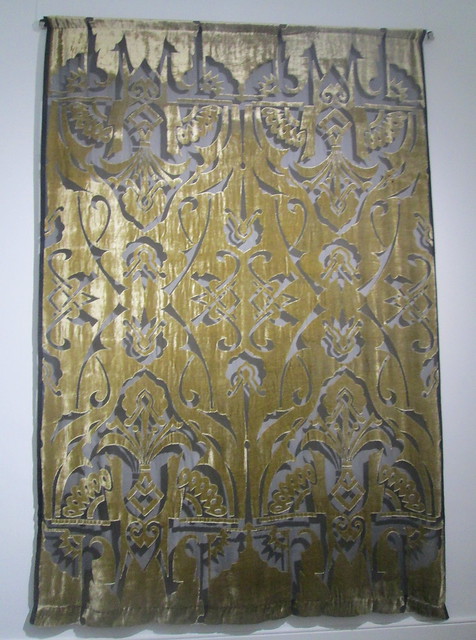 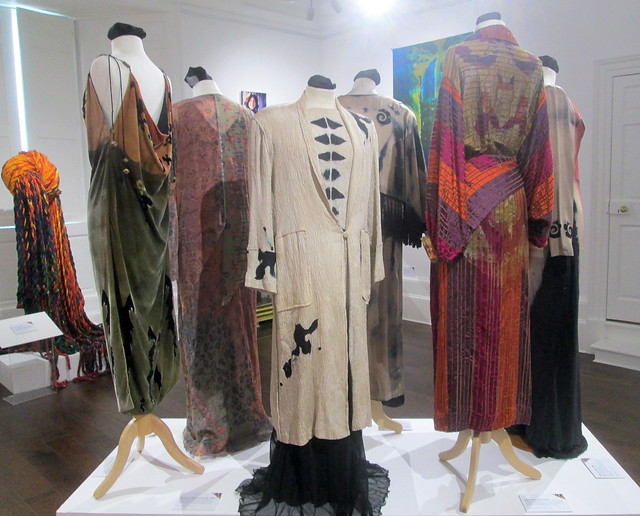 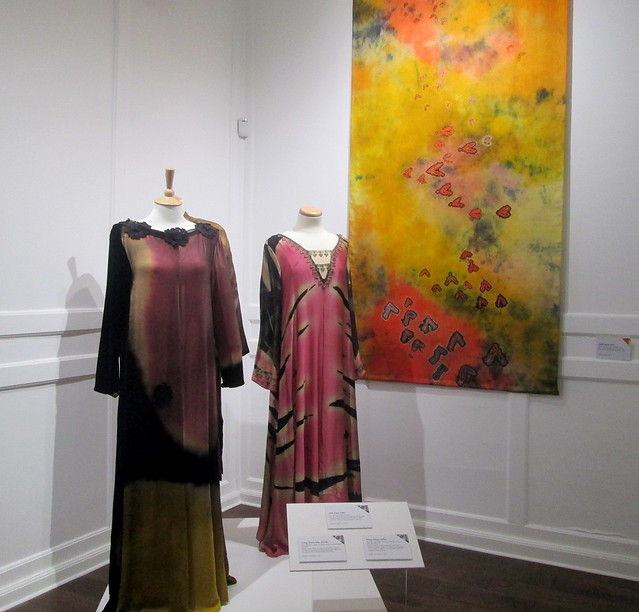 Marian Clayden was born in Preston, Lancashire which had a thriving textile industry back in the day, so her family was involved in various crafts, but I think we can safely say that Marian picked up that baton and ran with it. You can read about her life here. 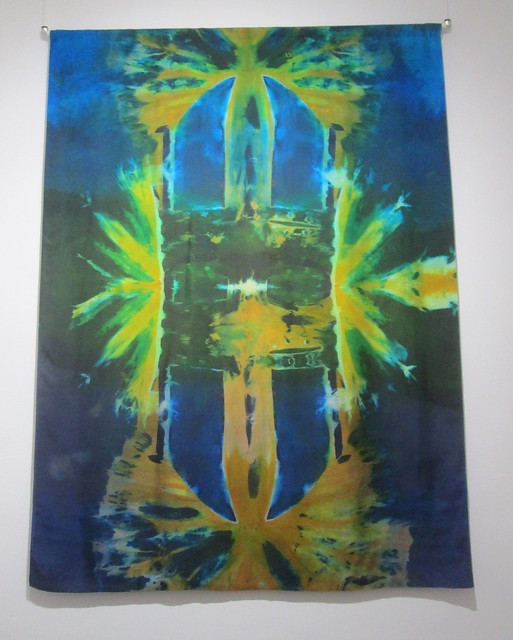 She trained as a teacher but after having a couple of kids and being stuck at home she decided to try dyeing some textiles in her kitchen, using skills she had learned in her teacher training. Moving to San Francisco in 1967 must have influenced her hugely – with all of those flower power people and bright colours around the place. 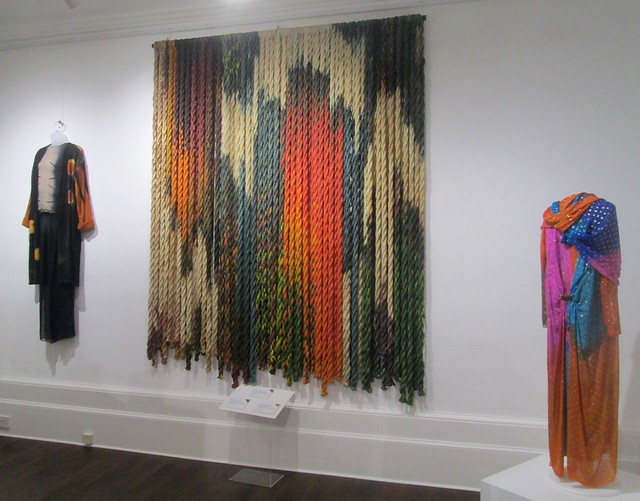 Her career took off and there were exhibitions of her work all over the world. Sadly she died in 2015 but her work lives on in major collections all over the world in places such as the V&A in London and the Metropolitan in New York. We were just incredibly lucky to stumble across this exhibition in a Scottish Castle. 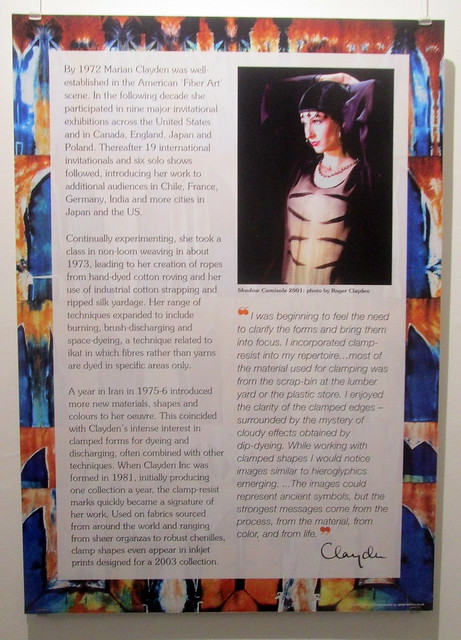 Last night I watched a programme on BBC4 called Glamour’s Golden Age which seems to be part of a new series. If you missed it and you are into 1920-30s design, I recommend that you catch it on the i-player.

I love everything about that era, well – obviously not the T.B., Diphtheria and Rickets sort of stuff, but you know what I mean.

The first building which I can remember seeing and thinking ‘art deco’ was The Midland Hotel in Morecambe. It was about 1969 and as I recall the hotel looked pretty sad and delapidated at that time. However it’s fab now – must have cost a fortune to refurbish it.

I saw the De La Warr Pavilion at Bexhill-on-Sea about 1979. Similar story there and I think it has been refurbished twice since then. That is the down side to art deco (modernist) buildings, if you don’t keep them looking really buffed, they quickly begin to look horrific.

The fashions looked wonderful too but definitely not for the heftier figure.

The posters were fantastic as well.

The 1938 Empire Exhibition was held in Glasgow. It is a city full of fashion conscious artistic people and by the look of things they really pulled out all the stops for it. It’s just a pity that the weather let them down – as usual.

But it didn’t stop the visitors, well after all, we aren’t made of sugar. Unfortunately most of the buildings were just temporary structures, so there isn’t much evidence of the exhibition now. I think it would be great if they would rebuild Tait’s Tower. Tait is more famous for having designed Sydney Harbour Bridge.

However, I think my favourite building would have been The Atlantic Restaurant. Taking tea there must have been a wonderful experience, especially when you consider that most of the visitors would have been living in cramped tenements with outside toilets and gas-lights. It must have seemed like a glimpse of heaven to them.

There are black and white pictures in this You Tube clip.

Angelique Chrisafis of Paris had an article published in The Guardian on Saturday, 30th May, in which she reported on an exhibition at the Jean Moulin Museum. Apparently the exhibition shows how women reacted to the Nazi occupation, using clothing to boost their self-image, amongst other things. It explores the ingenuity of ration book fashion. Of course, much the same things were going on in war time Britain, although admittedly we didn’t have the added problem of the Nazis requisitioning materials such as wool and leather.

We’ve all heard the stories from mums and grannies of gravy browning used to dye legs (very popular with dogs) and beetroot to dye hair. No wonder the Americans were so popular, with their nylons and lipsticks.

Fabienne Falluel seems to think that French women don’t necessarily know how to sew nowadays. However she believes that this will change during this recession, and that people will soon start learning to sew again.

It was a surprise to me that the French seem to be so far behind the times. In Britain, over the past couple of years the sales of sewing machines have increased enormously. I know that young girls here have always customised clothes to make themselves a bit different and add some of their own personality to their style. I know that I have a dread of meeting someone at a ‘do’ who is wearing the same outfit as me, and I’m pretty sure that that is a universal horror for women.

Well, it just can’t happen if you make your own things or at least customise them. The Gok Wan fashion programmes are giving people the confidence to have a go themselves too.

Part of the attraction in sewing is the fact that you can take something that is quite worn out and turn it into something new. It’s all very green and good for the environment, and it saves you money too.
It can be taken too far however. My mother-in-law was a Make-Do and Mend teacher during the war and she carried on with that same attitude to everything for the rest of her life. Like many people of that generation they just got into the habit of saving everything like string, elastic bands and wrapping paper.

Sending the kids to school in patched clothes shouldn’t be an option nowadays as the whole thing gets too Dolly Partonish for words. (See the video below.)

But there surely comes a time for every piece of fabric when the best thing you can do with it is turn it into a cleaning or polishing cloth.

Getting back to the subject of fashion. Just why do the French have such a great reputation for being well dressed? The last time I was in Paris I only saw one well dressed woman the whole time I was there, and she was a lady of a certain age, harking back to that era when no lady would open her front door unless she had her lipstick on, at least.