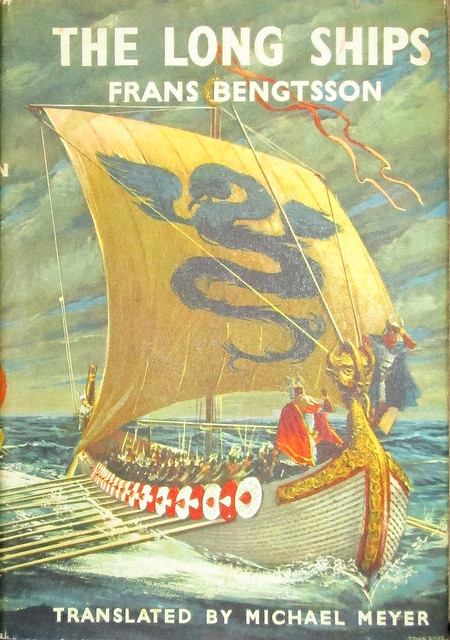 The Long Ships by Frans Bengtsson is a Scandinavian classic and was first published in English in 1954, translated from Swedish to English by Michael Meyer. This is a great read which combines Viking raids in various countries, slavery, conversion to Islam under duress, escapes, fights and battles a-plenty, romance and details of domesticity in the late 10th century. There’s quite a lot of humour too, with the whole idea of men going ‘a-viking’ apparently coming about because the men were tired of listening to their women’s sharp tongues over the long dark winter.

This is a real page-turner with the action beginning in Skania (southern Sweden) where a young man called Orm has been left behind with the women while the men go a-viking. Orm had been rather mollycoddled by his mother after his older brother Are had left home and never come back again, presumed dead. But Orm ends up being abducted from his own doorstep and so begin his adventures which end up with him becoming a leader of men. But it isn’t all about fighting men, there are plenty of good, strong female characters in this book.

This book does seem to be historically correct and it details how Christianity was spread throughout Scandinavia, something which seemed unlikely given that the Vikings were so keen on raiding holy islands and murdering monks and priests.

Frans Bengtsson was a poet and biographer and The Long Ships was his only novel, it’s a great Viking saga.

This year I intend to try to read quite a lot of European books in translation, this one counts towards that personal challenge.