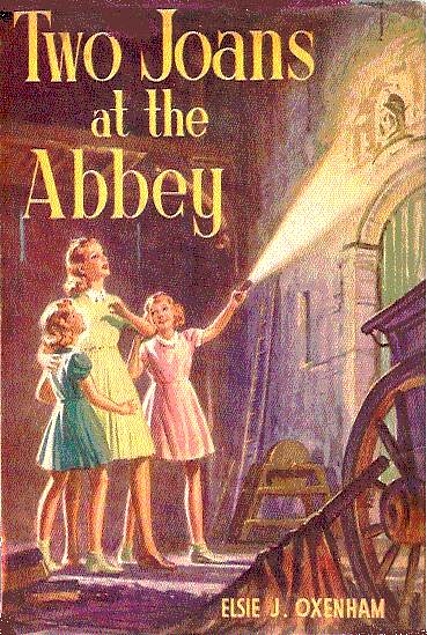 I bought Two Joans at the Abbey by E.J. Oxenham a while ago under the impression that it was a boarding school setting, I enjoy those quaint 1920s- 50s books written by authors such as Angela Brazil and Elinor M. Brent-Dyer. Anyway it turned out that it wasn’t. I was of course attracted to the name Joan! It was first published in 1945.

In no time flat my head was fair jangling with the use of so many names of characters with names beginning with ‘J’. I cannot imagine why the author thought this was a good idea. Joan and Janice were great friends when they were at school, now they have children of their own and they have each given their daughter the name of their best friend. So we have one child Joan who is variously called Joan, Joan-Two, Littlejan then there are Jansy, Jandy Mac, Jen, there’s a John, Jack and even the baby is called Jimmy. Thankfully the cat is called Mrs Black!

Janice and her daughter Joan (or was it the other way about?) are visiting Joan elder and oh well – you know what I mean – at the old abbey where they live. But very quickly Janice gets a telegram telling her that Aunt Mary is seriously ill, so she has to go to visit her in Scotland, leaving Joan-Two behind. The young girls become great friends but are somewhat ‘cheesed off’ that when their mothers were their age they had been able to uncover lost bits of the abbey, there’s nothing left for them to discover it seems.

Of course they do stumble across a ‘new’ old building, but in doing so put themselves in great danger. I ended up liking this quaint adventure story with all its old-fashioned charm, although the author rambles like crazy here, there and everywhere.