At the moment I’m reading Georgette Heyer’s The Grand Sophy and really enjoying it. I’m not quite half-way through it but I really had to laugh when on page 165 I read:

Lord Ombersely, who had gone away after dinner, now reappeared, accompanied by an elderly and immensely corpulent man in whom no one had the least difficulty in recognizing a member of the Royal Family, He was, in fact, the Duke of York, that one of Farmer George’s sons who most nearly resembled him. He had the same protuberant blue eye and beaky nose, the same puffy cheeks and pouting mouth, but he was a much larger man than his father. He appeared to be in imminent danger of bursting out of his tightly stretched pantaloons, he wheezed when he spoke, but he was plainly a genial prince, ready to be pleased, standing on very little ceremony, and chatting affably to anyone who was presented to him. Both Cecilia and Sophy had this honour. His Royal Highness’s appreciation of Cecilia’s beauty was quite as broadly expressed as Mr. Wraxton’s had been, and no one could doubt that had he met her in some less public spot it would not have been many minutes before the ducal arm would have been around her waist. 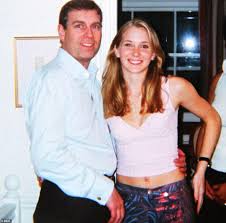 Well – it made me laugh!