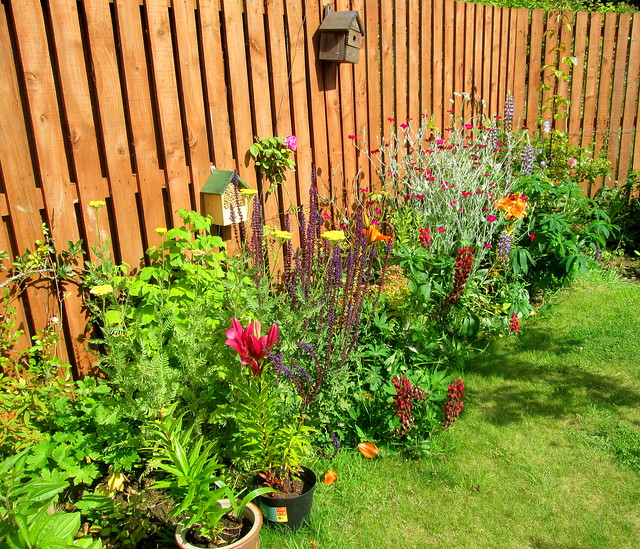 Above is a photo of part of the back border of my garden. When we moved here just 18 months ago there was nothing here except grass, very rough grass at that, but already I’m having to move some plants as they’ve outgrown their space. The lilies in pots are the ones which I grow to put into any bare spots in the border but I didn’t have any gaps to fill. 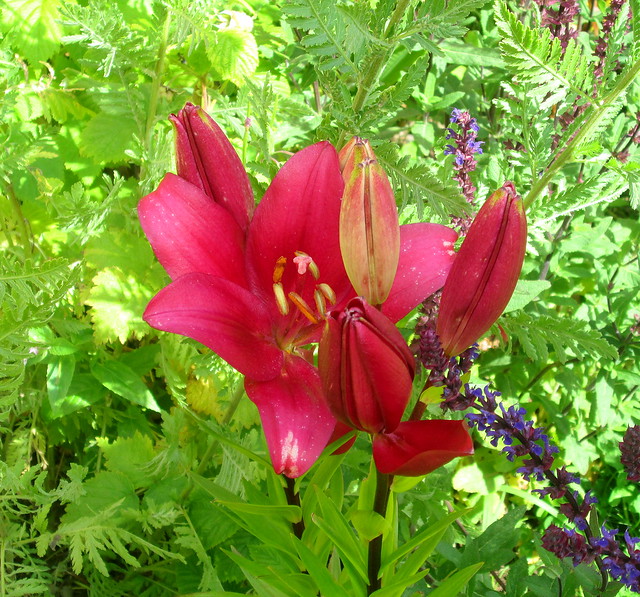 Above is a close up of a lily with a salvia creeping in. I took these photos in July when everything was looking its best but it’s still quite colourful now, considering we’re reaching the back end of September. 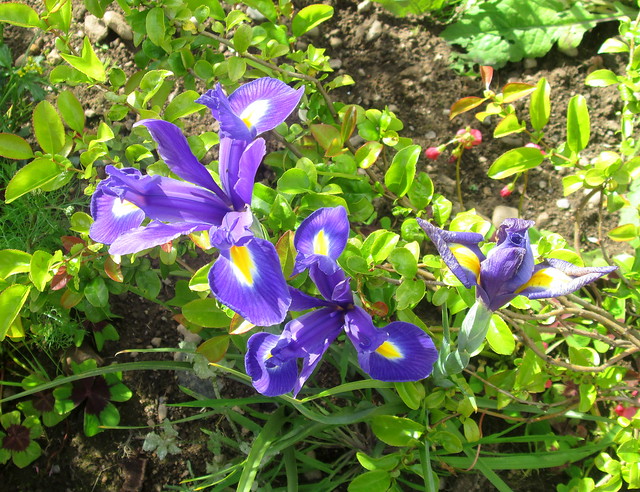 The irises are completely over now so this is a nice reminder of how lovely they were, I must get some more iris bulbs. 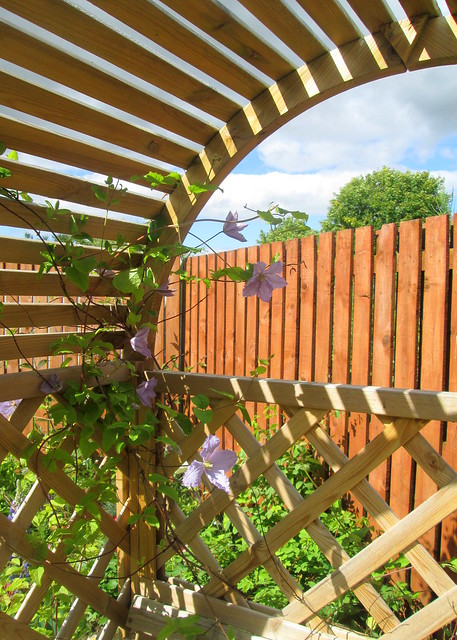 The clematis is beginning to twine around the trellis of the garden seat, it has flowered quite well but the honeysuckle which I planted at the back of the seat hasn’t flowered at all yet – maybe it will next year. 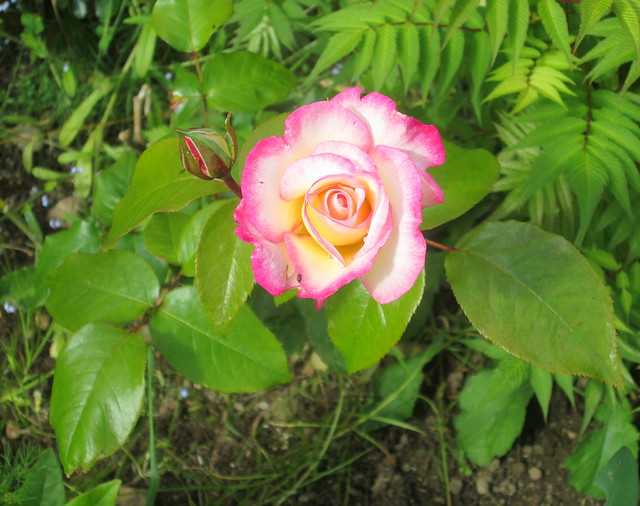 This rose opens up very pale pink tinged with deeper pink as you can see, but as it ages the colour deepens. I really must dig through my plant labels to see what it’s called. 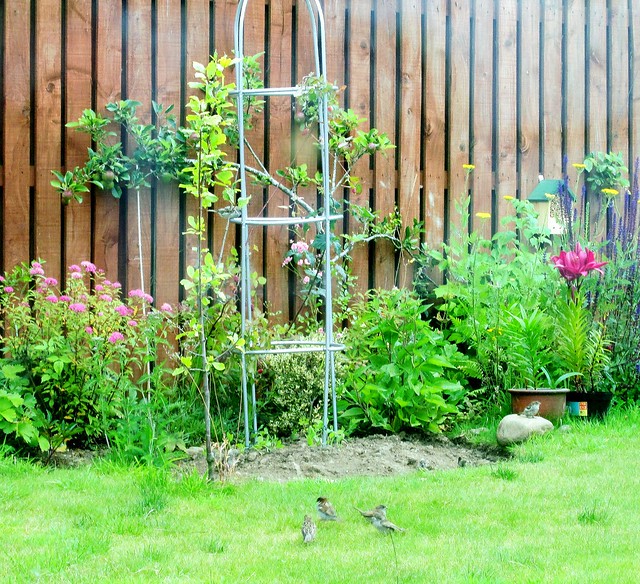 My garden is still very much a work in progress, as every garden is, the obelisk above is one of the more recent additions. I love the way the birds claim everything for themselves as a handy perching place. When we first moved here there were hardly any birds visiting but as soon as I started planting things they came in to have a look and see what was going on. I have sweet peas planted at the base of the obelisk and a Tayberry bush winding around it. 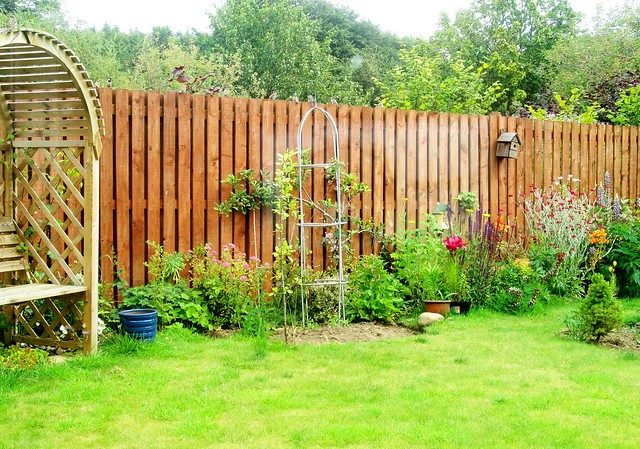 If you look closely at the top of the fence you can see the birds sitting there, looking like they’re waiting in a queue, taking their turn 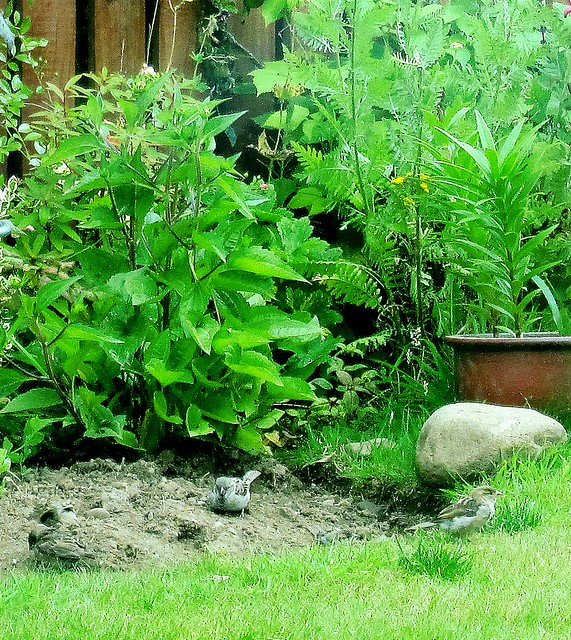 to enjoy a good dust bath. 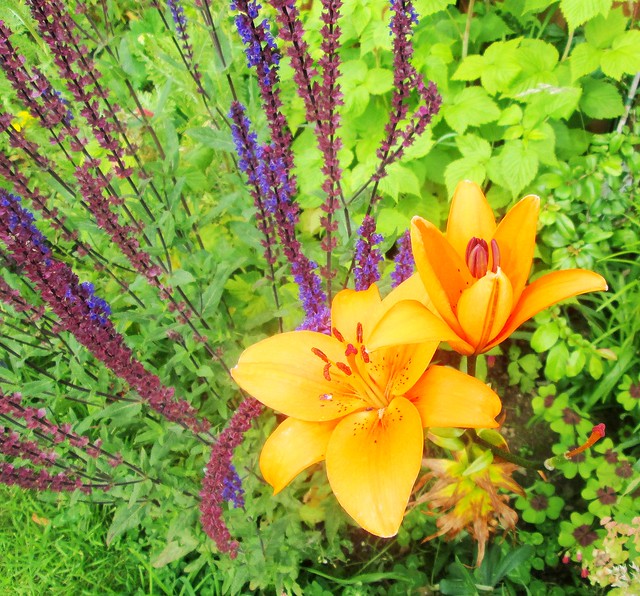 I’m looking forward to the time when the fence is more or less covered by climbing plants and shrubs, the plan is for the garden to sort of blend in with the trees on the other side of the fence, which is a wild area leading to a woodland. 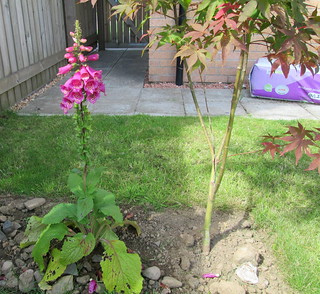 The foxglove above is one of the plants which I bought from the St Andrews Botanic Garden, so it’s a bit posher than the wild bog standard ones, the bees and hoverflies love them all equally though. The acer which you can just see on the right is one which I was given on my birthday which was in June, it seems to be doing well. 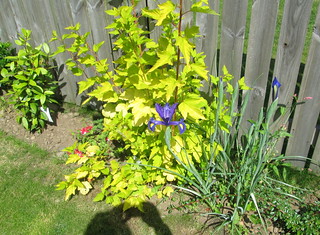 I’m annoyed with myself because I thought I had taken more photos of the irises against the bright yellow/lime green of the physocarpus but if I did take photos I can’t find them, so I only have this solitary bloom, as you see the others weren’t so far forward. They looked great when they were all in flower too. 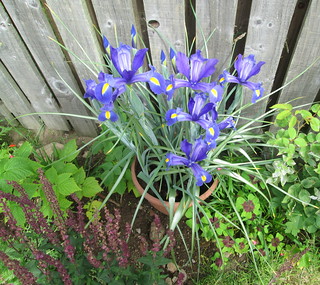 I also put some iris bulbs in a pot and they were useful for filling in spaces in the border. There’s also a salvia in the photo but I can’t remember the name of the wee green leaved plant with purple blotches, it’s another bulb though. 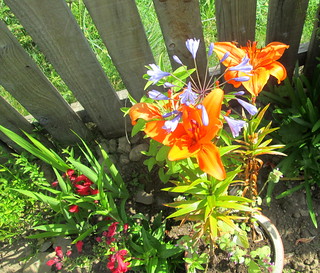 Above are lilies and my one lonely agapanthus flower which I’ve had in a pot for years but I dug it into the ground in the garden, I think that might have been a mistake but I don’t have a greenhouse in this new garden and I’m not going to bother getting one, my old one was handy for over-wintering tender pot plants though. 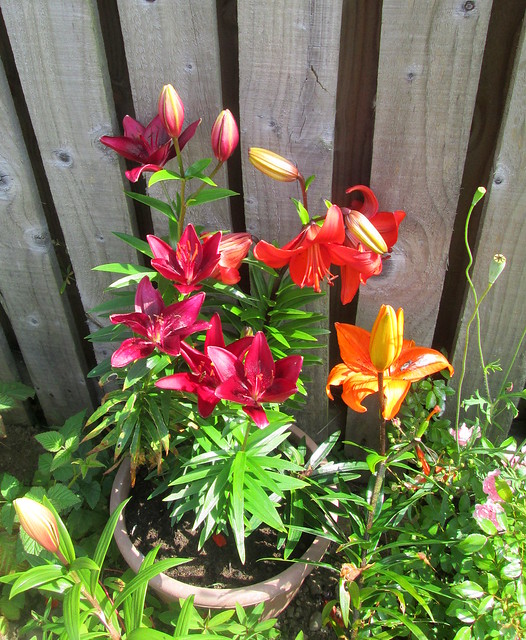 More lilies in a pot. I got about 10 lily bulbs for the princely sum of £1 from one of the many ‘pound’ shops which have sprung up since the financial world went into a spin. They are very good for gardening things. 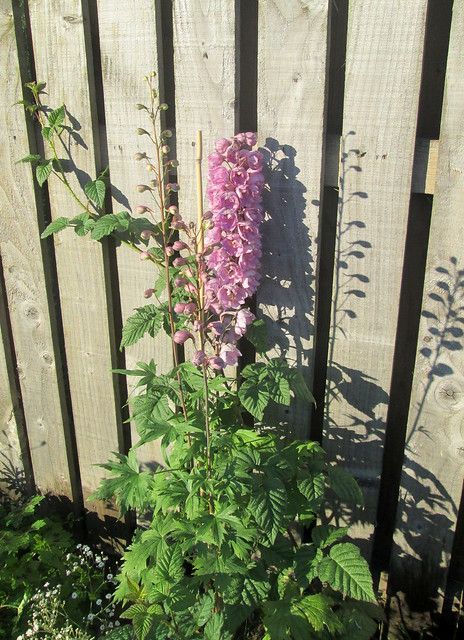 As I said – it was my birthday in June and as usual I told the family that there was nothing that I needed but they bought me various plants for the garden, always the best sort of gift I think – for a gardener anyway. The delphinium above was one of my many birthday plants. The plant which is snaking along the fence to the left is a Tayberry bush, no fruit this year but I live in hope of some next year. 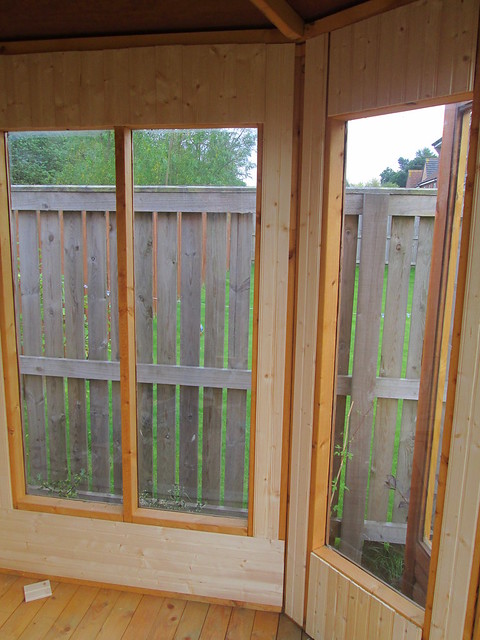 The summerhouse is still a work in progress as you can see, we have to get edging wood to finish it off before getting on to the painting. 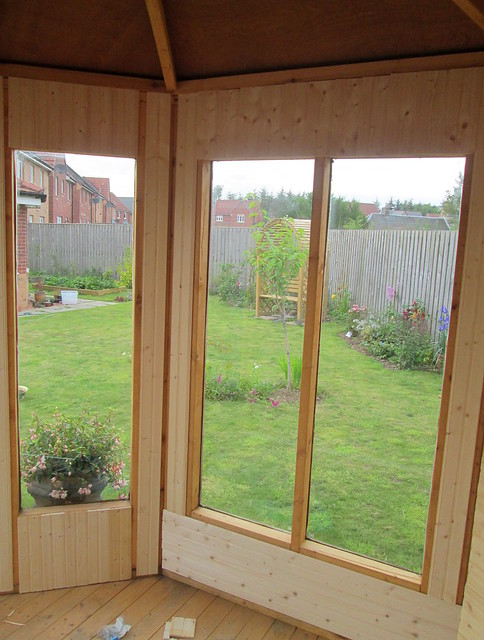 And above is the view of the other side, you get quite a good view of the garden through those windows.

I’ve realised that although I usually concentrate on reading one book at a time, unlike so many folks who have about 5 on the go, to match whichever mood they’re in – I have about 5 house projects on the go, multi tasking maybe but in reality nothing is progressing far with the house and many things are half done. I’m really just not in the mood for doing much beyond gardening and reading. I’ll just plan to finish everything off during the bad winter weather which no doubt will be with us sooner than we would wish. I’m sure I heard the weather forecaster today mention the word ‘autumnal’ – what happened to summer?!

Today I was trying to construct a sort of rockery but it’s a right mess at the moment so no photos of that for a while, it’s hard work too, nobody needs to spend money on a gym membership when they have a garden, that’s for sure.