or The Murder at Road Hill House. 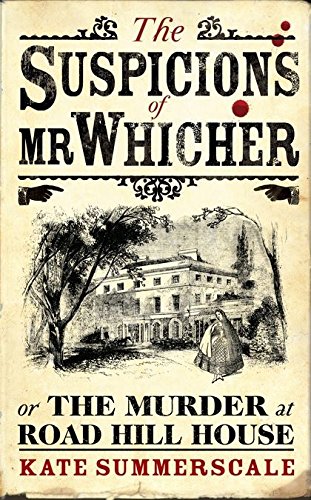 I got a hardback copy of this book as a birthday present but just about every charity shop that I have been in recently has had a paperback copy, so it looks as if everybody has already read it.

Kate Summerscale wrote this book which is based on a true crime which took place in 1860 in a large detached Georgian house in Wiltshire. The family woke up one morning to discover that their small boy was missing from his cot. The house and grounds were searched and eventually his body was found. The grieving family are suspects.

Jack Whicher of Scotland Yard is sent for, he is a famous detective at the time that the profession is in its infancy. The whole country is horrified by the case and Whicher is sent letters from all over the country from people who think they can help him solve it.

The case inspired Wilkie Collins, Dickens, Conan Doyle and Mary Elizabeth Bradden amongst others, but it was years before the true identity of the murderer was known.

Kate Summerscale has interspersed the story with other cases from the era. It is breathtaking how stupid the murderers often were. They seemed to be good at leaving articles of clothing behind at the crime scene, which just happened to have their names sewn into them! Or maybe Mr. Whicher did a lot of ‘fitting up’.

He does seem to have been one of those detectives who decided immediately who the culprit was, because he didn’t like the look of them. I doubt if he was always correct.

Unfortunately there are still detectives around like that today and it takes years for their victims to have their convictions overturned. At least nowadays they aren’t hanged.

I did enjoy this book, although it does skip around a bit between various different cases. If you enjoy a Victorian sensationalist novel now and again, you should like this taste of the real thing.

I was lucky enough to be given a copy of The Gathering Night by Margaret Elphinstone for my birthday. This photograph of me reading it in our garden makes me look a bit weird I think, worryingly my husband thinks I look normal in it.

I was also given The Suspicions of Mr. Whicher by Kate Summerscale which is about a true murder mystery which took place in 1860 and inspired Wilkie Collins and other writers.

Last but not least is a lovely book, Plants in Garden History by Penelope Hobhouse. It’s beautifully illustrated if you like plants, flowers and garden plans.

I can’t resist visiting second-hand bookshops which are quite thin on the ground in this area but when I was in St Andrews I bought myself:

Hungry Hill by Daphne du Maurier as I am trying to read all of hers.

Moonfleet by J.Meade Falkner. It’s a classic tale of mystery and adventure in a Dorset smuggling village. For some reason I love smuggling tales.

The Best of Saki (Hector Hugh Munro) who was killed in the trenches in the First World War. It’s a book of short stories.

Last but not least School for Love by Olivia Manning. I’ve been meaning to read more of her books. I read and loved The Balkan Trilogy and The Levant Trilogy. The BBC serialised The Balkan Trilogy as The Fortunes of War in 1987 starring Emma Thompson and Kenneth Branagh. I think anyone interested in WW2 would love these books.

I was given lots of DVDs by Duncan and I was especially pleased to get The Shipping News. I read the book recently and was so immersed in it that I really missed it when it was finished, so now I can revisit the story via the film. It’s too soon for a re-read.

So, as you can see I was a very lucky birthday girl and that TBR pile just keeps growing.