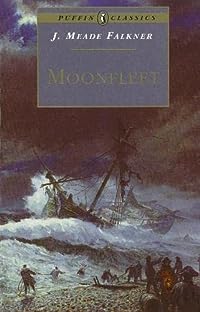 A classic tale of mystery and high adventure in a Dorset smuggling village.

Well that’s what it says on the back of the book and I wouldn’t argue with the description. I enjoyed this book, but I must admit that I’m drawn to smuggling tales anyway. Probably because I like the thought of the poor down-trodden souls getting one over the tax-man at a time when they were being taxed even more than we are now.

John Trenchard is 15 years old at the beginning of the book and he is living with his aunt in the village of Moonfleet, which is just half-a -mile from the sea. Both his parents are dead and his aunt has obviously taken him in as an obligation which she would rather not have.

The village has always been full of spooky tales of the ghost of Blackbeard, who haunts the churchyard looking for his treasure – a huge and perfect flawless diamond, which of course is said to be cursed.

When John discovers a secret passageway leading under the church he thinks he will find the diamond there but ends up being embroiled with a smuggling gang.

First published in 1898, Moonfleet is a classic adventure tale, suitable for young and old.

Moonfleet was made into a film in 1955, starring Stewart Granger and that lovely wee Scottish child actor John Whitely.

I was lucky enough to be given a copy of The Gathering Night by Margaret Elphinstone for my birthday. This photograph of me reading it in our garden makes me look a bit weird I think, worryingly my husband thinks I look normal in it.

I was also given The Suspicions of Mr. Whicher by Kate Summerscale which is about a true murder mystery which took place in 1860 and inspired Wilkie Collins and other writers.

Last but not least is a lovely book, Plants in Garden History by Penelope Hobhouse. It’s beautifully illustrated if you like plants, flowers and garden plans.

I can’t resist visiting second-hand bookshops which are quite thin on the ground in this area but when I was in St Andrews I bought myself:

Hungry Hill by Daphne du Maurier as I am trying to read all of hers.

Moonfleet by J.Meade Falkner. It’s a classic tale of mystery and adventure in a Dorset smuggling village. For some reason I love smuggling tales.

The Best of Saki (Hector Hugh Munro) who was killed in the trenches in the First World War. It’s a book of short stories.

Last but not least School for Love by Olivia Manning. I’ve been meaning to read more of her books. I read and loved The Balkan Trilogy and The Levant Trilogy. The BBC serialised The Balkan Trilogy as The Fortunes of War in 1987 starring Emma Thompson and Kenneth Branagh. I think anyone interested in WW2 would love these books.

I was given lots of DVDs by Duncan and I was especially pleased to get The Shipping News. I read the book recently and was so immersed in it that I really missed it when it was finished, so now I can revisit the story via the film. It’s too soon for a re-read.

So, as you can see I was a very lucky birthday girl and that TBR pile just keeps growing.