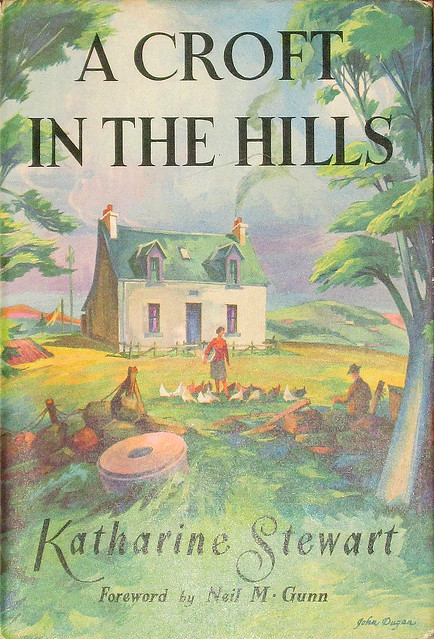 A Croft in the Hills by Katharine Stewart was first published in 1960. I said in an earlier post that it was the book cover which enticed me to buy the book. It thought it was such a twee but idyllic scene. In fact it’s only now that I realise that the house looks almost exactly like our old house in Kirkcaldy, except that one had one bay window. But our old place is situated on a busy town street and the croft in this book is 1,000 feet above Loch Ness, a very remote hillside, where farming and cattle rearing is only ever going to be a struggle against the elements.

Katharine and her husband had been living down south with their young daughter, but life was less than happy, with her husband having to do a long commute to his work every day. They felt that their quality of life was low and hankered after the hills of Scotland and a simpler way of life. Eventually they got their dream croft and so they began the difficult task of getting it habitable and trying to make a go of it. Things started off well, mainly because during their first year there they were fairly lucky with the weather, but after that each subsequent year got harder instead of easier, and despite having lots of help from neighbours they still had to give up their dream bit by bit.

The author had the bright idea of writing some tales of their crofting experience and sent them off to a newspaper, she was lucky enough to get them accepted by an Edinburgh newspaper who gave her a weekly column. Eventually she got taken up by the BBC, but even that extra money didn’t stop them from having to give up the crofting. Obviously they had fallen in love with the Abriachan/Inverness area and the author became a teacher in the nearby primary school.

Whilst reading this I couldn’t help thinking that their surrounding neighbours must have thought to themselves that they would have to help this couple out because otherwise they weren’t going to survive the crofting experience. When they moved to the croft they had a three year old daughter, but no more children appeared and I doubt if the author would have managed the harsh life if she had had to wash nappies in a burn and carry on with the heavy work whilst pregnant. But this book is an important window into what was a fast disappearing way of life and to the sort of people that crofters were. More books followed this one and they are still being reprinted. In case you don’t know – a croft is a smallholding. It has always been just about impossible to croft full time, most people have had to take on a part time job to make ends meet.

Katharine Stewart was born and brought up in England but her husband was from Scottish crofting stock. Katharine had a long life, only dying in 2013 at the age of 98 and she packed plenty into her time here. You can read her Scotsman obituary here.

We were in Edinburgh showing a bookish friend our favourite book haunts in Stockbridge. Honestly I had absolutely no intention of looking at books myself, but you know what it’s like, a book spine captures you attention – and you’re doomed. So I bought this lot: 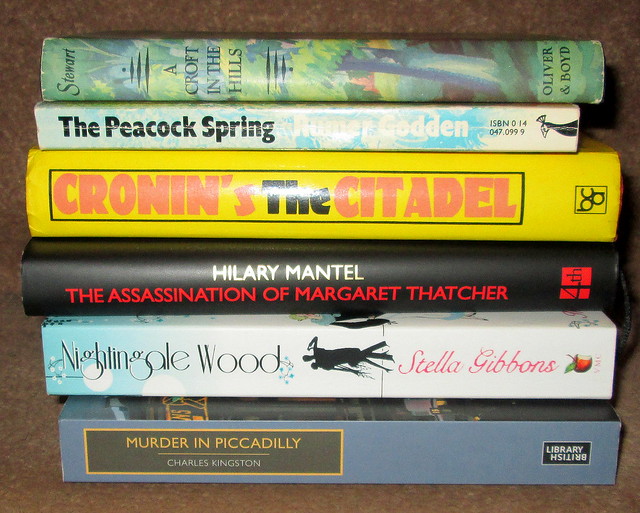 1. A Croft in the Hills by Katharine Stewart. I bought this purely because of the unbelievably twee cover which is in very good condition, despite the book having been published in 1960.

2. The Peacock Spring by Rumer Godden. I read a lot of her books way back in the year dot when I worked in libraries, I now can’t remember which ones I’ve read for sure. I looked at this one and thought I haven’t read it, or certainly have no memory of it. I wish I had kept note of all the books I had read in the past.

3. The Citadel by A.J. Cronin. I was sure that I had this book already but I haven’t been able to find it so I must have given it away. Anyway, I’m not sure if I’ve even read it before as it’s only his Hatter’s Castle which sticks in my mind from way back. If anyone wants to join me in a readalong of The Citadel – let me know.

4. The Assassination of Margaret Thatcher by Hilary Mantel. I’ve read the title story from this collection and I’m looking forward to reading the rest in this collection of short stories.

5. Nightingale Wood by Stella Gibbons. I’ve read her Cold Comfort books and loved them. The Matchmaker was okay, this one is a Virago publication so I have high hopes of it.

6. Murder in Piccadilly by Charles Kingston (1884-1944). This is another of those British Library Crime Classics. Kingston apparently wrote twenty crime novels but he’s new to me.

Have you read any of these book? If so, what did you think of them?