It was a sparkling afternoon in October I think when we visted Dunkeld again, just for a walk around the place. Perthshire is well known for having lovely trees. 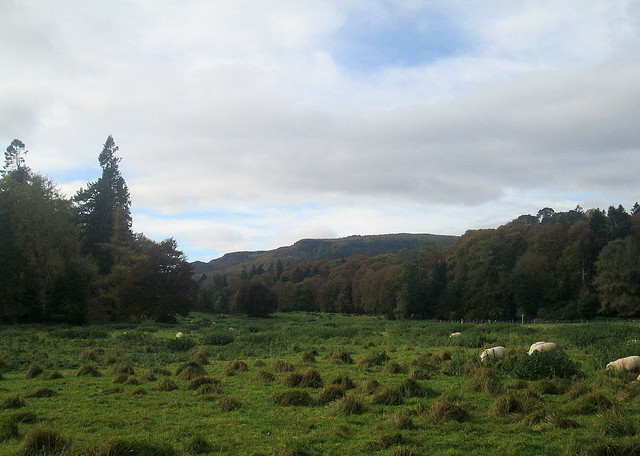 Walking around the edge of the cathedral brought us to these sheep that are in the normal sheep stance – head down and chomping away. 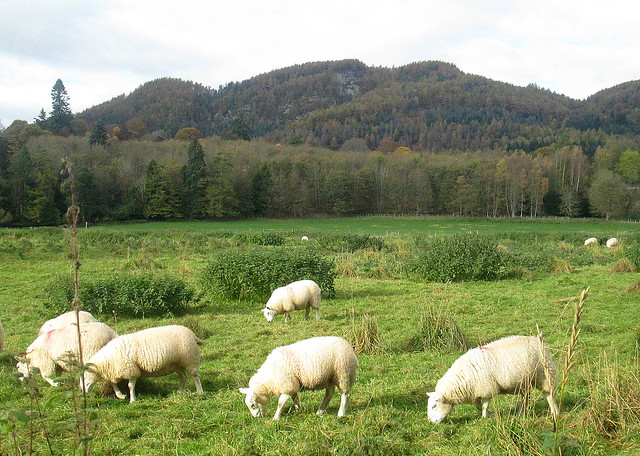 The banks of the River Tay are very close to the remains of the cathedral, so the grass there is manicured compared to the rest of the riverside. It’s a nice place to sit and is just a hop and a skip from the wee town. 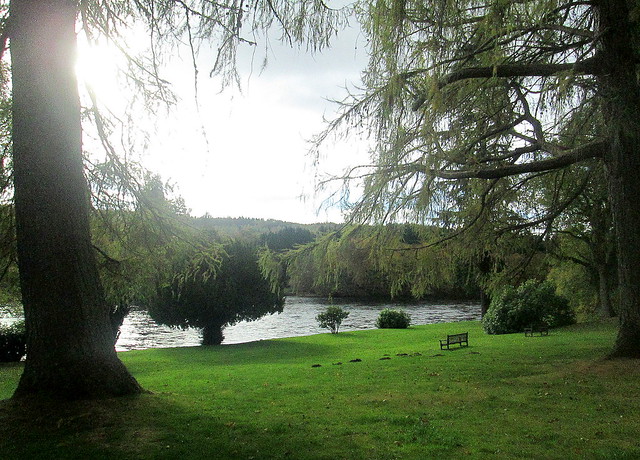 The Tay is really a thing of beauty, swift, clean and somehow honest looking, certainly when I compare it with my recent visit to the River Severn. Don’t fall in though! One of our ‘boys’ once kicked our football into it when he was a youngster, I think he thought we would be able to get it back – no chance. 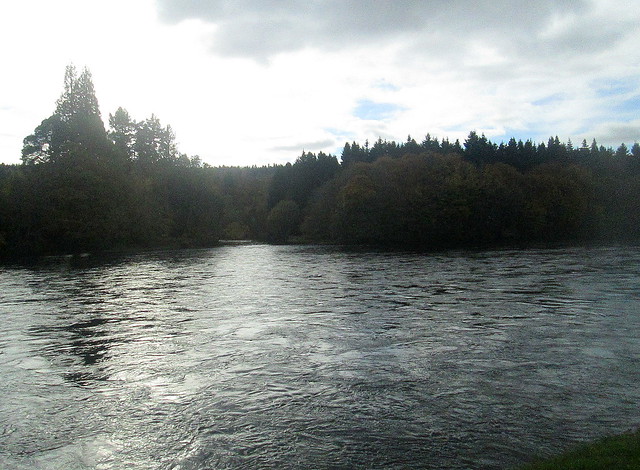 Sometimes they have the salmon season opening ceremony at Dunkeld, they pour some whisky into a quaich which is a two handled Scottish drinking vessel and throw it into the river as a blessing. Nowadays if you catch a salmon you have to put it back in the river, after taking photos of it of course. Conservation is important.

One year I remember they had to crack the ice to get a boat onto the river, but I can’t find any videos of that freezing year. I did find one of the 2018 ceremony at Kenmore though, another wee place I’m fond of and I’ve added it to an old Kenmore blogpost of mine. So if you enjoy listening to a pipeband and you’re interested in seeing a River Tay fishing season opening ceremony have a look here.

It was our 41st (yes that’s not a typo, but I don’t know how that happened!) wedding anniversary earlier in the month and we decided to celebrate by driving 50 miles north to the wee village of Kenmore. Previously we had just briefly looked at Kenmore as we drove through it on the way back from a holiday in the Highlands. 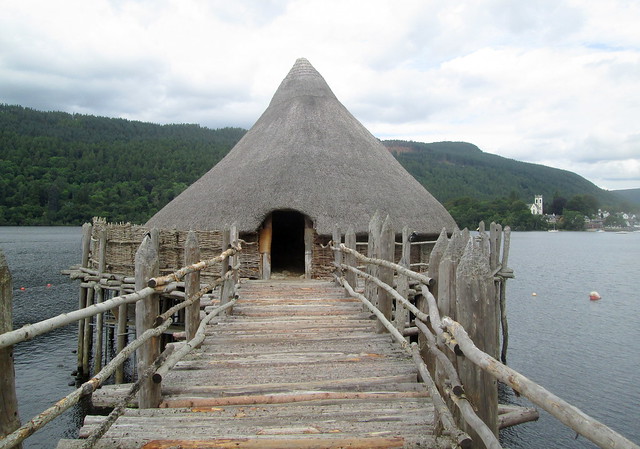 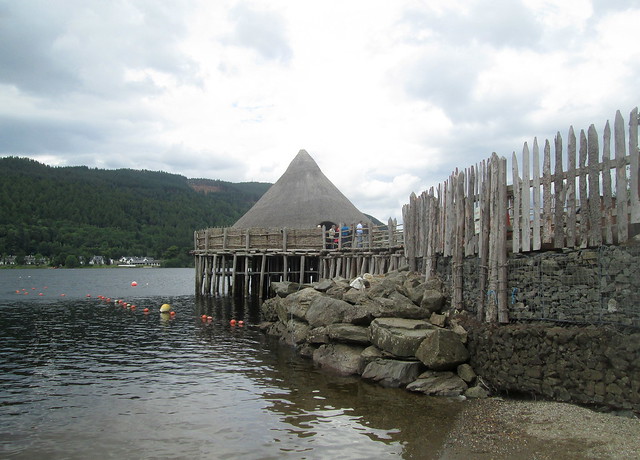 It’s such a scenic area, the River Tay runs out of Loch Tay here. We intended to visit the reconstructed crannog in the loch, but didn’t think that would take very long. As it turned out we were there for getting on for two hours and I highly recommend visiting The Scottish Crannog Centre. Rachael gave a very interesting talk and is an archaeologist so she should know what she’s talking about.

Crannogs were living quarters that were built by the inhabitants of Scotland 2,500 years ago. They were built on tree trunk stilts above the loch with a split log walkway leading out to the crannog. It’s like a very heavy duty yurt I suppose and is really very comfy and cosy inside. They would have had a fire in the middle of the structure so it would have been a bit smoky and their sheep were also in a fenced off area within it so it was probably a bit smelly, but on the upside – the midges apparently don’t bother you there. 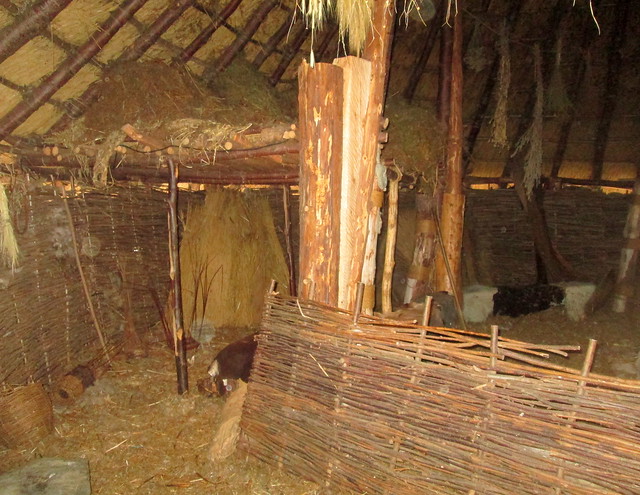 We were told exactly how they went about building crannogs, cutting trees with bronze axes and forming a point at one end to help get it positioned in the bottom of the loch. When the log stilts were driven in in a circle they then made a platform floor making one large circular room and then sectioned parts of that off. 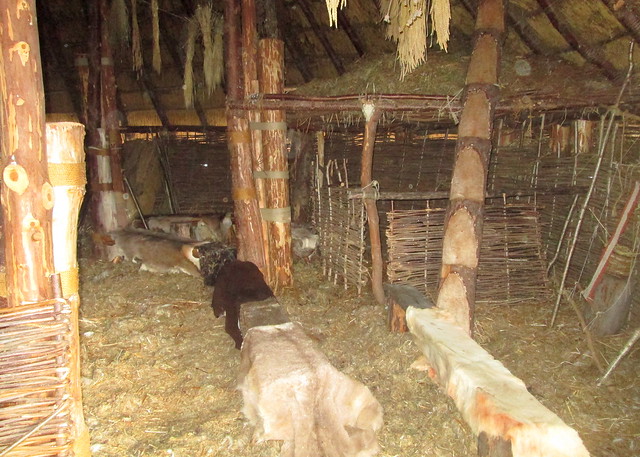 One extended family would have lived there, possibly as many as 15 people (and the sheep). Nowadays the only permanent inhabitants were two families of swallows who dived in and out as our guide talked to us. 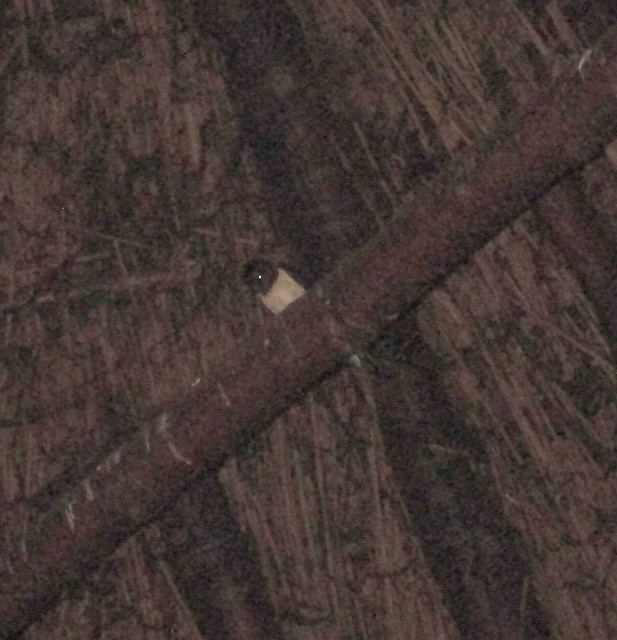 The museum part of the centre has lots of artefacts that were found when some of the eighteen known crannogs that were on the loch were excavated. Tools and pottery, jewellery, wooden bowls and even some tweedy fabric has survived. The crannog dwellers could refurbish their homes for years, replacing rotten wood with new logs, but eventually there came a time when there was no space to put new supports and then the whole thing would collapse into the loch, which eventually became a small island as trees and plants germinated there. In fact you can see two small crannog islands from the reconstructed one. One had a abbey built on it in the 11th century. It’s situated just behind those boats and blends into the trees on surrounding hills, but it is an island. 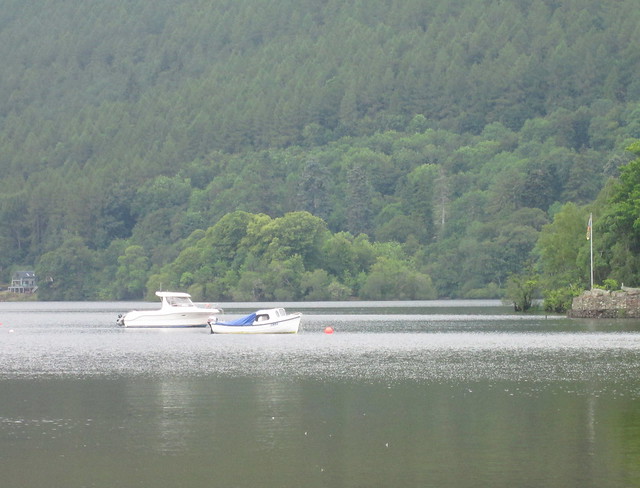 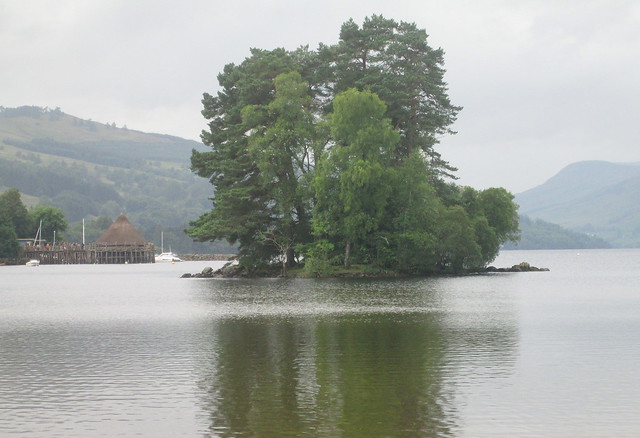 They’ve also hollowed out some trees to make authentic log boats like the ones that were used by the crannog dwellers. 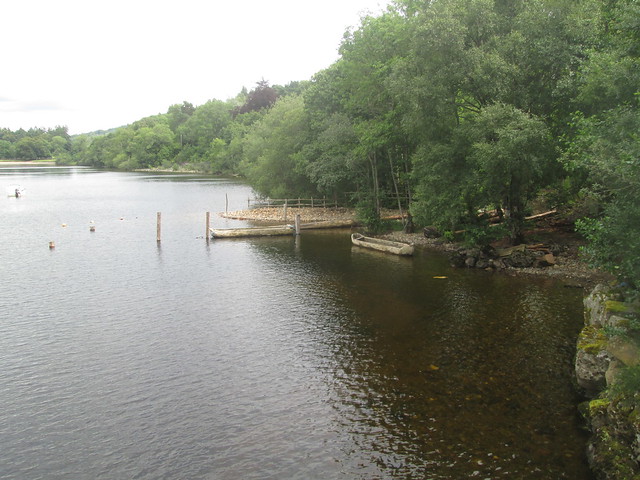 After the talk in the crannog we walked back onto land and were given demonstrations on fire-making, wood-turning and spinning. I had a wee shot at the spinning, I think I could get into making and dyeing my own wool!

After that we had a tasty dinner at the Kenmore Hotel which is apparently the oldest inn in Scotland. Sadly by then what had been a beautiful blue sky day had turned into a grey damp one, but that didn’t stop us from walking along the beach below and then driving on to a few more villages in that area before going home. 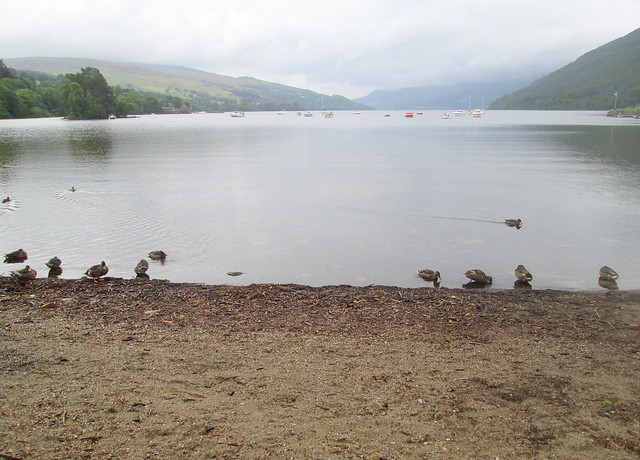 That was a great way to celebrate our wedding anniversary.

On our way back from the Highlands recently we passed through the teeny wee village of Kenmore, I say passed through but when I saw how pretty it was we had to stop. I had no idea that this place even existed and it’s really quite close to where we live, well 60 miles or so from us. Just above the Post Office sign to the right it says Telegraph Office, I’ve never seen that before and I’m glad that it has been left there as it’s part of the building’s history.

The Kenmore Hotel claims to be the oldest hotel in Scotland. I think we’ll have to go and give it a go sometime. 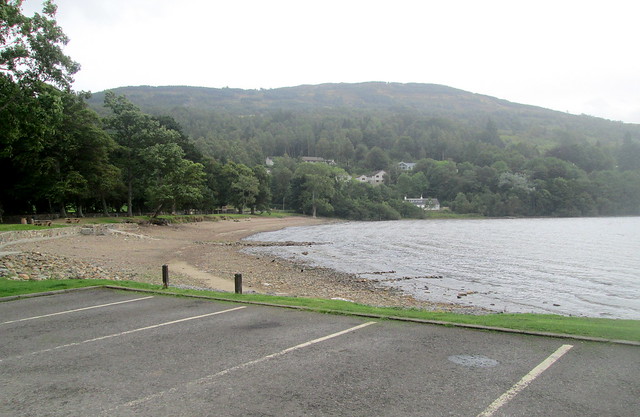 A one minute walk from the Post Office takes you to the banks of Loch Tay as you can see. Kenmore has a really beautiful setting and is very historic, people have lived in that area for thousands of years and a crannog has been reconstructed on the loch, as they would have been there originally in the Bronze Age. 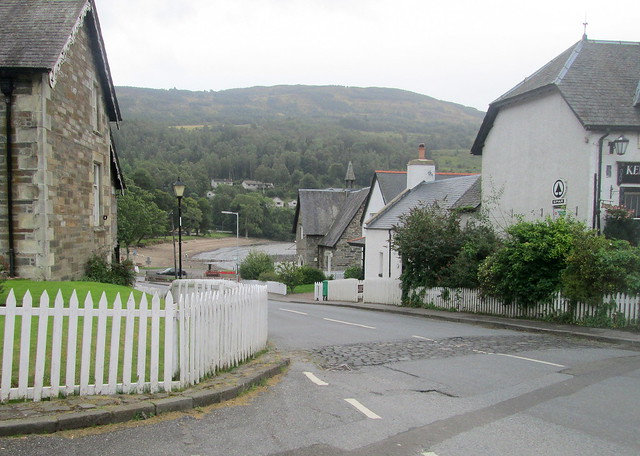 It was beginning to get quite chilly and misty when we were there and we were keen to get home after our Highland jaunt but we’ll be going back there to explore it more thoroughly in the future.

I’ve wanted to visit a crannog for years so I’ll definitely be going to explore the one below, maybe in the springtime.

If you’re interested in seeing some more of Kenmore and you enjoy a pipe band, have a look at the You Tube video below. It shows the 2018 River Tay salmon fishing opening ceremony.