The Sleeping Army by Francesca Simon was first published in 2011 by Faber and Faber. The setting is London’s British Museum to begin with, but it isn’t in a Britain as we know it because Christianity has never taken over from the Norse religion, Thor, Woden et al are still worshiped. It’s a Wodenist culture.

Freya is a twelve year old girl whose parents have split up and have joint custody of her, she’s having a tough time coping with living in two different locations – and with her father’s work patterns. He has a new job as a guard at the British Museum and Freya is having to stay at the museum during his shift. While wandering about on her own she’s drawn to the display of the Lewis Chessmen, most of which were taken to London despite being discovered on the Isle of Lewis. The room houses treasures from a Viking silver hoard, and when Freya fiddles with one of the exhibits she’s catapulted into an adventure which features the Norse gods and the chess pieces which have come to life.

Oh, Mum, if you could see me now, thought Freya, as she stepped off the trembling rainbow into the realm of the Gods.

This was an enjoyable adventure, written by the author of the very popular Horrid Henry series (which I’ve never read). The book has some lovely illustrations by Adam Stower, some of which you can see here.

You can see images of the Lewis Chessmen here.

I love the Berserker, he’s the one chewing on his shield, he just makes me laugh! 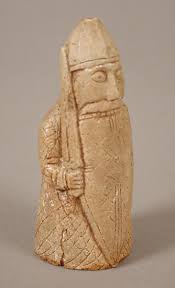