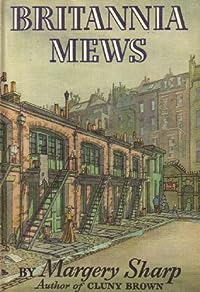 Britannia Mews by Margery Sharp was first published in 1946 and it wasn’t at all what I was expecting. I had imagined it was going to be about a neighbourhood during World War 2 – a setting that is usually right up my street so I was quite disappointed when I realised that the story opens in the 19th century.

At the beginning Britannia Mews is quite a good address, this book marks its decline to slum status and its subsequent gentrification years later. Mainly it’s about Adelaide who is only ten at the beginning of the book, she’s very close to her cousin Alice, they share drawing lessons together, but when Adelaide’s hormones turn up she becomes obsessed with the drawing master and elopes with him. Adelaide’s family had already left Britannia Mews for a better address but when they were in the midst of moving again, this time out of London, she takes her chance to run off and ends up back in the now slum area of Britannia Mews. She has worked everything out, getting a special marriage licence so that when her parents track her down it’s too late for them to do anything about it.

Adelaide like many a woman before her thinks that she will be able to transform her husband, starting with scrubbing their rooms, but it’s not long before she realises she’s made a terrible mistake, but she’s never going to admit that to her over-bearing mother, she’ll stick it out come what may, despite having to live amongst filthy people the likes of which she’s never met before.

I enjoyed the second half of this book more than the first and I have to mention that for a filthy slum Britannia Mews was remarkably lacking in vermin. In reality someone like Adelaide would have moved out at the first glimpse of cockroaches, bedbugs and rats. But that’s me being pernickety I suppose.

For some reason I never gave any thought to the book buying possibilities in Orkney, but as we were driving around Kirkwall looking for a place to park I spotted a sign saying those wonderful words – Secondhand Books. Luckily after visiting the town centre, Saint Magnus Cathedral and two Historic Scotland properties we were able to walk back to the car and find the bookshop not too far away. So my haul was. 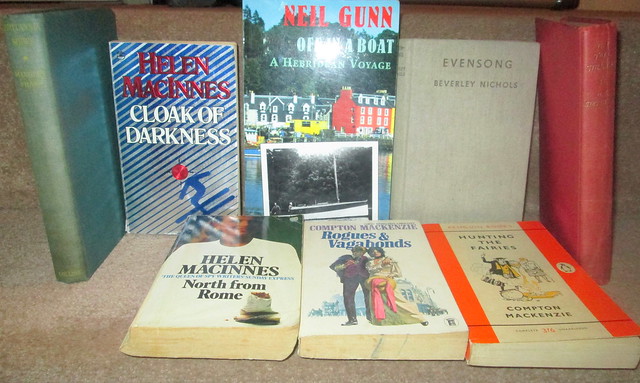 Six of them are by Scottish authors so they’ll come in handy for the Reading Scotland 2017 Challenge.

Have you read any of these?