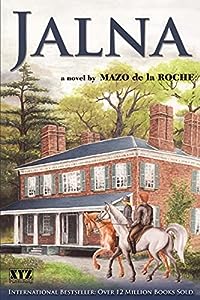 I don’t know what it was that got me thinking about this author and her Jalna series recently, as I mentioned before they were in the public library which I used to work in but even then (1970s) they were regarded as ‘old hat’. I have to admit that I’m a bit snooty when it comes to some books, well quite a lot of books actually, and I think I looked down my nose at poor old Mazo de la Roche because there were so many of the books, it looked like they’d just been churned out.

Anyway, I haven’t seen anyone else mentioning this author so I thought I would give her a go as part of the C P R Book Group. It was first published in 1927 and Jalna is the first in the Whiteoak series, it was an instant best seller. The American magazine Atlantic Monthly awarded Mazo $10,000 for Jalna, a huge amount of money in 1927. The first of any sort of series must be the awkward one because it’s necessary for the writer to do a lot of scene setting and and basically info dumping so there’s always going to be a certain amount of clunkiness in that process, but I still found Jalna to be an interesting and entertaining read.

It’s set in Canada where Adeline and Captain Philip Whiteoak have moved to after their marriage in Bombay where Philip had been in the British Army. At the beginning of the book Adeline is 99, her husband is long dead as are the mothers of her grandchildren and they are all living together along with Adeline’s two surviving sons on the family estate which is called Jalna. Gran Adeline is a domineering but amusing character. Her pet parrot, which of course perches on her shoulder, also swears fluently in Hindi, which I wish I knew!

It’s a lot to keep straight to begin with, there are so many male characters but as with all good family sagas there’s a family tree at the beginning. My heart did sink a wee bit at first because chapter 1 is all about the 8 year old Wakefield Whiteoak who is supposed to be a loveable rogue I think. In reality I would never have tired of giving him a good skelp – how un-PC of me! But the story soon moves on to all the other family members and their lives.

Well I found myself caught up by all the various characters and I’m happy that I managed to buy the second book in the series the other day. I got the first one from my local library.

It isn’t what you would call high brow literature, more of a comfort read really and that’s exactly the job that this series did, especially during the time of World War II when real families were scattered all over the world by the conflict. There are 16 books in the series and I think I’ll work my way through them all eventually.

This is a book which I read as part of the C P R Book Group Ceilidh and although I enjoyed it I’m giving it a tentative HEE-YOOCH (remember this is just a bit of fun, nobody else has to hee-yooch or black spot!) which would probably translate to about 4 out of 5.

I think a lot of us have been casting our minds back recently, trying to remember authors whom we’ve enjoyed in the past, I know I have been anyway and other bloggers and commentators have weighed in with their suggestions too. So my author list is ever lengthening in fact it’s just growing and growing like Topsy!

I’m hoping to read more Mary Stewarts soon, in fact I bought a hardback copy of The Wicked Day for pennies from Amazon so I’m looking forward to reading that. And I’m looking for more by Angela Thirkell and D.E. Stevenson. Niranjana (Brown Paper) has just reminded me of Elizabeth Jane Howard.

But what I really want to know is: Has anybody read anything by Mazo de la Roche? She wrote a lot of books and in the first library that I worked in there was a shelf full of them, but that was in the 1970s and they were regarded as being old-fashioned then. As I recall the shelf was just one big mass of pink covers which never moved. I have an urge to try them out now, the Jalna series anyway but I’m wondering if they are worth reading. Her name sounds very exotic but she seems to have been a Canadian writer.

I have a vague feeling that I have read at least one book by Audrey Erskine Lindop but so long ago that I can’t remember for sure. Has anyone read anything by her? If so, would you recommend giving her a go?

It would seem that a lot of readers have been quietly ‘doing their bit’ to save neglected books. If you haven’t already read her post have a look at what Danielle at A Work in Progress has written about it.

I know that libraries have to make space for new books but it means that books are sold off or they languish in the Reserve Stock where ordinary readers can’t browse. I love the idea of readers going around borrowing books in the hope of saving them for another generation of readers.

If we were doing it for anything else other than books we would be a pressure group and have a proper name. I’ve been amusing myself thinking of what we could be called. From an Edinburgh point of view we would have to be The Book Resurrectionists. Or is it more akin to defibrillating – Book Paramedics or The CPR Book Group.

Anyway if you pick up a book in your library and it’s a good long while since it has been borrowed, make it happy and give it a go. After all it was once somebody’s ‘baby’!!