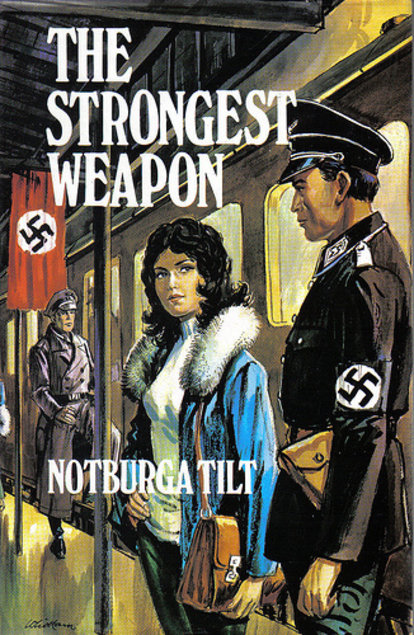 The Strongest Weapon by Notburga Tilt was published in 1972, by a small firm of publishers in Devon. Possibly it was a book which the writer paid to have published as I honestly can’t see any publisher stumping up money to the author.

Notburga Tilt was an Austrian who lived there at the time of Hitler’s Third Reich and this book is supposedly about the author’s experiences as a member of the Austrian resistance. It was apparently her job to get information from German soldiers – using her wonderful beauty and sex appeal to vamp them.

In fact in every chapter the author harps on about her good looks and she is constantly being proposed marriage by German officers whom she has only just met! One of them she actually did marry – AND he was in the SS.

The book isn’t at all well written but I feel I can’t be too picky about that as she obviously wasn’t writing in her first language. However I believe that one of the most important things about being in any resistance group is to keep quiet about it. One of the first things Burgi told some of the German soldiers who were swooning over her was that she was in the resistance!! – with no consequences.

There’s also precious little about what she was actually doing apart from seducing Nazis and travelling about. She does however mention losing her watch and a few sentences later she’s checking her watch! However, after searching the internet I was surprised to see that she actually appeared on TV’s This is Your Life and seems to have been a bit of a celebrity at one point, locally anyway.

I struggled to the end, just because I was so incredulous really. It reminded me of when my oldest brother first moved to Holland in the early 1970s. He said that everybody of a certain age claimed to be in the Dutch resistance. In reality though people had to be so brave to do such work that they must have been very much in the minority. However I can imagine that post-war some people did feel the need to dream up an alternative history for themselves. The author of this book seems to have been one of them, but it was the narcissistic aspect of her personality that I found most embarrassing, especially as the photo of her at the front of the book is of a woman who is as plain as a scone – as we say in Scotland. 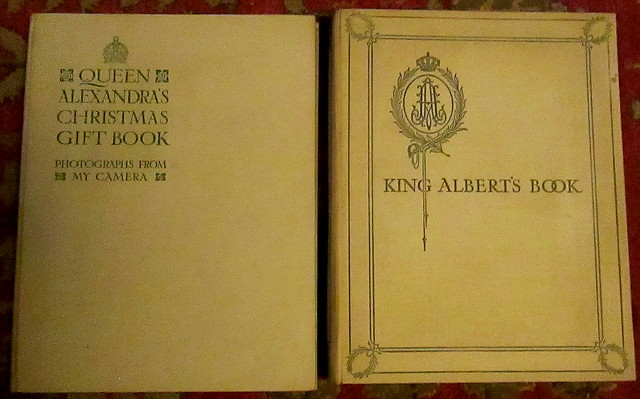 I’ve often seen copies of King Albert’s Book but as they’re over 100 years old they’re quite often in bad shape with torn pages, missing illustrations (they’re sort of tipped in) or drawn on. The book was sold in aid of the Belgian refugees at the beginning of World War 1 and published by The Daily Telegraph in conjunction with The Daily Sketch and The Glasgow Herald so there are quite a lot of them about. Basically it contains words of support for the Belgian people from many of the great and good of the day. There are illustrations by Edmund Dulac and Arthur Rackham to name a couple, pieces of music written by Elgar and Debussy and others. I bought it for all of £3. Beside it was a copy of Queen Alexandra’s Christmas Gift Book which I’ve never seen before. Again, this was sold for charity, but was published in 1908. She was apparently a keen photographer so it’s full of paper copies of many of her photos, tipped in as if they were in a photo album. There are a lot of family groups – the Empress of Russia appears a lot, but there are also photos of fjords and other places she visited and ships, including The Nimrod which was Captain Shackleton on his way to the South Pole in 1907. Another three quid – what a snip! 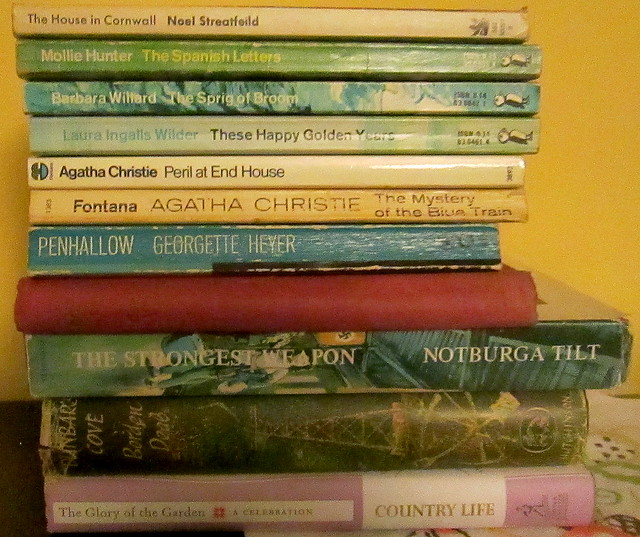 The Glory of the Garden – snippets from Country Life magazine over the years.

The Strongest Weapon by Notburga Tilt (an Austrian Resistance member in WW2 – signed.)

Dunbar’s Cove by Borden Deal. I’ve never even heard of this book but it seems to be well liked on Goodreads. I’m shocked to see that a copy with the dust jacket just like mine is on sale on Amazon for over £220. Mine cost £1.

Three of those are Puffin books and I have a feeling that I might just have inadvertently started a bit of a collection as I think I bought a couple a few weeks ago.