The Case of the Missing Bronte by Robert Barnard was first published in 1983.

Suoerintendent Perry Trethowan of Scotland Yard is driving back to London with his wife Jan after visiting his family in Northumberland, but the car breaks down in the Yorkshire Dales and they’re forced to spend the night in a small village.

While having a drink in the local pub they’re joined by a local. Miss Edith Wing is a retired schoolteacher and she tells them she has just inherited a lot of old documents from her cousin. One of them looks like it might be a Bronte manuscript, it looks very similar to their juvenilia so is written in tiny print and is almost illegible. She wonders if they know anything about such things. Jan confesses that she loves looking at old documents.

In no time they’re all involved in dangerous situations, it’s probably not sensible to talk about such a possibly lucrative possession in the local pub!

I liked this one although it is definitely on the bizarre side, but that’s not a problem for me. While reading it it seemed like a vintage crime publication to me, it might have been something to do with the book cover which is reminiscent of the British Library covers, but I don’t regard 1983 as vintage, maybe I should as it’s almost forty years ago now. 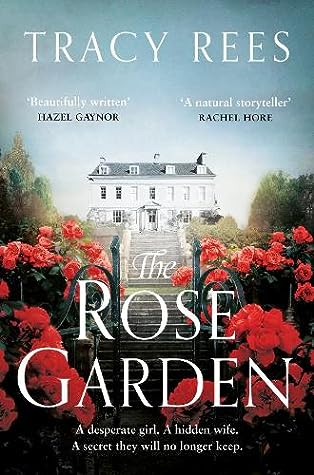 The Rose Garden by Tracy Rees is the first book that I’ve read by the author and although I enjoyed it in parts it did have problems for me as there were at least a couple of glaring historical mistakes in it and the relationships between the women seemed unlikely to me.

The setting is 1895 London where Mabs is working as a docker, dressed as a boy to get the work as obviously females can’t work there. Her mother is dead, her grieving father has taken to drink, and she and her younger siblings are facing starvation. Against all the odds Mabs gets a job as a companion to Abigail a woman who has just moved to London from Durham with her husband and children. Abigail seems selfish and spoiled to Mabs and not ill at all, but the husband has asked Mabs to spy on his wife and Mabs realises that things are not at all as she was led to believe. Olive Westwater is a spinster, only child of very wealthy parents and at 28 she doubts that she will ever marry, but she has a yen to have a child and so adopts a three year old girl against her parents’ wishes. Through Olive the lives of them all become woven together and when Abigail’s situation becomes dire it’s to Olive that Mabs turns to for help.

I was unable to suspend my disbelief in this premise, it just seemed far too unlikely for me, but if you aren’t as pernickety about details as I am then it won’t bother you.

The glaring historical mistakes are a mention of the phrase ‘the elephant in the room’ which is a very modern phrase, apparently first used in the US in 1935 but it didn’t reach the UK until years after that, probably around 1990 by my reckoning. The author had difficulty writing the voices of the various characters. There’s just no way that a wealthy and genteel Victorian lady would have used the word ‘guff’. The other mistake was that one of the young girls in the absolutely poverty stricken family which could barely afford food was still at school aged 15. Poor children back then left school at 12 and particularly in England free secondary schooling wasn’t available until 1944 and even then most people left school at the age of 14. The Scottish education system has always been different and we had free education decades before England had.

Also there is just no way that a seventeen year old girl could have got work at the docks even dressed as a boy. In those days, and up until comparatively recently (1960s) dockers were hired by the day and had to stand every morning looking fit and strong, hoping to be chosen to work a shift that day. A skinny girl would never have passed muster under those circumstances. These are all problems that should have been picked up by an editor but maybe nobody cares that there are big holes in the plot. Maybe I’m weird to be bothered by things like that – but that’s just me!

My thanks to Pan Macmillan for sending me a digital copy of this book via NetGalley.