It’s ages since I wrote about some Guardian Review articles that I think might be of interest to people, so here goes!

Last week’s Review had an article in it about Patricia Highsmith, it sounds like she was a very strange character herself. You can read it here. The world’s champion ball-bouncer is a short story by her which has been unseen for 73 years.

There’s a new Dostoevsky out – Dostoevsky in Love by Alex Christofi, it looks like it might be an interesting read.

I will definitely be trying to get my hands on Luckenbooth by Jenni Fagan. It’s a novel which is set across nine decades in an Edinburgh tenement.

If SF and Fantasy are your thing then have a look at Eric Brown’s column here. 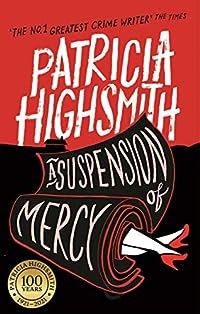 A Suspension of Mercy by Patricia Highsmith was published way back in 1965, but it was in the 1970s that I discovered her and then went on a Highsmith binge, recommended to other people that they should read her books, and then for some reason didn’t keep up with her books myself in subsequent years.

So this was a recent library choice for me, I’m fairly sure that I didn’t read this one in the 1970s. It has been republished as a Virago Modern Classic.

Sydney Bartleby is a young American writer and he is living with his wife Alicia in the wilds of rural Suffolk. Sydney has a very vivid imagination and I suppose he is the writer’s equivalent of a method actor as he feels the need to act out one of his plots to see how he will feel, he wants to get the emotions correct as he digs a grave in a remote patch of countryside.

At times I was in two minds as to whether Alicia had actually been murdered by him or not, so when Alicia does disappear from their cottage, supposedly having gone to visit her parents but never arrived there, things look very bad for Sydney indeed. All the clues point to him having done her in and everyone is sure he is guilty, including the police.

This was a cracker of a book, really full of suspense. Why oh why have I left it getting on for 40 years since I read a Patricia Highsmith book?!

Do you have a favourite book by her which you can recommend me to read next?