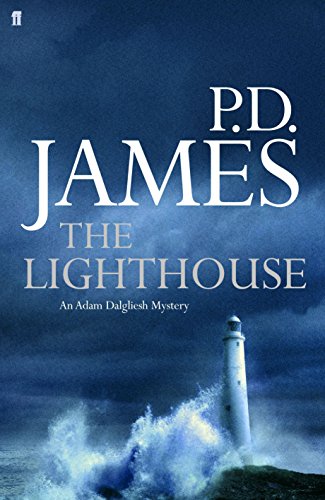 This was the last book which I read in 2011 and it was first published in 2005 and was a purchase from the library book sale, at only 50p for a hardback I just couldn’t resist it. I first read P.D.James books in the 1980s and of course lots of them have been adapted for TV but I rarely watch them because I’m not all that keen on the actor who plays Commander Adam Dalgliesh, but he was the actor that P.D. James wanted to play the part. I think she must have been doing what quite a few authors do – write themselves the perfect partner. As Dorothy L. Sayers did with Lord Peter Wimsey.

The Lighthouse is a classic detective story really, set on Combe Island which is an imaginary island off the Cornish coast. So when a murder occurs there’s a limit to the number of possible culprits. All very Agatha Christie-ish so far, but I must say that I think P.D. James’s writing is superior to Christie’s. Her descriptions are quite poetic and I have to say she is really good at ‘painting’ the scenery, which is just what I like. This is generally done through the eyes of Dalgleish as he is a poet when he is not detecting.

Combe Island has been owned by the same family for hundreds of years but in recent times it is being used as a place where the high fliers of the world can go to de-stress in an atmosphere of peace and safety. So when one of the inhabitants is found dead Dalgleish and his team consisting of Detective Inspector Kate Miskin and Sergeant Francis Benton-Smith are helicoptered in to investigate.

I enjoyed this book even if it wasn’t twisty-turny enough for my liking and although I wasn’t even trying to think about it it suddenly flashed into my head who the culprit was really early on in the book. I can’t make up my mind how I feel about that, it’s a bit of a toss up really. On one hand it’s annoying that I suspected the correct person all the way through but then in some way I feel quite chuffed that I got it right. Anyway, it’s definitely worth reading if you like detective stories.