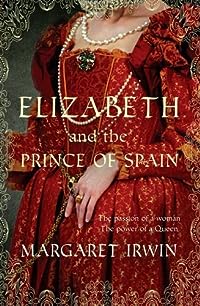 Elizabeth and the Prince of Spain by Margaret Irwin was first published in 1953 and it’s the third in the trilogy which begins with Young Bess with the second one being Elizabeth, Captive Princess.

Although I really enjoyed this one I didn’t love it as much as Young Bess, I’m sure that that is because the subject of that one is more interesting and speculative as well as suspenseful. Mind you there is always suspense, or certainly there would have been for Elizabeth herself as her life was held in the hands of Queen Mary, her rather flaky half-sister. Not that Mary Tudor really acknowledged her as she preferred to believe – or pretended to believe – that Elizabeth was not Henry VIII’s daughter but was the daughter of Smeaton, the music teacher who had been accused of adultery with Anne Boleyn.

Anyway, this one begins in 1554, Philip has been told that he must marry Queen Mary Tudor, he’s not keen to do it, she’s years older than him, sickly and he’s happy with his own choice of woman with whom he has had several children. The prospect of living in the notoriously damp and cold England doesn’t attract him either but it’s a political marriage, forming an alliance between England and Spain against France. It would also strengthen the English Catholic ties to Rome which had been broken by Henry VIII.

Philip’s father had been keen on Princess Elizabeth being executed before Philip sailed for England, he saw her existence as a threat. When Queen Mary died he wanted Philip to become King of England which wouldn’t be so easy with a daughter of Henry VIII in the foreground.

We’ll never know what the relationship between Philip and Elizabeth was but as Elizabeth survived I think it’s fair to say that she must have exerted her charms and her political instincts to do so, at the same time as managing to keep on the right side of Mary who was an awkward character at the best of times but as she was always ill and was jealous of her beautiful half-sister then Elizabeth must truly have felt that the sword of Damocles was constantly hanging over her.

Despite obviously knowing the outcome of this story the author managed to create an atmosphere of fear and suspense.

It was a surprise to me that Philip II was described as being silver fair, not at all as I had imagined him, or he had been portrayed in any TV adaptations.