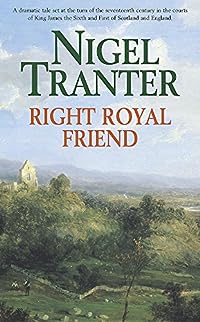 Have you ever read anything by Nigel Tranter? When I added this book to Library Thing I noticed that only nine people have done so, I think that’s the lowest ever for me.

Anyway, Nigel Tranter was a Scottish author of historical fiction, amongst other things. He wrote more than 90 books and when he died in 2000 there must have been a queue of books waiting to be published because his books were still being published in 2007. This one was published in 2003. If you’re into Scottish history his books are a painless way of learning about it because they are historically correct and he wove his stories around the facts.

Right Royal Friend is mainly about David Murray, the second son of Sir Andrew Murray, and how a chance meeting with the then 14 year old King James VI of Scotland on a Scottish hillside led to him becoming a close friend of the monarch.

Queen Elizabeth I of England has James’ mother, Mary Queen of Scots in captivity but James is only concerned with being named as Elizabeth I successor.

This is the first book by Tranter which I’ve read and I must say that I enjoyed it, but I have to say that there is necessarily quite a lot of info dumping which most Scottish people would probably already know about. I enjoy reading descriptions of landscapes and for me that was a bit lacking in this book, which is strange because I think of that as being a feature of Celtic writers.

The settings happen to be very close to where I live in Scotland and I’ve been in all of the castles and palaces which are mentioned so it was easy for me to imagine myself there but for other readers I think it would have added atmosphere if the buildings and villages had been better described too. I suppose that would have made the book a good bit longer though.

Anyway, I’ll certainly read more by Nigel Tranter and I’d recommend his books, especially to anyone who would like to know what was going on in Scotland’s history at a time when it tends to be England which is concentrated on. I think his books would be interesting for anyone visiting Scotland and intending to visit historic places.