We planned to visit the Roman parts of the small village of Aldborough on our way back home to Scotland after visiting Bletchley Park recently, and even although the rain was chucking it down we decided to stop off there anyway for a rest and to stretch our legs a wee bit. We did find the ‘Roman town’ but there was a locked gate across the entrance. Due to Covid the English Heritage site was shut. You can have a look at the Aldborough Roman site here. Fingers crossed we’ll actually be able to visit again in the future.

The visit wasn’t a dead loss though as the village itself is lovely even in the rain, and has some interesting old buildings. Apparently the Roman town originally covered the whole of the ‘modern’ town. You can read about it here. The famous Ninth Legion had a base here, until they disappeared! 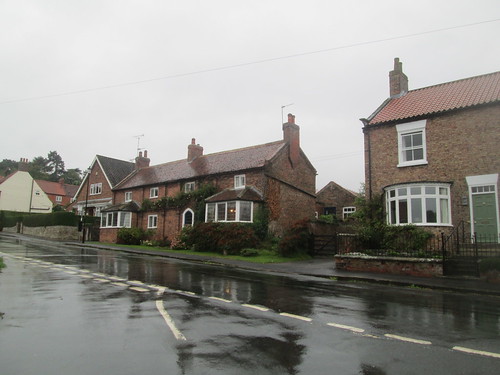 It was obviously a very important military settlement and I think if I lived there I would be spending a lot of time in the garden digging as a lot of Roman artefacts have been discovered in this area. We only spent about fifteen minutes looking around, due to the weather but I’m looking forward to going back there one day, when/if things ever get back to normal. Nicola Sturgeon, the Scottish First Minister has asked us not to travel out of our own area in these pandemic times. 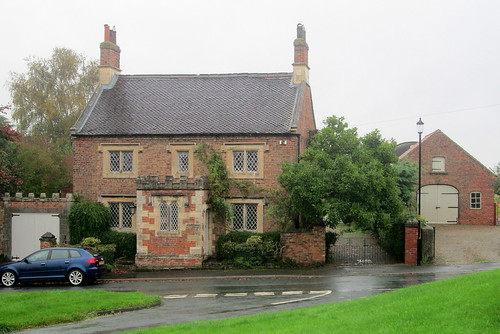 I can’t see any mention of the very prominent Maypole anywhere on the internet which is strange as I’m fairly sure there aren’t that many around. I ‘discovered’ this village when reading my copy of the AA Book of British Villages (1980) and it states that the maypole is used in the second week of May every year for maypole dancing. It sounds like the village has a good community spirit anyway. There are some lovely Georgian houses, they always make me think of Jane Austen. 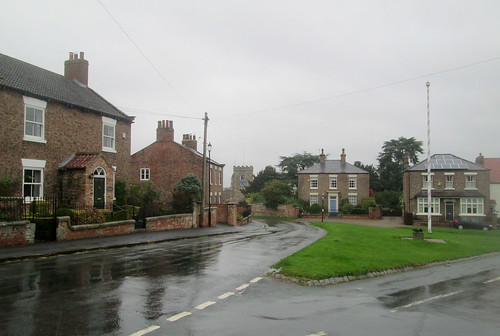 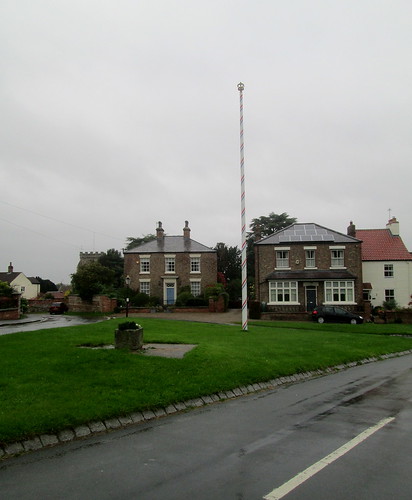 There’s something so English about a village green and obviously it should have an oak tree. 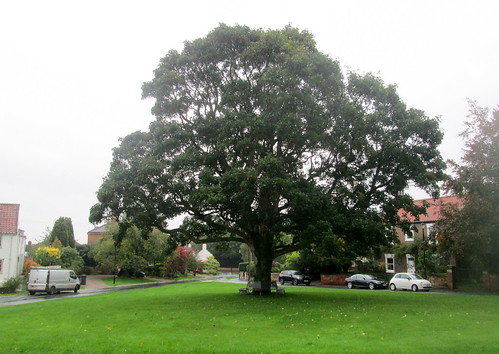 This village green boasts a set of stocks too, I imagine that in May and at summer fetes they will be used with local worthies being put in them while people pay and queue up to throw wet sponges at them! 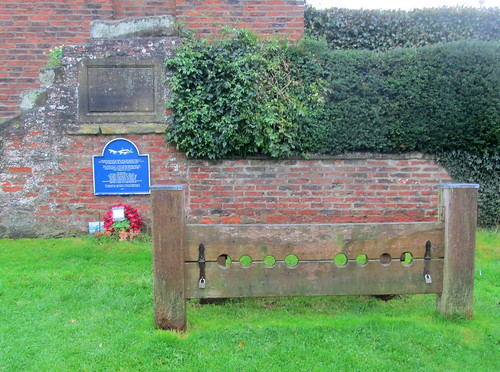 We squelched around the churchyard, St Andrews Church dates from 1330 and replaced the Norman church which had been destroyed by Scottish raiders (ahem) it’s not all that far from the Scottish Border really. It looks like the church has been extended over the years. 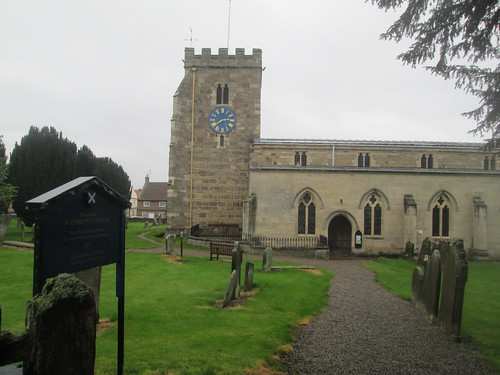 I think the wall which surrounds it dates from Roman times but has obviously also been extended. This is definitely a place that we’ll have to visit again. 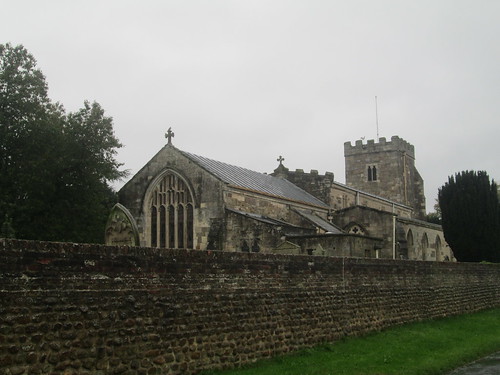 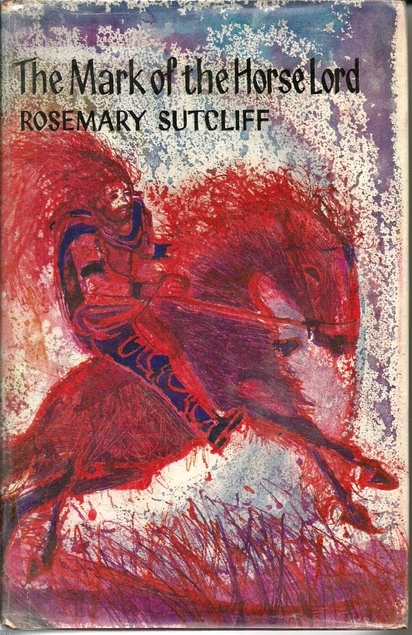 Participating in The 1965 Club encouraged me to read The Mark of the Horse Lord by Rosemary Sutcliff which I’ve had in the house for at least a couple of years. I would have read it sooner if I had realised that the setting is mainly in the exact place that I grew up – albeit some 2000 years or so earlier than when I was stravaiging about the land around Dumbarton Rock or Theodosia as the Romans called it, and Are-Cluta which is an ancient name for Dumbarton although it was more widely known locally as Alclutha. There is a handy map and glossary in my 1967 reprint of the book.

The Romans are in control of most of Britain and Phaedrus is a young red haired gladiator hoping to win his freedom after spending seven years as a gladiator. He does gain his freedom but a drunken night of celebration leads him into big trouble and imprisonment again.

He’s confused when he’s unexpectedly sprung from prison by a group of strangers, they had spotted how similar in looks Phaedrus is to Midris, their missing king. Eventually they talk Phaedrus into taking the king’s place and to try to eject the usurperer Queen Liadhan from Are Cluta (Dumbarton). Phaedrus will have to make the rest of the tribe believe that he is really King Midris. The real king has been blinded by Liadhan to make sure that he can never be accepted as their king again and he’s earning a living as a leather worker in the south.

While travelling north of the Antonine Wall to Dumbarton Phaedrus works hard at learning the history of all of the tribe so that he won’t be discovered as a fake Midris, and eventually a brutal battle ensues.

As you would expect of Rosemary Sutcliff this book is beautifully written, she does take some liberties with the geography of the area but not many readers would realise that. I was particularly pleased that she included an unusual character in the shape of a young warrior who just happened to be in touch with his feminine side when it came to clothes and jewellery. He was a bit of a fashion icon but the inclusion of Conory seems to have riled up the fundamentalist religious types one of whom cut her Goodreads rating right down to one star!!! for what she kept calling ‘content’. Honestly there is nothing in the least bit sexual in this book. Some people just go around their lives scouring everything for something they can object to, and if it isn’t there then they make up something that will feed their homophobia. I suppose it makes them feel superior somehow.
But we all know better don’t we?!

I’ll give it four stars on Goodreads. If you want to know what Dumbarton Rock (Theodosius) looks like have a keek at some of the posts on this link here.

For a much more detailed review have a look at Helen’s @ She Reads Novels
I read this one for The 1965 Club.

Amazingly, we actually went to the cinema in Dunfermline last night to see The Eagle which is based on the Rosemary Sutcliff book which I enjoyed reading years ago. Mind you it was SO long ago that I’m not sure how true to the book the film is. I don’t remember there being so much fighting and goriness but as that seems to be what most people want then they’re obviously going to add in as much as possible.

It’s set in Roman Britain and Marcus Aquila has been given command of a fort on Hadrian’s Wall and he is determined to gain back his family’s honour which was lost when his father and the Ninth Legion which he had command of, disappeared along with their golden eagle standard. The only way he can do it is to find the standard and take it back to Rome.

I quite enjoyed it but the battle scenes were so loud, they shook the whole place and it’s positively painful on my ears. Marcus and his slave Esca travel north into Caledonia/Scotland and some of the Scottish scenery is quite spectacular, the best part of the film for me really. It turned out to have a bit of a Romano-British Brokeback Mountain flavour to it, I think.

We hadn’t been to the flicks for ages, since we saw Tamara Drew actually because we didn’t get around to seeing The King’s Speech. I think we’re the only people in the western world who haven’t seen it. We did try when it was at the wee local cinema but we couldn’t get in as everybody else had booked their tickets! You live and learn!

We visited Corbridge in Northumberland during the summer holidays. The Roman remains there are quite extensive although it’s thought that there is still a lot to be found underneath the surrounding fields.

The town which I was brought up in is situated just to the north of the Antonine Wall which was the wall which marked the farthest point of the Roman Empire. They might have managed to get a bit further north but I don’t think there is any proof of that. I’ve always found it really funny that the Romans managed to conquer just about everyone else but the folks of the Dumbarton area were just too much for them to cope with.

So visiting this Roman ruin was a real novelty for us and there is quite a lot to see inside as well as outside. There is an interesting museum on the site which houses a lot of the artefacts which have been dug up from there. It’s well worth going to see if you’re in Northumberland.

Hadrian’s Wall is another great place (thing). It was built by the Romans to stop the Scottish savages from being able to attack the Romans. The first time I went there on a school trip with the Latin/Classical Studies department I couldn’t get over how big the wall is. The Romans must have been very scared of us. I’ve always fancied walking the whole length of it, the whole breadth of the border, but life has somehow got in the way, maybe one day!