We were driving in Perthshire one day last week and I spotted a Saltire in the sky! You might have heard of how Scotland’s flag (the Saltire) came to be a blue background with a white Saint Andrew’s cross on it, if not then you can read about it here.

Anyway, below is a photo of last week’s Saltire. Is it an omen for the independence referendum I wonder? I took the photo through the windscreen as Jack was driving along so it isn’t nearly as clear as it looked on the day. 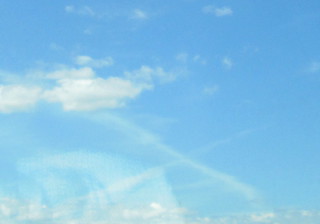 Oh all right, it probably is just two jet trails crossing the sky, but you never know, it might be an omen! 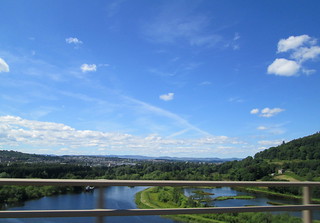 I took the photo above just a few minutes later as we were driving across the Friarton Bridge over the River Tay, just south of Perth. You can still just see the cross in the sky.