The leaves that are still on trees have been raining down on us over the past few days, the frost has left them unable to cling on any longer, but these photos are of my garden as it was on the 29th of October when the acers were at their most vibrant. A last loud hurrah before they have a rest. 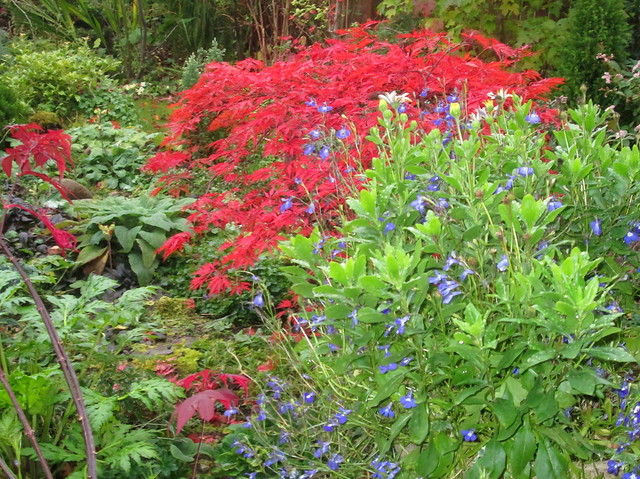 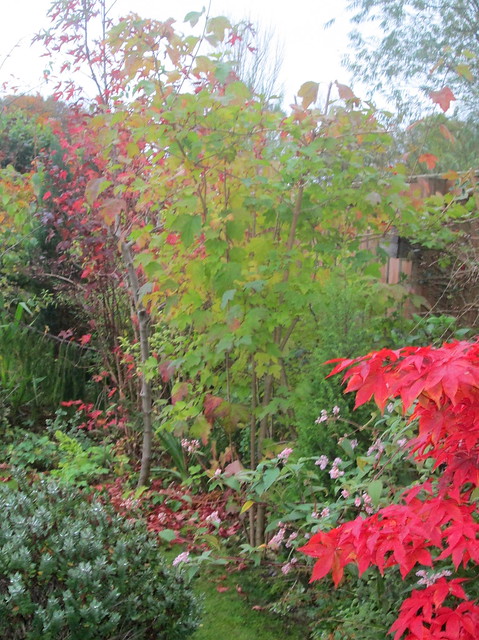 Below is a much smaller acer, a pieris and a conical evergreen which I love but can’t remember what it’s called, I’m really not very good with all those conifers. The blue/green one in the foreground is a creeping juniper I think. 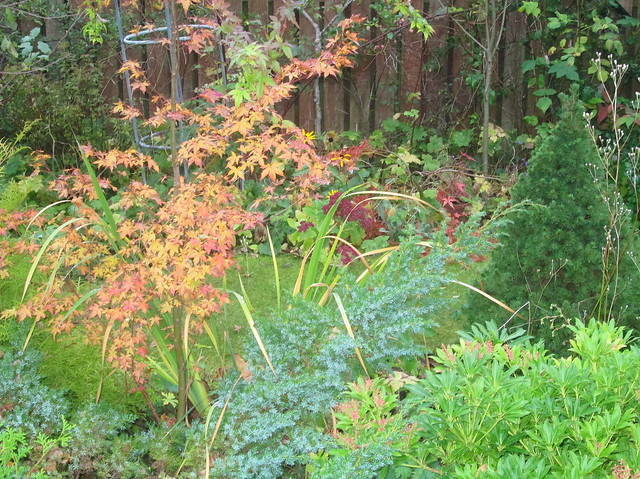 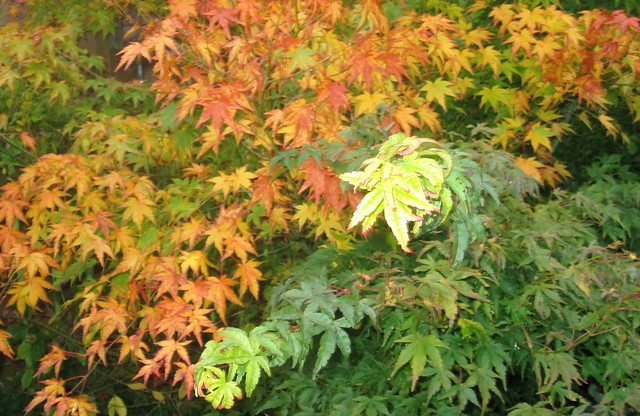 The mystery tree below which I bought for all of two quid at Hill House of Tarvit plant sale a few years ago is great – but still a mystery. It has lovely glossy berries and its leaves look a bit cotoneaster-ish, but it’s definitely a tree not a shrub. The heather has been looking a bit scruffy until now, it is great for autumn colour though. 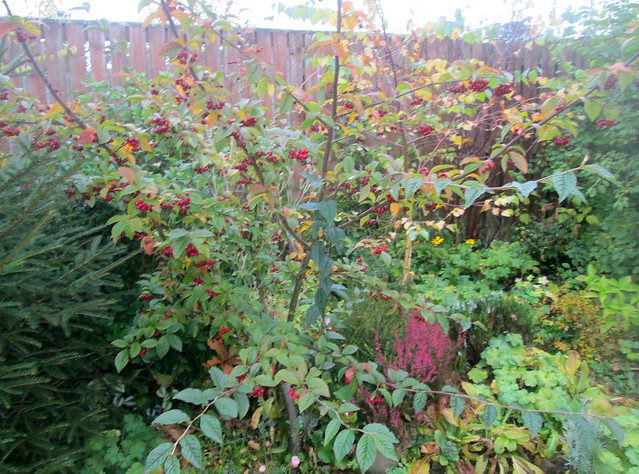 The bright yellow-ish conifers in the background are those ones that you can buy from supermarkets for about £1 when they’re just a foot or so tall. These ones are now five years old and although they were all the same size when I planted them two of them have had to be cut back because of frost or perhaps wind burn damage, but they’re still growing well and they have a lovely lemony scent when you brush against them. 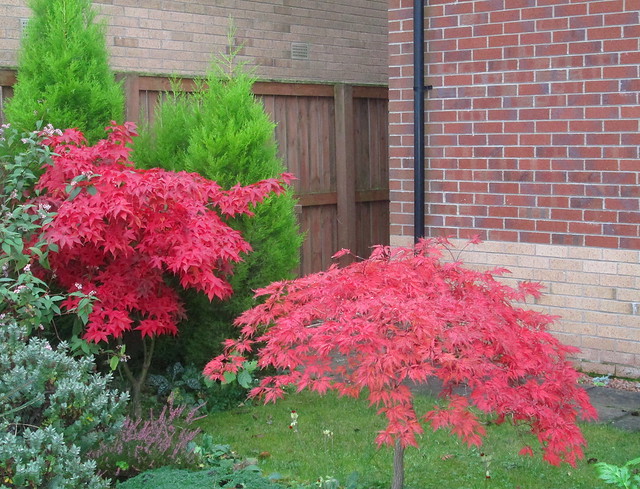 Well, it was nice for me to be able to remind myself what the garden looked like just a few weeks ago. I hope you enjoyed it too.

Some trees are beginning to get their autumn togs on already, but there’s still quite a lot of flower colour going on in my garden. The sweetpeas haven’t been great this year, I grew them from seed and they took ages to get going. 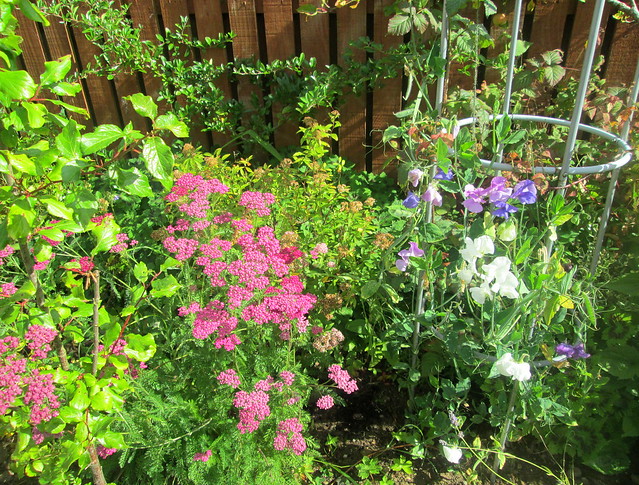 The rudbeckia below has been flowering for a long time, it’s definitely good value, especially if you get it dirt cheap from Morrisons as I did. The bees love it. 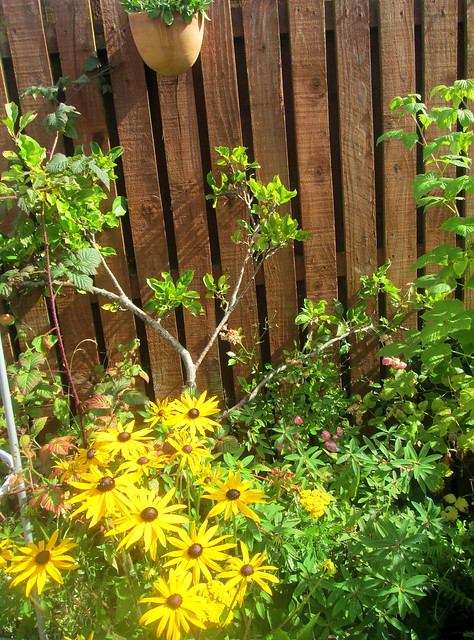 Every Scottish/Celtic garden should have a rowan tree (mountain ash) in it, to keep the witches away of course! 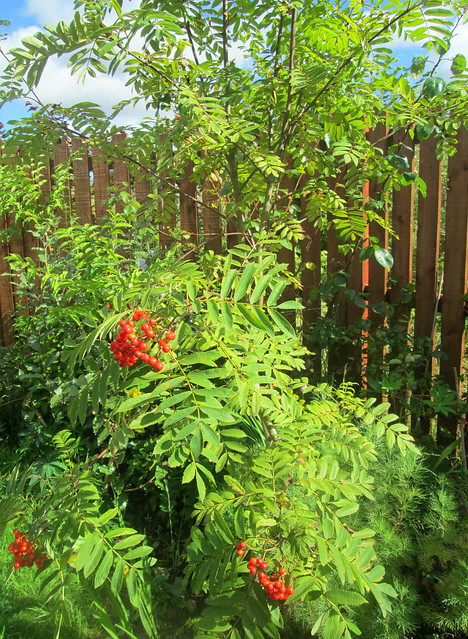 The striped grassy plant at the front of this photo is gardeners’ garters, so called because old gardeners used to use it to tie around their trouser legs to stop anything from shooting up there – like a rat! It grows very rampant, so I’m keeping an eye on it in case it decides to mount a take-over bid. 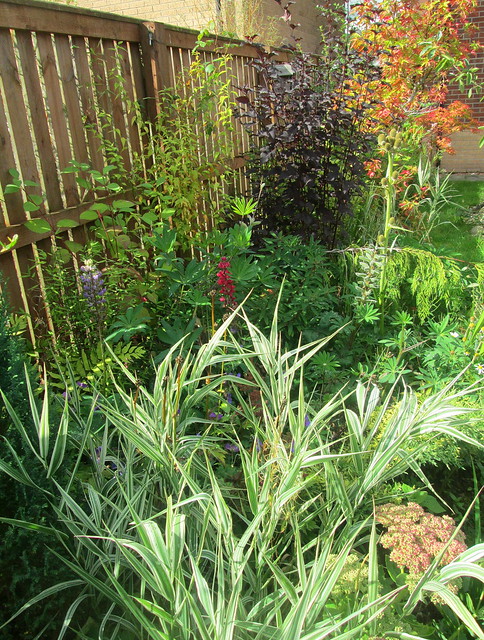 There’s a plethora of plants in the photo below, a rose, fuchsia, pieris, lychnis and all sorts. 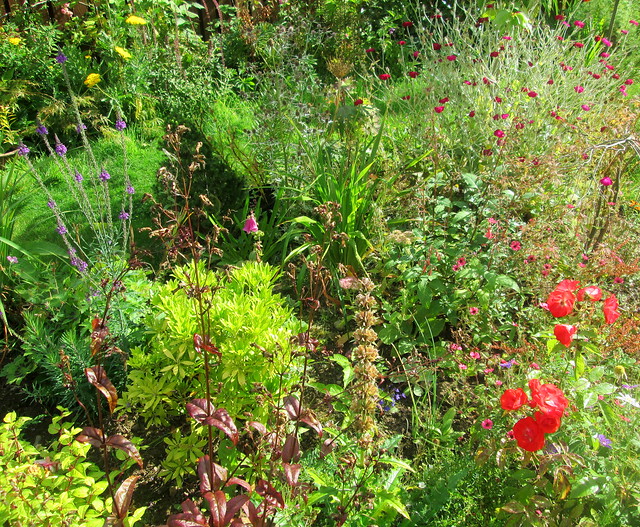 Although I’m not crazy on exotic plants (the kind you have to tie blankets around to get them through the winter) – I do love acers, they’re hardy here in the east of Scotland and grow well despite being so delicate looking. 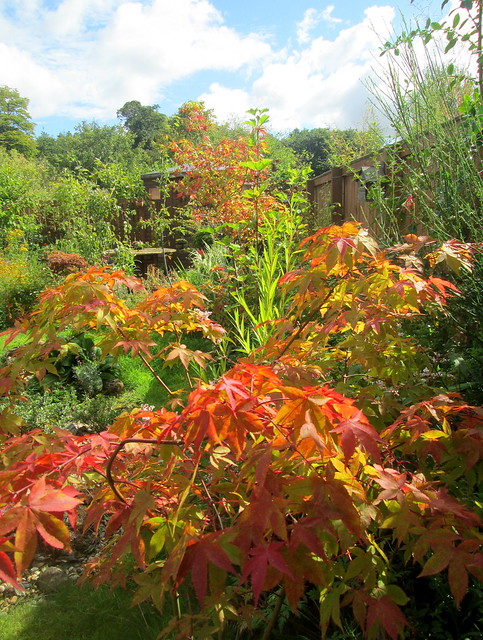 Peggy yells rainbow every time she sees one, that was quite often when she was in Scotland anyway, and she had to get a photo of them. Apparently they’re quite rare where she lives in the US, I thought I would copy her and take a photo of this one from my house, they are not rare here of course! 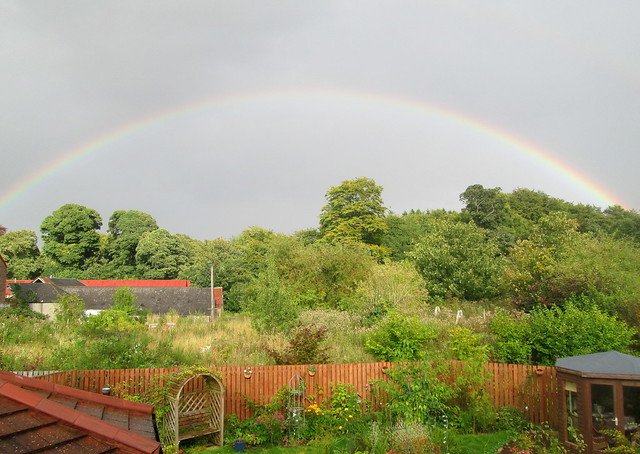 It’s about ten days since I took those photos and since then I’ve had to have a bit of a garden tidy up and cut things back, but it’s still looking fairly decent.

I’ve been having a battle with ajuga, another plant from Morrisons, it cost me all of 99p and before I knew what was happening it had covered a third of my rockery having crossed over the grass to get there. What a monster of a wee plant it is, worse than mint! Don’t plant it whatever you do.