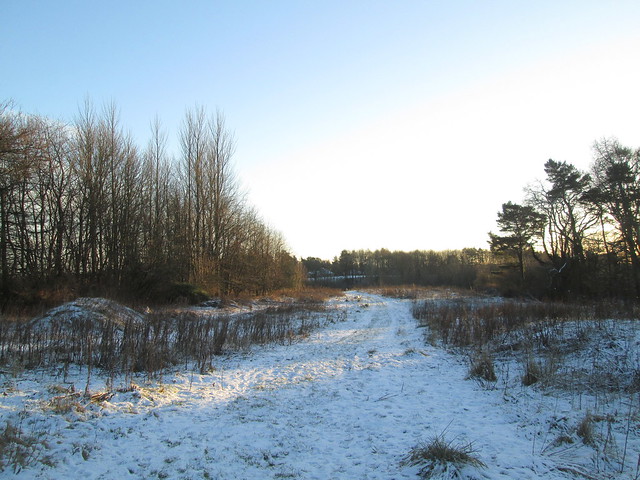 After what seems like a couple of months of almost non stop rain we were promised dry but colder weather. I was quite surprised when it snowed though, just an inch or two lay, which is enough for me. I hadn’t had a decent walk for ages due to all the rain, so I took myself out the back gate this afternoon and took the camera with me. Come and join me on my walk!

Below is the edge of a golf course so it’s a bit more manicured looking. 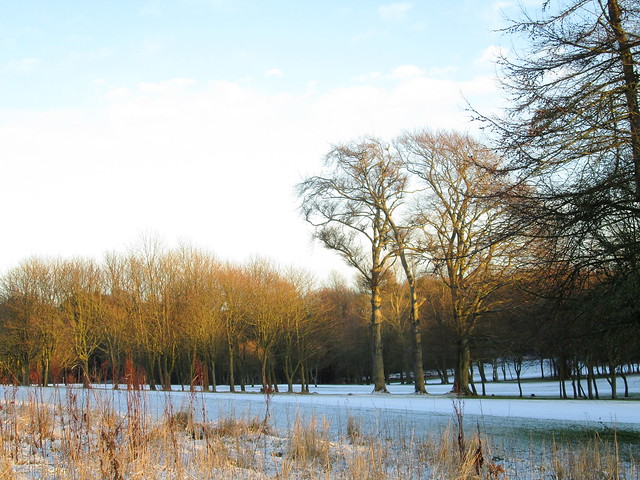 What do you call these golf things, water traps maybe? Anyway today it was well frozen over. 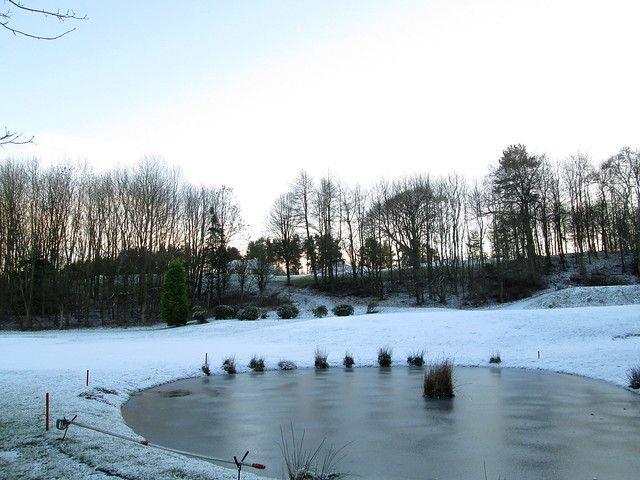 Yes, that is actually the sun shining on those trees, amazing. 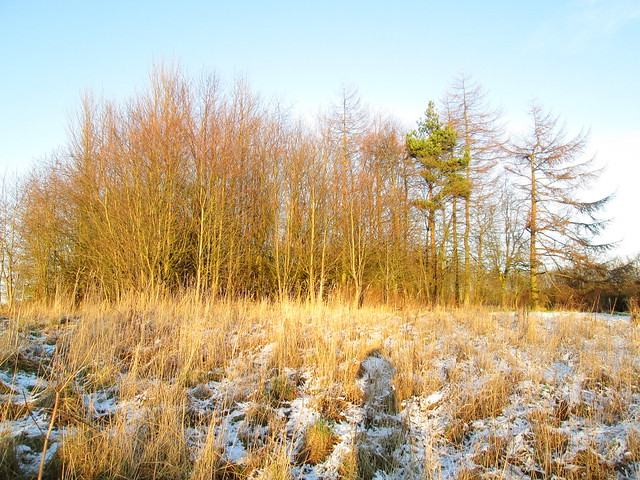 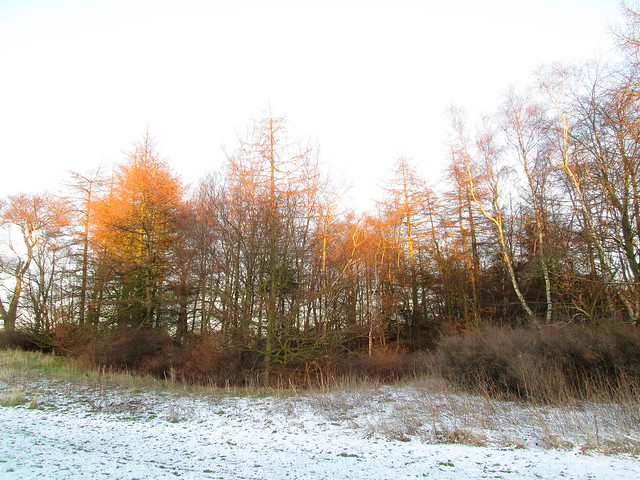 I had the whole place to myself. I saw plenty of dog and dog walker tracks but no sign of actual people or animals, and sadly no deer, even though I went off piste and walked through the woods and rough grass. 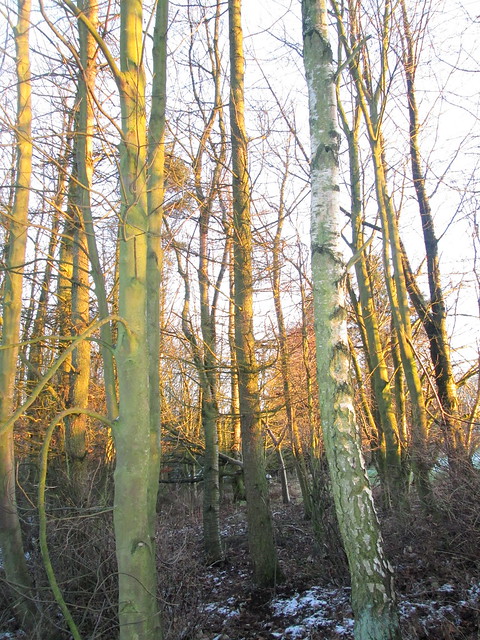 It was great to see the sun at last. 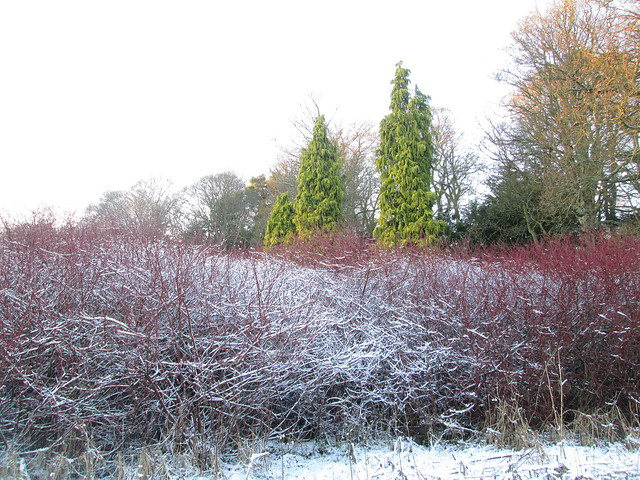 I hope that wee stroll blew some of your cobwebs away – it certainly got rid of mine!

I was showing my sister around our new place today and we were looking at the garden from the kitchen when we suddenly realised that there were birds swooping and circling all around the garden. The swallows have arrived, they definitely weren’t here yesterday. What is that saying? something like – one swallow does not a summer make. Well umpteen of them were swooping, in fact in Scots you could say that there was a wheen o’ them, meaning a lot. I suppose that means that it is really summer, but not going by today’s weather it wasn’t!

Unfortunately they move too fast to get a photo of them, but a few hours later I was upstairs, still trying to unpack books and find places for them, when I realised that a deer was walking very close to our garden fence, I rushed to get the camera and was lucky that it was in no hurry to move on. Then I spotted another one following the first one. We’re certainly more rural here than in our old place. 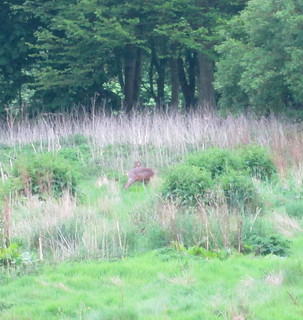 The one above was a bit of a contortionist so it looks really weird. But the photo below looks more normal, I’ve seen more deer than ever before this year, often just standing in fields or lying down in the sun by the edge of fields. 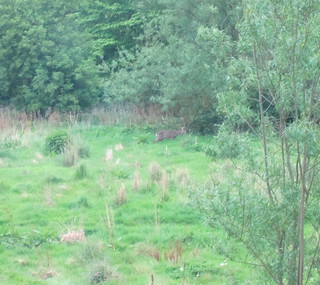 I was thrilled to bits to see them but I suppose I’ll eventually get blase about them.

And here are some garden update photos. I’ve been busy trimming the grass edges and I’ve used the excess turf to make an oval in the grass, roughly the shape and place that I want to put a rockery, eventually. That’s going to be a long term project. You can see that I’ve begun to put the bones of the garden in place, in the shape of small trees. It’s beginning to feel like a garden already. 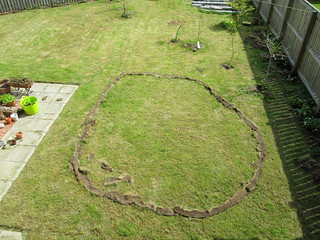 The photo below is of the garden beyond the circle, we have decided to put some sort of structure on those concrete blocks, probably a summerhouse as that was what was there before, it’ll make a nice focal point. I suppose I should have taken my washing line down! 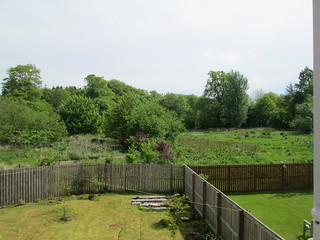 Beyond the fence is the land where the deer were walking.

I’ve just looked up that quote and it turns out it was Aristotle who said it.