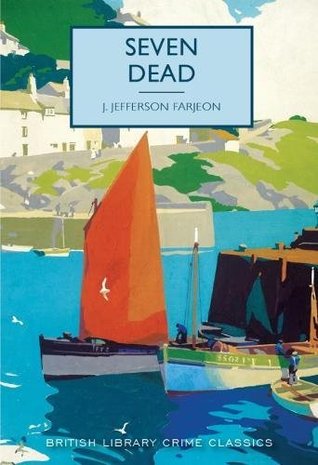 Seven Dead by J. Jefferson Farjeon was first published in 1939 but I read a British Library Crime Classics reprint with a rather attractive cover of a harbour and yachts.

The book begins with Ted Lyte a nervous first time burglar breaking into a remote house by the coast. It seems that the house is uninhabited so he decides to take a look around, hoping to find easily portable silver.

One of the rooms is locked, presumably it has something worth stealing inside it, but when he gains entrance he gets the shock of his life. In a panic Ted rushes out of the house but realises that someone is chasing after him. Shedding silver spoons as he goes Ted runs straight into a policeman and ends up being taken to the local police station, he’s a jibbering wreck.

Thomas Hazeldean was the pursuer and he had just come off his yacht, but it’s not long before he’s on it again and sailing for Boulogne where he hopes to get to the bottom of the mystery.

I had some problems with this one because although it’s not long at all before the crime takes place the whole thing seemed a bit too disjointed to me and unlikely. Farjeon tried to introduce witty dialogue between the police but it really didn’t work. It’s a bit of a locked room mystery, a bit missing person, a bit of vengeance, a bit of romance. In fact it’s just a bit too bitty for my liking. I could just be nit-picking though.