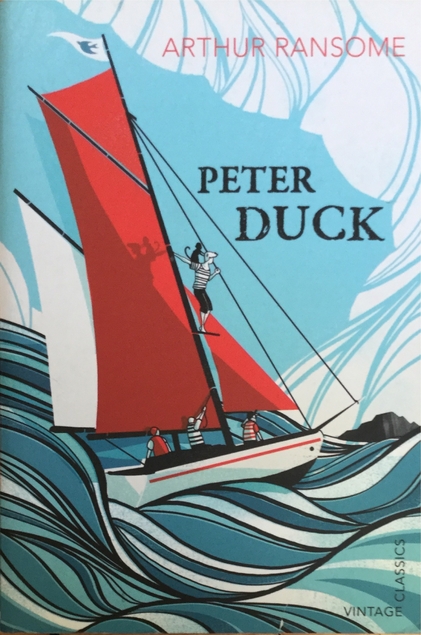 Peter Duck by Arthur Ransome is the third book in his Swallows and Amazons series, it was first published in 1932. This one seems to be very difficult to find in second-hand bookshops and a good friend of mine ended up buying me a new copy of it.

Peter Duck is an old sailor, commonly known as an old salt, he lives in Lowestoft and is spending his time at the harbour watching everything that’s going on and wishing he could go out to sea again while fearing that he never will. He has sailed all around the world in clippers with wool and tea, but his sailing in recent years has been limited to going up and down the local rivers with potatoes and coal.

When he realises that one of the ships in the harbour is on the serious business of stocking up on food, water and everything from the chandlers that they could possibly need for a long voyage he’s very interested. The Wild Cat is a schooner which is going to be crewed by Captain Flint alias Uncle Jim and the children of Swallows and Amazons fame – Nancy, Peggy, Titty, Susan, Roger and John, accompanied by Polly the parrot and Gibber the monkey.

When another adult crew member is unable to join them at the last minute Peter Duck steps in to fill the void. He’s thrilled to have the chance of getting on the high seas again.

But there’s another very smart schooner in the harbour and the captain – Black Jake – has been watching everything that has been going on. He’s an obvious baddy and after hearing Peter Duck telling a tale of his childhood experience of seeing treasure buried on a remote island he’s been determined to find it. So when the Wild Cat sails out of the harbour she’s closely shadowed by Black Jake’s schooner Viper. That schooner is crewed by ex-convicts, a violent bunch of desperadoes.

The Wild Cat heads for Peter Duck’s Caribbean island, named Crab Island by him, by way of the Bay of Biscay through heavy seas, and eventually manages to shake off the Viper. At one point the two ships had been so close that it looked like the crew of the Viper would be able to board the Wild Cat. The young red-headed lad called Bill who had been on the Viper manages to escape from it and is helped onto the Wild Cat by the Swallows and Amazons. He has led a dog’s life on the Viper being frequently whipped, but he’s a knowledgeable sailor and a great help aboard the Wild Cat.

This book is really an updated (for 1932) version of a classic tale of piracy, the children have a lot to learn about real sailing, not just rowing around on a lake. It’s a good old adventurous romp with some danger thrown in – just what I was needing really.