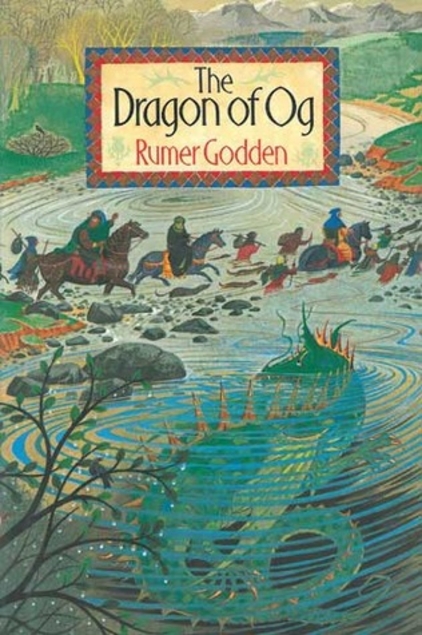 I read The Dragon of Og by Rumer Godden ages ago but I’m so behind with some book thoughts that I’m only getting around to it now. It was published in 1981, it’s only the second or third children’s book by Godden that I’ve read and I must admit that it was the book cover that attracted me to it although I’m quite a fan of her books for adults. Pauline Baynes illustrated the book in colour and black and white and the cover. I’ve always liked her designs, she designed C.S. Lewis’s Narnia books in the 1960s.

Anyway, I was particularly delighted when I started to read this one as the setting is the Scottish Borders at a time when the castles were made of wood. The Castle of Tundergarth stands high on a hill overlooking broad meadows and forests through which flows the Water of Milk which isn’t as benign as it sounds as beneath its pools lies a deep cave where a dragon lives.

This isn’t an ordinary dragon though, he’s a lonely soul as his mother left him at the cave as a youngster and he has no friends, and no idea of what it means to be a dragon. The young wife of the new laird befriends him, but the laird isn’t pleased with that as Og the Dragon occasionally eats one of his bullocks and the laird is determined that Og must die. Matilda and the local villagers are up in arms about that. The story is based on an old legend of the Scottish Lowlands.

What amazed me about this book is that Godden writes quite a lot of the dialogue in Scots, using a fair few Scots words and ways of speech. She even uses correctly amn’t I instead of the less grammatical English aren’t I. That is a big bugbear of mine as editors often wrongly anglicise it and even directors have Scottish actors saying it the English way when they definitely shouldn’t be as they are speaking Scots.

I always thought of Rumer Godden as being one of those very English women – in the way that a woman who had grown up in the Indian Raj always was. But after a teeny bit of research I discovered that in her old age she moved to the Scottish Lowlands to be close to her daughter. She certainly soaked up all of the atmosphere of the area, she must have enjoyed living here I think.