I never did get around to signing up for Margaret Kennedy Day but I did read The Ladies of Lyndon a couple of weeks ago – so, here goes.

The Ladies of Lyndon is Margaret Kennedy’s first novel and it was first published in 1923 but my book is a Vintage Books reprint.

I enjoyed Margaret Kennedy’s writing, in some ways she is a bit of an updated Jane Austen, the surroundings are similar, a large country house and several ladies, mothers and what seem to be unlikely marriages.

Mrs Varden Cocks has one child, a very well brought up daughter called Agatha and as Mrs Cocks believes in early marriages for young women that is exactly what Agatha does. Mrs Cocks is obviously the type who wants to get her daughter ‘safely off her hands’ as quickly as possible. Agatha had previously had a bit of a thing with her cousin Gerald, but it’s the handsome and well off John Clewer that she marries, so becoming the mistress of Lyndon, the large country house.

John has a younger brother called James and he’s very much the black sheep of the family. In fact some of them would like to have him committed to an asylum. James is just different from the rest of them and he is really only interested in painting, something the members of his family just don’t understand.

As you would expect James is unconventional and his choice of wife is very much frowned on too, she’s a housemaid and very much wants to stay exactly as she is, she has no intentions of being something she isn’t, not even when she subsequently ends up being Lady Clewer.

James is far and away the most interesting character in the book but he is really only on the periphery which is a real shame. As I said, I enjoyed this but this is the first book by Margaret Kennedy that I’ve read and I’m sure her writing must have developed and improved as her writing career advanced. I’ll be reading more of her later books anyway.

Books are still coming into the house faster than I can possibly read them. Even although I don’t work nowadays I still only manage to read at most two books a week, unless I’m on a vintage crime binge and then I can read more. When you consider that most weeks my book ownership is going up by four or so books, you’ll realise that I’m never going to be in a position of having nothing at all to read. 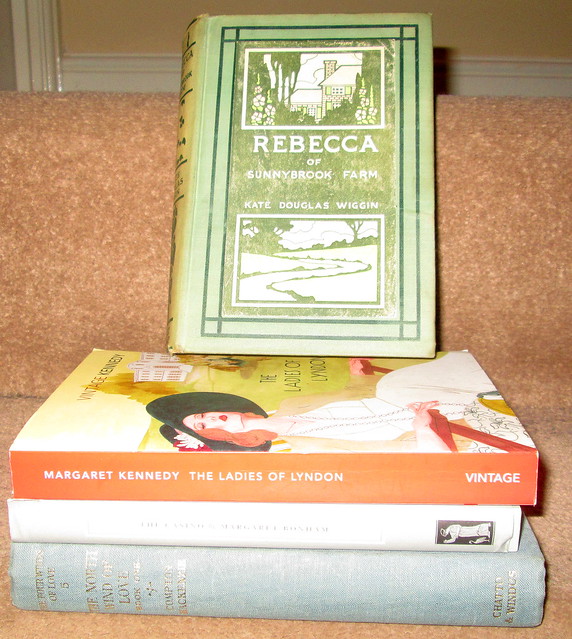 Rebecca of Sunnybrook Farm is pure nostalgia. All of my childhood books were given away by my mother when my back was turned, I think my Rebecca book was a cheap paperback, but I couldn’t resist this hardback from 1903. I love its cover and I’ve just realised that it’s a first edition, not that I’m bothered by such things, and it seems to be dirt cheap on the internet anyway.