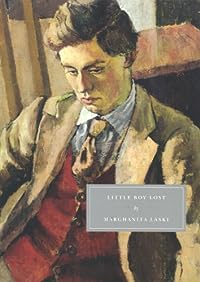 Little Boy Lost by Marghanita Laski was first published in 1949 but it has been republished by Persephone Books.

Hilary Wainwright had been married to a French woman, Lisa and they were living in France with their baby son John, unfortunately Hilary had to leave his wife and son in France as they weren’t well enough to flee when the Germans invaded France. Hilary only received a few letters from his wife after that and he has no idea what has happened to them. Lisa had been working for an escape organisation helping British servicemen.

In 1943 a Frenchman tells Hilary that Lisa is dead, having been rounded up by the Gestapo, but his son may still be alive, and after the war Hilary tries to track John down, but in a Europe full of displaced and orphaned children it’s a huge task, and he has no idea what his son would look like. He’s not even sure if he wants to track him down, he’s planning to marry again and a young son by a dead wife wasn’t in his plans.

This was a great read with a main character who is anything but perfect but is completely believable and understandable. The book also gives an authentic view of France and the French as they struggled in a post war society with little to live on and memories of who did what with whom during the German occupation.

I didn’t even realise that this book existed before I spotted it at the St Andrew’s and St George’s Edinburgh booksale. I really like the previous two books which I’ve read by E.M. Delafield, so I snapped this one up. My copy is an old one from 1940 but I believe this book has been reprinted fairly recently.

It’s the beginning of the war, the time when nothing much was happening so it was called ‘the phoney war’. Everyone seems to have been desperate to get into some kind of war work, to ‘do their bit’, and the Provincial Lady was no different. This is a commom theme in early Second World War era novels, whether the author is someone like Angela Thirkell or Evelyn Waugh.

Lots of people must have seen the whole thing as a way of getting out of their particular rut and making their life more exciting. For some of them it probably became too exciting but there’s no doubt that for loads of people it was the best experience of their lives and peacetime, when it eventually came was an anti climax.

Anyway, the Provincial Lady has abandoned home and hearth with her husband’s blessing and is in London looking for war work which will help in the war effort. But so far there is nothing for anyone to do, she pulls strings and has meetings with various government types but the best she can manage is a job in a canteen, making tea for people who are practising first aid and air raid duties.

She has to make her way back to her Devon home to sort out domestic problems (you can’t get the staff, you know). Evacuees and rumours are the staple and everyone seems to think that the German people are going to revolt and get rid of Hitler, another war is unthinkable to some, especially those who lost sons in the First World War, which seems so recent to them.

Yes, so far so deja vu-ish, I hear you say, but there’s plenty of humour too, as you would expect from the Provincial Lady, and my copy is illustrated with drawings of scenes and characters from the book.

Obviously writing a book like this was Delafield ‘doing her bit’ as books like this one must have been a real comfort to people in wartime.

I always feel a bit shuddery when reading books like this one though as at this time there had been no actual air raids and so no civilian casualties, or even military ones. By the time the book was published in 1940 the readers must have been quite nostalgic for that strange time in 1939 when hostilities hadn’t begun yet. It’s just as well they didn’t know what was in store for them. 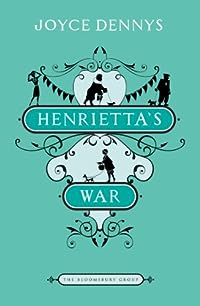 Well, I don’t know who to thank for pointing me in the direction of Joyce Dennys, but it was definitely a blogger, not that that helps much.

Joyce Dennys was a doctor’s wife who wrote comical articles for Sketch, and she illustrated them with cartoons. Her first article went down so well that she was asked to contribute regularly.

Her character Henrietta is really a thinly veiled version of Joyce herself, as she admitted she sometimes didn’t know where one ended and the other began.

The articles are all in the form of letters from Henrietta to her old schoolfriend Robert, who is doing something in the army – somewhere. Bloomsbury has reprinted them and I have to say that they are a hoot and must have fairly cheered up people in desperate times.

The usual wartime themes of rationing, and queueing, a lack of elastic and clothes in general are to the fore as you would expect. The small town in the west country, near Exeter, where Henrietta and her husband Dr Brown live, is inundated with evacuees and soldiery and it’s all jolly good fun! However, there is a serious side now and again, such as the complaint that women who were caught up in bombing raids and lost legs or whatever were given less compensation than a man with the same injuries. Mind you, it was news to me that anyone got compensation at all, I thought it was just put down to tough luck and there’s a war on you know!

You can see some of her cartoons and illustrations here.

And there’s more of her work on the BBC Paintings site here.

I was really chuffed to be able to get three Thirkell books at the market in Cambridge because they’re as rare as hen’s teeth here. Growing Up was first published in 1943 and this one is a first edition, though I’m really not interested in things like that, and it’s obviously not deemed to be valuable because it cost me all of £2. The book was reprinted in 1990 I think.

Angela Thirkell used Anthony Trollope’s setting of Barsetshire for her books and also a lot of the characters are supposedly descendants of Trollope characters. Thirkell nicks ideas quite shamefully really but her books are always entertaining and amusing although I think that in common with many authors of that era she throws a lot of characters at you and it can be a wee bit confusing at times until you get them all sorted out in your mind.

It’s set mainly in the villages of Winter Overcotes and Winter Underclose – and I can assure you that I saw places with far stranger names in my recent sojourn to the south of England – and of course it’s wartime with everybody worried about their loved ones who are off who knows where fighting for King and Country. All of the women seem to be knitting in what spare time they have, which isn’t much as they’re doing their bit and even the married women are working at the hospital, otherwise they would feel like traitors.

War doesn’t stop romance though and yet more inhabitants of Barsetshire discover that they know each other’s ‘people’ and end up pairing off. There’s fun and daftness on the way as ever and these books must have helped people through it all.

I’ve been reading the books out of order, just as I get them really but one day I intend to re-read them as they were written, if I ever manage to get them all. You can see a list of her publications here, if you’re interested.