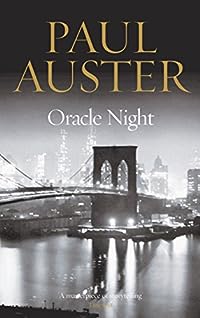 Sidney Orr is a writer who is recovering from an illness which has kept him in hospital for months, he had nearly died. Released from hospital he tries to re-build his strength by taking walks around his neighbourhood and on one of these walks he finds a stationery shop called the Paper Pagoda which is owned by a Chinese man. Amongst his purchases there is a blue notebook of an unusual size and shape which has been made in Portugal. Sid feels compelled to buy the notebook and begins his writing again using it.

Oracle Night has several storylines going on in it, which can be a bit annoying because you are just getting involved in a story when it suddenly stops, never to be resumed. There are also copious footnotes giving the back story to various characters as they are introduced, sometimes running to four half pages at a time. It means that you are going backwards and forwards quite often. I’ve never seen footnotes like that before, not even in history books.

This is the third book by Paul Auster which I have read, and although I did find the writing technique a bit strange, I still enjoyed it. My favourite book of his is still Brooklyn Follies but there are still plenty more of his books for me to read, so that may change at some point.