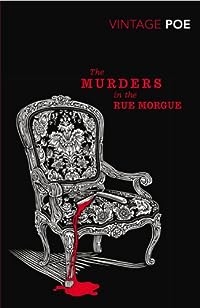 This is a book which I borrowed from my local library entirely because it’s one of those ‘cultural tumbleweed moments’ for me. Do you know what I mean? It’s something which is often referred to because we are all supposed to have experienced it and for some reason there are always things which have just passed me by – or I’ve passed them by, hence that feeling of complete ignorance whenever the subject comes up.

So I thought it was high time I got around to reading The Murders in the Rue Morgue especially as vintage crime is one of my favourite sorts of reading matter. There are two other short stories in the book – The Mystery of Marie Roget and The Purloined Letter.

Edgar Allan Poe was born in Boston, Massachusetts in 1809 and this short story was first published in 1841. It’s generally described as the first real detective story and Dupin the detective is a type similar to Sherlock Holmes. Poe seems to have set the pattern for the brilliantly observant detective with a helpful partner which so many other writers have copied. Conan Doyle described Dupin as the best detective in fiction, some Holmes fans might have argued with him on that one.

Anyway I enjoyed these short stories although I have to admit that it’s really 1930s crime fiction which is my favourite, for me that was really the golden age of crime fiction. Given that this is part of the history of the whole crime genre I’m really glad that I read them and I now know what people are talking about when they mention The Murders in the Rue Morgue. I think it must have been quite shocking when it was first published as it’s really quite gory and violent.

I’m sure I read somewher that Edgar Allan Poe was of Scottish descent but according to Wiki it was just his foster father who was Scottish. Poe did go to school in Irvine, in the west of Scotland, at one point before moving to England and then back to America. He also married his 13 year old cousin, so I’m not at all sure that we would want to claim him as a Scot!

Is there anything which you feel you should have read or experienced years ago and for some reason haven’t, resulting in those tumbleweed moments?