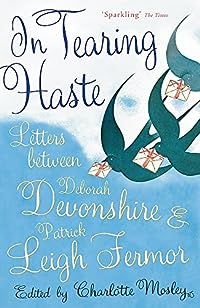 The letters have been edited by Charlotte Mosley.

I’ve read quite a few books now by both of the writers of these letters and it seemed the right time to read a book by the two of them together in the shape of letters which they had sent to each other over a period of 53 years from 1954 to 2007.

Whilst it isn’t a book to read if you don’t know either of the two writers, you’ll definitely find it interesting and entertaining if you do know them and at least some of the people who feature in the letters. That’s giving you quite a lot of scope because so many people are mentioned, obviously not in any sort of name dropping way, it’s just that they knew/know so many well known and influential people.

Deborah Devonshire is the youngest of the Mitford girls and is related by marriage to both Harold MacMillan (British Prime Minister) and John F Kennedy and people like Evelyn Waugh and Ian Fleming also have parts in the letters. It is mentioned that Mary Russell Mitford, author of a book called Our Village about rural life and published in the 1820s was actually a distant relative of the Mitford girls.

That’s all interesting in itself but there’s just as much written about unknown private people as there is about royalty or war heroes. Sometimes it’s mentions of people they just come across in life which have amused them and they feel the urge to share it with each other. They both had a good sense of humour, veering towards the daft, like when Debo asked Paddy for suggestions for spoof book titles, he gave her a long list, she only needed 28, but here are a few of them to give you an idea.

Reduced to the Ranks by D. Motion
Haute Cuisine by Aga Khan
St Symeon Stylites by A. Columnist
Intuition by Ivor Hunch
Dipsomania by Mustafa Swig
In the Soup by A. Crouton

The last one is The Ruined Honeymoon by Mary Fitzgerald and Gerald Fitzgeorge.

As you would expect from a correspondence over so many years there are ups and down in their lives and in common with Letters Between Six Sisters – it gets quite sad towards the end as the family, friends and latterly even their respective spouses disappear, much to their chagrin.

I’m wondering what to read next in the Devonshire or Fermor line. Any suggestions?