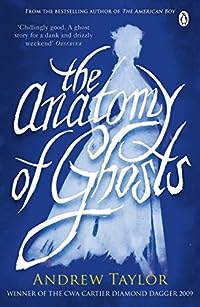 This is the first book which I’ve read by Andrew Taylor, I’m fairly sure that I had never even heard of him until Margaret@BooksPlease mentioned another of his books. I’ll definitely be reading more by him in the future as I did enjoy this one which was published in 2010.

The setting is 1786 and the book begins in London where John Holdsworth, a bookseller/binder, is living with his wife and young son. Tragedy strikes the family though and Holdsworth’s life falls apart. A chance meeting with an old acquaintance enables Holdsworth to move to Cambridge, in the employ of Lady Anne Oldershaw. She has read a book which Holdsworth has written – The Anatomy of Ghosts, in which he claimed ghosts are delusions. Lady Anne hires Holdsworth to help her son Frank who had been a student at Jerusalem College, Cambridge, where he thought he had seen a ghost. Frank Oldershaw has been locked up as a dangerous lunatic. Can John Holdsworth secure his release? Should Frank be free and what exactly has been going on in the Holy Ghost Club, a secret society which is only open to the rich, elite students of Jerusalem College.

I found this book to be a page turner, which is just as well as it’s fairly hefty at 469 pages. I don’t normally read what other people say about books before I write anything about them but I did this time, just because I had never read anything by Taylor before. I was surprised to see on Goodreads that someone mentions that it’s a short book – it makes me wonder if the reviewer had read the book at all, very strange.

7 thoughts on “The Anatomy of Ghosts by Andrew Taylor”