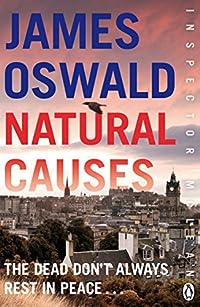 James Oswald originally self published Natural Causes as an ebook but after it became a huge success Penguin decided to publish it. Peggy Ann @ Peggy Ann’s Post has been championing his books for quite some time now, in fact I think it’s fair to say that she’s his biggest fan. But apart from that she’s also a very good judge of authors. James Oswald lives near St Andrews, just about 20 miles from where I live, so it’s quite bizarre that I first heard of him through Peggy, who must be about 5,000 miles away from here.

I thoroughly enjoyed the book which is set in Edinburgh. Detective Inspector Tony McLean is such a likeable character, I’m looking forward to reading the other two books in the series which have been written so far, and hoping that there will be far more books in the future.

McLean is an unusual member of the police force, he’s from a well-off background, brought up in a leafy part of the city, in an area of large stone built detached houses and walled gardens. Since the death of his parents when he was only four years old, McLean has been living with his grandmother and it’s near that neighbourhood that the first murder takes place. More murders follow, all very similar and the victims are well known in Edinburgh society.

McLean has been given a cold case to investigate though, after the discovery of the body of a young woman in a sealed underground chamber in an old house. It’s thought she had been murdered about 60 years previously and during his investigations McLean begins to think that her murder is linked to the spate of present day murders.

I can be a bit of a nit picker so on that note I did notice that early on in the book all women were described mainly by their hair – and there were an awful lot of redheads and ‘mops’ about. The only other thing that struck me was the name Anthony McLean – as my brother would say – ‘it disnae go’ or ‘it disnae rhyme’. In other words, they’re an unlikely combination of names, and I say that as a person with McLean as a middle name.

Apart from that Tony is almost always a ‘bad’ name, usually a bit dodgy and McLean is anything but dodgy. Just ask any teacher about names if you don’t believe me. They always scan lists of new classes and there are certain names which will always ring alarm bells because nine times out of ten they mean trouble!

For that reason I really hope that James Oswald is Jim or Jimmy or even Jamie to his friends! I’m sure he must be as he seemed like such a nice chap when I met him at a book signing in Kirkcaldy. By popular demand I’m adding this photo of James/Jim and moi as he signs Peggy’s copy of the book in Waterstones and simultaneously proves that he has no bald spot, taken by Jack, who does have a bald spot. Just don’t describe my hair as a red mop, pair of curtains – maybe! I decided to read the first book in Ian Rankin’s Rebus series, just to compare the two writers, as James Oswald is being lauded as the new Rankin. I think that Oswald is better than Rankin was at the beginning of his writing career. I’m sure all authors look back on their early work and have a bit of a shudder to themselves though.