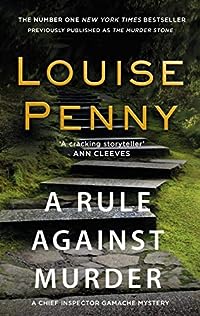 The Murder Stone by Louise Penny is the fourth book in the Chief Inspector Gamache series and I’m so glad that I decided to read them all in order as the relationships between Gamache and his detective colleagues are developing nicely.

The Quebec village of Three Pines plays hardly any part in this book although Reine-Marie Gamache does stay there in the B&B whilst her husband solves the murder which has taken place when they were on their annual visit to the auberge which they had visited over 30 years ago for the first time.

The Manoir Bellechasse is one of the finest auberges in Quebec and the Finney family has also checked in, they consist of an elderly mother with her four middle aged children, their spouses and Mrs Finney’s second husband. They use the auberge for their annual reunion and this time around it’s a bit different as a huge statue of Mrs Finney’s first husband is being unveilled in the grounds of the auberge. It’s not something which the owner of the hotel particularly wants in the grounds but a large amount of money has been paid to her to accomodate the statue.

The Finney/Morrow family is a poisonous one with even the mother being cruel and vindictive, they all look down their noses at other people, particularly the Gamaches who they have decided are too common for the hotel. They all have long memories and take particular joy in hurting each other psycholgically. When a murder is committed there’s a plethora of suspects for Gamache to question.

I really liked this one despite the fact that I worked out how the murder had been committed long before Gamache did. It was good to discover more about Peter and Clara, the artist couple in Three Pines and to find out more about Gamache’s family background

6 thoughts on “The Murder Stone by Louise Penny”