Rachel Ray by Anthony Trollope was first published in 1863. 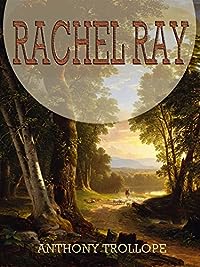 Luke Rowan is a young man who has inherited a half share of a brewery in Baslehurst and when he goes to the town with the intention of playing a full part in the business he discovers that the other partner, a much older man, is antagonised by the thought of a youngster trying to tell him how to run his business. In fact Mr Tappitt is surprised that Luke Rowan even exists as he had been under the impression that when his partner died then the business would all be in his hands. Luke realises that the beer which is brewed there is truly ghastly stuff and knows he can make far more of a profit if he can take charge.

Mrs Tappitt expects to marry one of her daughters off to Luke but he falls in love with Rachel Ray who is the youngest daughter of a widow who has two daughters, the older one is a young widow called Mrs Prime and she is a miserable evangelical Christian who enjoys thinking the worst of everyone, including her sister. When Mrs Prime sees Rachel talking with Luke she concludes that there is an improper liaison between them and the ensuing gossip coupled with the Tappitts’ anger leads to him leaving the town.

Mrs Ray and Mrs Prime both have spiritual advisors. Mr Comfort is the old vicar from whom Mrs Ray asks for advice and Mr Prong fulfills the same duty for Mrs Prime. I just love the way Trollope names his characters leaving no doubt as to what he thinks of them himself.

Mr Prong is an evangelical minister who enjoys the adoration of a group of women called the Dorcas Society, they spend their spare time making small pieces of clothing for the deserving poor, and pulling the reputations of their neighbours apart. When Mr Prong asks Mrs Prime to marry him she is at first quite taken with the idea, it would mean that she would have the highest standing amongst the other women. But since her first husband’s early death she has been comfortably off and an independent woman, it’s a situation which she isn’t keen to give up.

Mrs Prime asks about to find out if she can hold on to her own money if she marries Mr Prong and when she discovers that her money would be legally his to do with as he wishes she asks him to allow her to have control of her money. It’s a situation which he is not willing to accept and he takes umbrage, feeling that his wife should trust him with her money. Mr Comfort thinks that Mr Prong is very likely to run off with the money the minute he is married, leaving his wife abandoned and destitute, apparently it was a common occurrence.

I really enjoyed this one which was originally supposed to be published as a serial in a Christian magazine but due to Trollope’s attitude to the clergy they declined to publish it. Mrs Prime and Mr Prong are similar to the characters of Mrs Proudie and Mr Slope from the Barchester series.

I’m quite surprised that Rachel Ray is not as popular as it should be, There’s quite a lot of comedy in it and I love that Trollope was fighting for the rights of middle-class women who by law were completely at their husbands’ mercy financially and had no right to own and control their own property. Trollope’s observations on humans are absolutely spot on, he could have been a psychologist, if such a being had existed in his day, we’re lucky that it wasn’t an option open to him otherwise we wouldn’t have had his books.

At the moment I’m half-way through Orley Farm which appeared as a favourite in the Guardian’s Trollope article recently which you can see here. So far though it isn’t getting close to being one of my favourites.