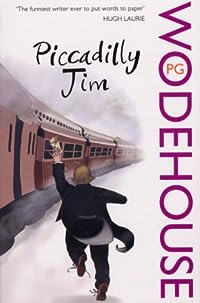 Piccadilly Jim by PG Wodehouse was first published in 1918, that date was a surprise to me as I had no idea he was writing as far back as then, but it would seem that at this time he was also working on Broadway, writing song lyrics with Jerome Kern amongst others, some people are just sickeningly talented.

I haven’t read an awful lot of Wodehouse books but of those I have read I wouldn’t rate Piccadilly Jim as being one of the best. Probably because although there are the usual wonderfully terrifying aunts, somehow the characters just aren’t that lovable.

Jimmy Crocker was a journalist at one point but when his mother marries a millionaire he gives up the work to concentrate on having a good time. He’s now famous for appearing in the gossip columns of the newspapers, instead of writing columns himself.

The blurb says: In a dizzying plot, impersonations pile on imoersonations so that (for reasons that will become clear, we promise) Jimmy ends up having to pretend he’s himself.