The main street in Buxton has some lovely buildings in it, although the shops aren’t exactly high class nowadays, it’s easy to imagine how it must have seemed when all the shops were independent ones. 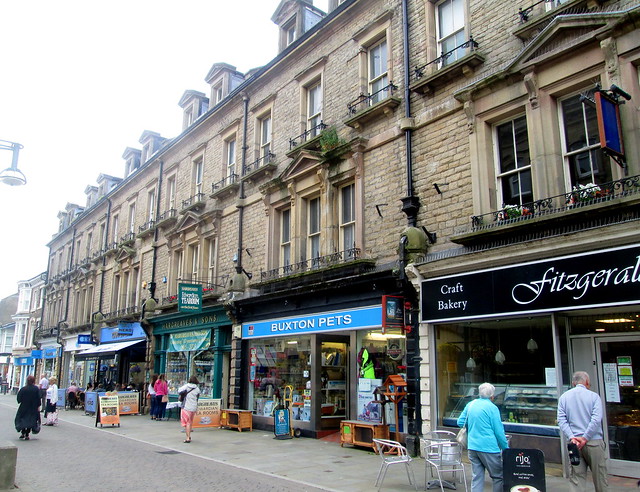 Buxton is a town which I’ve long fancied visiting, probably because it’s one of those spa towns, mentioned in Jane Austen’s and Emily Bronte’s books. In fact it’s a very old spa town and Mary Queen of Scots went there to take the water in 1573. 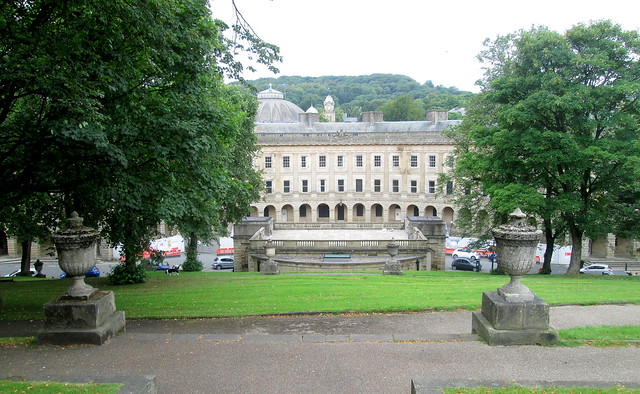 Buxton has a classic Georgian Crescent, such as I’ve only seen in Edinburgh, although Bath is probably more famous for them, I haven’t been to Bath yet though, I’m saving that for another road trip to the far south west. 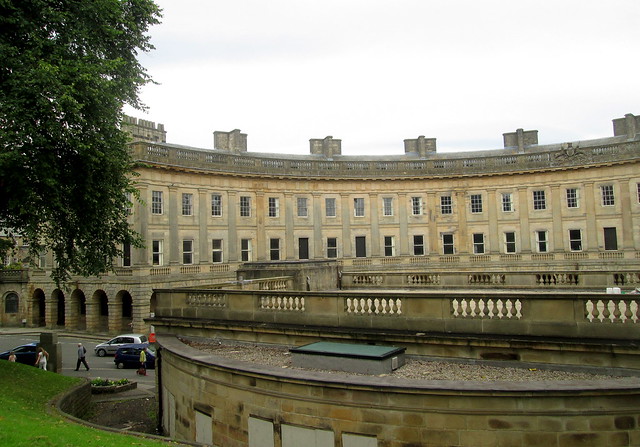 It seems that everywhere we go places are swathed in scaffolding and tarpaulin, these old places cost a fortune to maintain, so it’s just as well that the lottery fund has given £millions for the refurbishment. 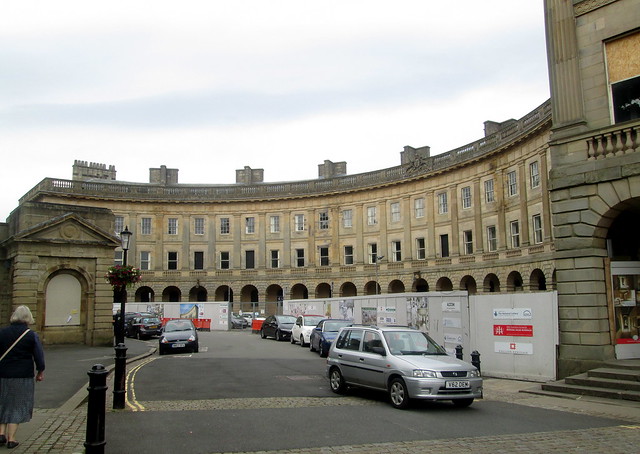 As you can see, Buxton has a very grand opera house which seems to be well used for various productions. 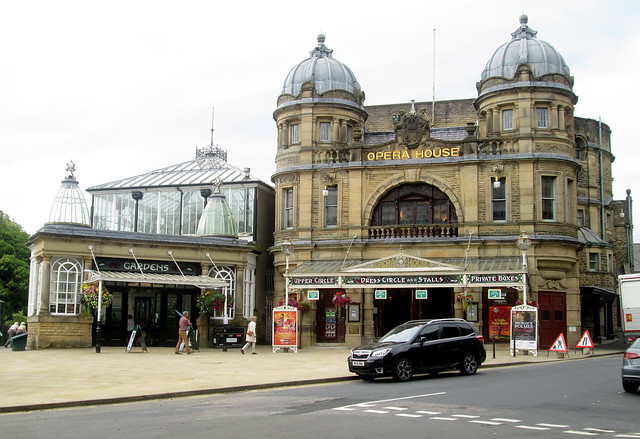 Right next to the opera house, vewry close to the centre of the town there’s a great park, beautifully set out and planted and obviously a favourite place to go for locals and trippers alike. 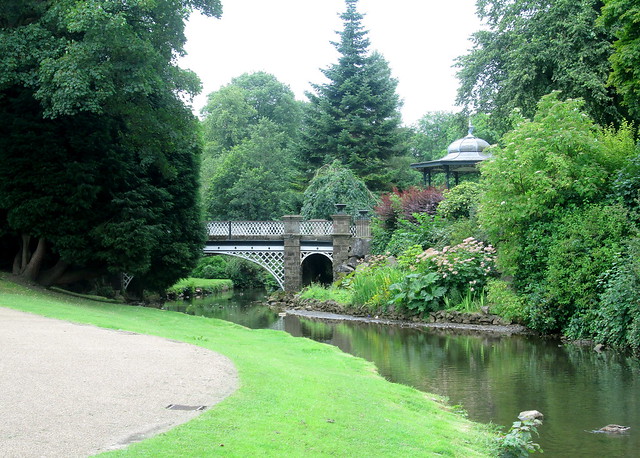 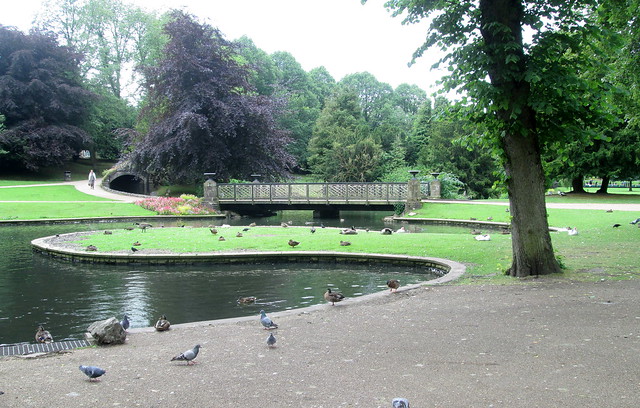 I love that rope effect edging, I’ve only ever seen it straight before, I think the curved swags are very unusual. 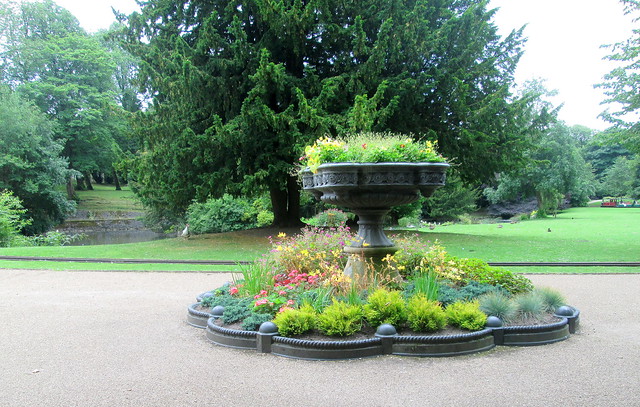 You don’t often see Victorian post boxes like this one nowadays. The nearest one to me that I know of is one in South Queensferry. 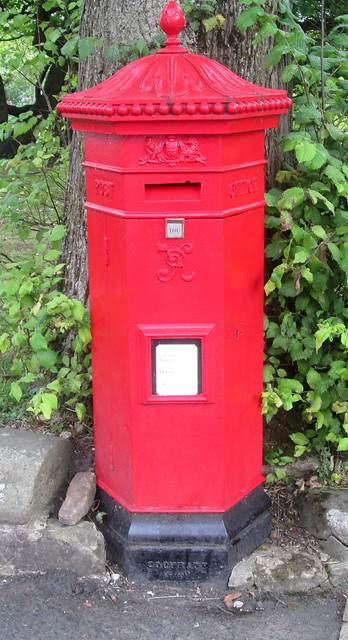 The photo below is a stitch of the spa and as you can see there are several advertising boards around the place. One of them pointed up the hill and said there was a secondhand bookshop 5 minutes walk away. So we legged it up a very steep long hill, which was definitely nearer ten minutes away – but lo and behold we reached what seemed like another town, Buxton has an upper and lower town and the upper part is even older and that’s where the high street is. I think a lot of visitors must miss that part altogether, we nearly did. Anyway, suffice to say that books were bought, by me anyway. The shop is ancient with lots of nooks and crannies, an original old cooking range still in place downstairs and – a ghost in residence – allegedly!

Buxton is definitely worth visiting, unfortunately – or maybe fortunately for us – St Ann’s Well wasn’t in working order, I think it’s being refurbished too. Not long ago Jack read Tobias Smollett’s The Expedition of Humphry Clinker and one of the characters in it said of Bath’s spa that he was sure that people had already bathed in the water they gave you to drink. Let’s hope Buxton wasn’t the same!