Marooned is exactly how I feel as the Forth Road Bridge has been closed for the last week or so and will remain closed until after the New Year. Crack(s) have been discovered. I suppose it’s a good thing that the bridge is inspected very frequently for signs of stress. I’ve never been happy going over it but over the last couple of months even Jack said that he wasn’t happy about driving over it – maybe he’s psychic! Below is a photo of the crack in the structure.

Anyway, it means that we’re marooned on the Fife side of the River Forth, and we usually go into Edinburgh once a week or so. There seems no point in going on a long detour to the Kincardine Bridge, especially as it is going to be chock full with people who just have to get to Edinburgh for work purposes.

So my Christmas shopping, such as it is, is going to be done fairly locally this year. It strikes me that some shops might be happy about that. One town which I’ll probably be visiting is Perth. I thought you might be interested to see a photo I took earlier in the year of the ceiling of Perth’s Lakeland shop. I love kitchen ware shops and I’m putting that forward as my excuse for not noticing before that the shop has a wonderfully ornate ceiling. How grand is that for a kitchenware shop?! 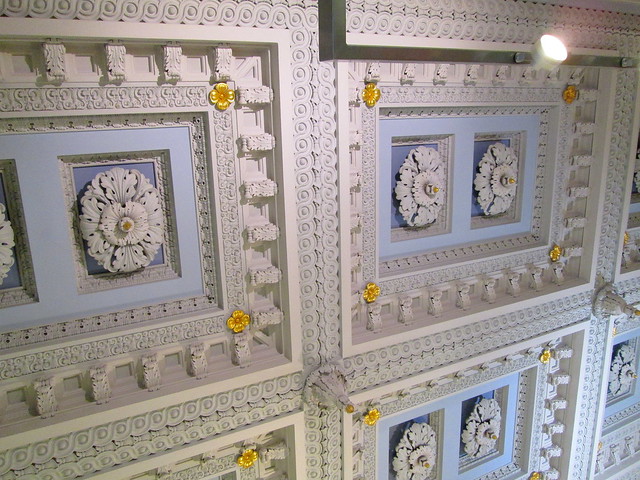 I’m usually quite good at looking up and seeing the details of buildings, although I most often scrutinise the outside of buildings. It was only when Laura mentioned that Lakeland was part of Perth’s Open Doors weekend earlier in the year that I thought I must have missed something – too intent on looking at kitchen stuff I suppose.

Back in the mid 19th century the building was the Central Bank, and it was designed by David Rhind in Italian palazzo style.

Be sure to look up if you’re visiting the shop.

4 thoughts on “Marooned in Fife”