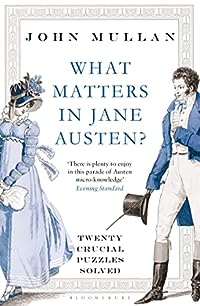 Chapter 1 is titled – How Much Does Age Matter? and I wasn’t too impressed with this one because it seemed to be aimed mainly at people who probably hadn’t actually read any Austen books, but had just watched the films or serials. I didn’t learn anything from it but as I read my way through the book I did find bits and pieces of it interesting.

However chapter 11 is titled – Is There Any Sex In Jane Austen? Really!! her books are full of sex, and even Mrs Bennet hadn’t given up all hope of ever having a son, which was not actually mentioned in the book but was clear to me even the first time I read Pride and Prejudice. Although Mullan does mention that Mrs Bennet is probably only just past 40.

It has however made me think that it’s high time I reread some of the Austen books which I haven’t read since I was a teenager.

2 thoughts on “What Matters in Jane Austen by John Mullan”