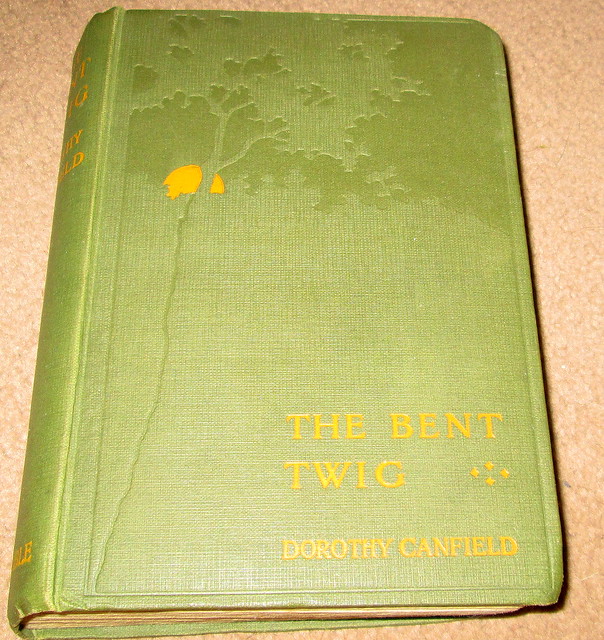 The Bent Twig by Dorothy Canfield (Fisher) was first published in 1915. I had only read one book by her before this one and that was Home Fires in France about her experiences in France in World War 1, and The Bent Twig is very different from that. The setting is mainly La Chance, Vermont.

The Marshall family is an unusual one. The father is a college professor and the mother works the land in her large productive garden, they’re an unconventional lot, having no servants, being determined to do their own dirty work. But their home is a popular meeting place for all the more interesting teachers and professors, which is an advantage for the children although they don’t know it.

Sylvia Marshall is the eldest daughter, she has a younger sister Judith and a much younger brother Lawrence. The beginning of the book reminded me so much of Louisa M. Alcott’s books, maybe it was just because it’s about a US family and it’s now historical, but when this book was written it must have been quite revolutionary as Canfield makes it plain that she is dead against separate schools for black and white children. She’s not at all happy about the way that her friends are treated when it gets to be known that they have a teeny amount of black blood in them.

The Bent Twig is about the importance of education for young girls and also the redistribution of wealth, with one very wealthy character feeling seriously uncomfortable about all the money which is earned for him by coalminers.

I really enjoyed this book although I felt it palled a bit towards the end, it wasn’t quite as interesting after the girls had grown up. Canfield was obviously keen to point out what she saw as unhealthy aspects of Edwardian society as far as women were concerned. A time when for a certain section of society money was all and some people, men as well as women were marrying for money and status. What changes?!

Sylvia has always been drawn to clothes and high society but in her heart she knows there’s more to life, but can she pass up the chance to marry for money rather than for love? With that and the subjects of equality for women and people of a different ancestry/colour, The Bent Twig must have been quite a shock for some people when it was first published.

For me it was interesting to see that colleges in the US were way ahead when it came to female education as they were giving degrees to women at a time when women students in the UK were not awarded degrees, although they were allowed to sit the exams.

I read this one for the Classics Club Women’s Classic Literature Event 2016.

4 thoughts on “The Bent Twig by Dorothy Canfield (Fisher)”