I like baking things with oatmeal in them because I can ‘kid on’ to myself that they are really quite healthy, but if you look at the amount of sweet stuff in the ingredients list you will realise that I am of course deluding myself. Och well, THEY do say that porridge oats bring your cholesterol down so these biscuits are maybe not too bad for you! Yes it does look like a cake, it’s a sort of inbetweeny texture, perfect if you don’t want anything too hard against your teeth! 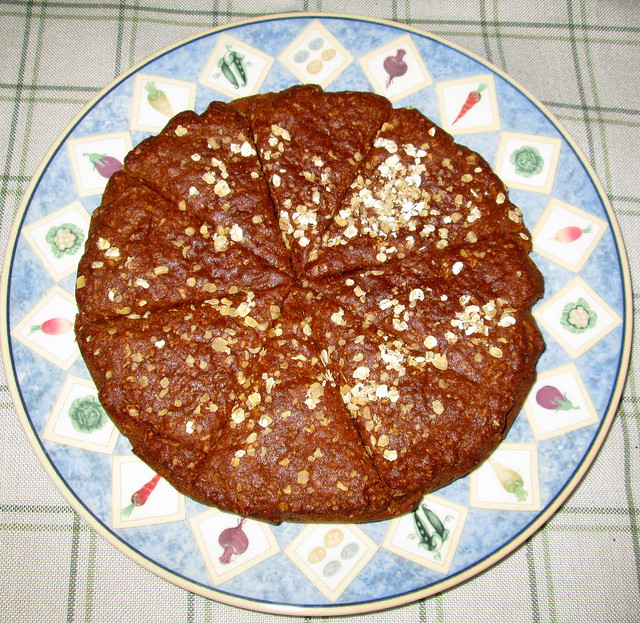 Put the flour, baking powder if used and salt together into a bowl. Stir in the oatmeal. Put the sugar, black treacle and butter or margarine into a saucepan and heat gently until just melted. Cool slightly and then add to the dry ingredients and mix well. Press the mixture into a round cake tin, I lined mine with greaseproof paper, but you could just grease the tin. Sprinkle the surface with some oatmeal. Bake in the centre of the oven at 350 F / 180 C or Gas Mark 4 for 20-25 minutes. Cool slightly, cut into wedges, then lift out carefully and complete cooling on a wire tray.

This is a recipe which you can play around with a lot, if you aren’t too keen on the flavour of black treacle then you could substitute golden syrup, which I think is called corn syrup in the US. You could also add some spices like ginger, cinnamon or nutmeg, or add some dried fruit. In future I don’t think I’ll bother to sprinkle the oatmeal on top. I also think that the next time I try this recipe I’ll leave out the 2 oz of sugar as although this is tasty I found it to be very sweet.

The easiest way to measure the treacle is of course to put the tin on your scales and take spoonfuls out of it until the weight has gone down by the required amount, 3 ounces in this case. You’re best to err on the side of underbaking I think as if you overbake it will be really hard, definitely best with custard poured over it to soften it! This batch is quite soft, almost cakey in texture, certainly not crunchy, which with my teeth is a bonus!

I had intended having a Foodie Friday last week and baked shortbread for the blogpost. I’ve made plenty of shortbread in my days, but I was given a new shortbread mould as a Christmas present, one of those pottery ones with a lovely thistle design on it, but the shortbread just refused to come out of it, despite the fact that I did as instructed and dusted it with icing/powdered sugar. Obviously I didn’t put enough sugar into it so I’ll have to have another go at that soon.