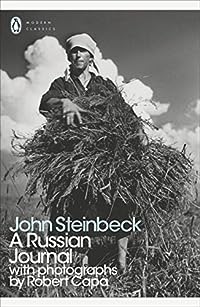 A Russian Journal by John Steinbeck with photographs by Robert Capa was first published in 1948, and it was 1947 when the two men teamed up to go on a tour around the Soviet Union, speaking to and photographing the ordinary people in their homes and communal farms.

The Soviet people suffered horribly at the hands of the German army and whole areas were piles or rubble with people living underneath the ruins, in what had been the cellars of their homes.

I find it quite amazing that they were allowed the freedom to visit people in their homes and of course they did realise later that the authorities were keeping an eye on their movements. The people were universally welcoming, particularly in the countryside where food was easier to come by and massive feasts were arranged for them and of course an awful lot of vodka was drunk.

They noticed that the people in Moscow didn’t seem to have much in the way of a sense of humour but outside that area and particularly in Ukraine and Georgia the people were very different, I suspect that that has something to do with the different climates as much as anything else.

So many men were killed during the war that it was unusual to see any men of working age at all, and any there were had often had amputations. The women had to take over the heavy work, but they were just glad that the war was at last over and peace was what was on their mind. They longed for a lasting peace but seemed to fear the west wanted to make war. This book shows that the ordinary Soviet people are like people everywhere, living in hope that things will improve and fearing they might get even worse. They are/were just like the rest of us.

Steinbeck mentions that he and Capa missed the mascara and lipstick that the women back home wore, no such fripperies adorned the faces of the Soviet women. I’m fairly sure that make-up was very much frowned on from the beginning of the Russian Revolution. That’s something that was very different from the attitudes in Britain, especially during World War 2 when Churchill said it was a woman’s patriotic duty to make the best of her appearance, for her own morale as well as the men.

This book is a really interesting read but I was quite disappointed that it has comparatively few photographs, considering that Robert Capa took thousands of photos. Sadly Capa died in 1954 when he stood on a landmine when he was covering the First Indochina War.

When I was growing up in the 1970s the Iron Curtain was very much still drawn and it seems to me that over the years from just after the war to the late 1970s things must have got harder and harder for the Soviet people instead of improving. Certainly we were always reading of food shortages and when Jack visited Leningrad in the 1960s he noticed that all the children wore clothes that were far too big for them, obviously they were expected to grow into them over the years.

I did quickly flash a photo of a tank and asked him if it was Russian and he instantly said – It looks German, but it’s probably a self-propelled gun. Is it a bloke thing? or is it a war history buff thing? I wonder.

2 thoughts on “A Russian Journal by John Steinbeck”