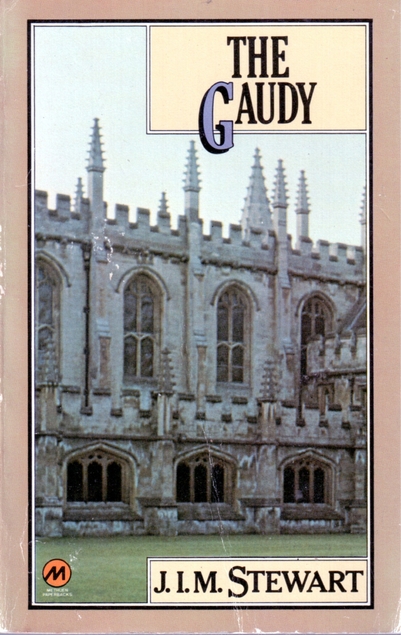 The Gaudy by J.I.M. Stewart was first published in 1974 and it’s the first book in his A Staircase in Surrey quintet.

J.I.M. Stewart is of course better known as the crime fiction writer Michael Innes, but the books he wrote under the name of Stewart are supposedly more literary, he certainly sprinkles them with quotes and Latin anyway, but that isn’t too distracting. The author was also an academic working as a lecturer at Oxford as well as other universities and in these books he uses that experience and background for his settings.

The Gaudy is the annual re-union dinner at an Oxford college and the Scottish playwright Duncan Patullo has never been to one before in the 20 or so years since he graduated. Nor has he met up with any of his old friends in that time. Duncan has been busy carving his successful career over those years. He has decided to attend The Gaudy this year and has been allocated his old room in college.

Meeting up with old friends is a bit of an eye-opener as the one who was girl mad and what would nowadays be called a ‘serial shagger’ is now a bishop and has a very low opinion of the morals of the students nowadays! Another friend has just been appointed to the cabinet in government, the least likely friend seems to be a spook in the secret service.

There are still some students around as there are re-sits going on for those who failed their exams. The story involves quite a bit of snobbery with the usual differences between the state school educated students and those who were sent to posh schools at great expense. There’s definitely a them and us thing going on between the students and this ends up in disaster for one of them.

I enjoyed this book but not nearly as much as I remember enjoying the next one in the series, The Young Patullo, which I read back in the 1970s. I never did get my hands on The Gaudy back then so I can’t compare my feelings on that one.

The Financial Times said: ‘Wit, acute observation, clever plotting …. As a gallery of characters it leaves nothing to be desired.’

If you are thinking that Patullo is a strange surname – it is actually an old Scottish surname although you could be forgiven for thinking it must be Italian or something.

I read this one for the Read Scotland 2017 Challenge – my second book for that challenge.